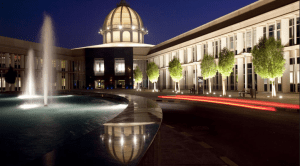 It seems so far away the time when Cairo was considered the “Mother of the universe”, Damascus as “the beating heart of Arabism” and Beirut as the “capital of Arab culture”. It was so long ago!

Cairo is nothing more than a crawling megalopolis, left to its own devices, to urban anarchy and the arbitrariness of a military-police regime. Even though Egypt has offered itself a new pharaonic museum, to house talented creators, artists and poets, it hardly sets the tone anymore.

Riyadh now claims to supplant Cairo, minus the cinema and the cabarets; Doha to dethrone Damascus, contact with Israel and Hamas in addition; Dubai oust Beirut, thanks to the talent of Lebanese executives who have found asylum, work and fortune there

The capital of Syria is no longer the goal of any road to Damascus. Enclosed on itself, the thousand-year-old city, the first capital of the Arab empire under the Umayyads, can only stand up with the resolute and not without ambiguity of support from Moscow and Tehran, without forgetting the boost of the pro-Iranian Lebanese Hezbollah. Torn down by a war that is both civil and international, it still groans under the leaden screed of a dictatorial power. However, from book fairs to literary forums, the city’s publishers still command respect by presenting Arabic-speaking readers with the best translations of great Russian, Latin and Anglo-Saxon authors.

Beirut, capital of the so-called “Switzerland of the Middle East”, is now and for a moment the capital of a failed state, without a valiant penny, the national currency having lost all credit. The former city of light, which only receives fuel from Iran and via Syria, no longer has enough to supply itself with constant electricity. Nevertheless, it has lost none of its artistic verve or its rebellious spirit, except that this “Beiruthin” spirit no longer arouses as much echo across the Arab area.

Lux Ex Oriente, “The light comes from the East”, says the Roman adage. Nowadays, this ancient Orient has moved both east and south, to the western shore of the Persian Gulf, to the east of the Arabian Peninsula. Riyadh now claims to supplant Cairo, minus the cinema and the cabarets; Doha to dethrone Damascus, contact with Israel and Hamas in addition; Dubai oust Beirut, thanks to the talent of Lebanese executives who have found asylum, work and fortune there.

In fact, not a week goes by without a major artistic event – thematic exhibition, biennial, film festival, book fair, forum or summit – taking place on the Arab side of the Persian Gulf, with great reinforcements of guests, often prestigious, from the international elite, including Hollywood.

Return of the pilgrim stick or revenge of fate: a millennium and a half after the rise of Islam, the Gulf is the new Arab-Islamic Eldorado

The cradle of Islam, the Arabian Peninsula was very early confined to the venerable status of “holy desert”, to the benefit of Damascus, then Baghdad, Cairo, Kairouan, Fez, Granada and Istanbul, where the faith of Muhammad was able to shine from all his gold. Of course, Mecca nevertheless remained the pole of prayer towards which each mosque is directed and where all believers in good faith should go on pilgrimage. A spiritual horizon therefore, but in no way a profane breeding ground for writers, painters, artists or filmmakers.

Return of the pilgrim’s stick or revenge of destiny: a millennium and a half after the rise of Islam, the Gulf is the new Arab-Islamic El Dorado, thanks, yesterday, to the faith that fell from the sky, today to the black gold springs from the basement. The former Côte des Pirates, subject to the British in the 19th century, is more popular than ever since London broke camp there in 1971.

The Sorbonne without the Latin Quarter

On the Arab side of the Persian Gulf, six states are prospering – Kuwait, Bahrain, Saudi Arabia, Qatar, Oman, United Arab Emirates, this one comprising no less than seven emirates! The new center of gravity of the Arab world is therefore one could not be more paradoxical: underpopulated and extremely wealthy. However, the Abu Dhabi-Doha-Riyadh axis has dethroned the one that once connected Cairo-Beirut-Damascus, three historic metropolises, capitals today fallen from States now out of the game. Until when?

The fact remains that in half a century, these states, which emerged from the oblivion of the Arabs and the interest of the “major” oil companies, display a standard of living equal to, if not superior to, that of Europe and the United States. United. Devoid of an archaeological heritage comparable to those of the Nile Valley, the Levant and Mesopotamia, they strive, with the ardor and impatience of suddenly enriched countries, to acquire art and knowledge, and hold on everything to let it be known.

From Abu Dhabi to Doha via Riyadh, Kuwait City and Manama, museums are flourishing, with the help of the best architects of the moment, Jean Nouvel, Zaha Hadid, Leoh Ming Pei.

Abu Dhabi has its Sorbonne and its Louvre Museum, Doha its Georgetown, Dubai and Sharjah their American University…. However, the futuristic exterior of the premises that house these prestigious institutions, their ultra-modern envy an American or European student, nevertheless bend, here and there, under the weight of a rigorous spirit of another age. It is therefore not easy to teach the Enlightenment, secularism, the historicist approach to religions…

Prices all over the place

Beirut, Damascus and Cairo have known and been able to give birth, notwithstanding the leaden screed of military-police regimes or the ruin of civil wars, great minds, eminent artists and intellectuals of international renown, Youcef Chahine, Adonis , Mahmoud Darwish, Elias Khoury, Naguib Mahfouz, Nobel Literature. Will we see as many filmmakers, poets and writers emerge on the shores sprinkled with desalinated water from the Gulf? The future will tell.

Poets and writers come and go. In fact, there is not a city that does not organize an international book fair every year, literary meetings that already overshadow those of Beirut, Cairo and Casablanca.

This has a price. And is reflected in the rise of Prizes, literature, architecture, science, education and even the fight against corruption… each State making it a point of honor to provide its own with optimal prestige. The King Faisal of Riyadh International Prize is matched by the Bahraini King Hamad Prize for Youth, the Kuwait Prize for Science, the Qatari Sheikh Tamin Anticorruption Prize, the Sheikh Zayed Book Prize, named after the “father” of the Arab Emirates United. 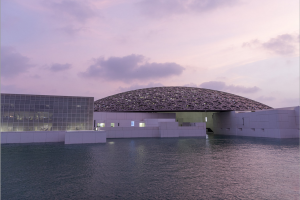 This last prize, the Sheikh Zayed Book Award, awarded on May 24, 2022, during the Abu Dhabi International Book Fair, live from the local Louvre, rewarded seven winners. Each received a gold medal, a certificate of merit and the tidy sum of 193,700 euros. As 2022 saw a record number of over 3,000 entries from 55 countries, the jury was spoiled for choice.

The Emirati poet and novelist, Maisoon Saqer won the Literature prize for her work devoted to the Café Riche, a mythical high place in Cairo, founded at the beginning of the 20th century, inspired by a Parisian establishment of the time.

Riyadh has neither the Louvre nor the Sorbonne, but it has suddenly swung from the strictest Wahhabi rigor to a hectic cultural activism, dedicated above all to quenching the thirst for movement, for dancing, in a word, for living to the rhythm of planet, to young people hitherto doomed to a cramped existence, traced with a chalk line from the cradle to the grave.

In addition to a booming international book fair, endless music concerts and other film or fashion festivals, it has art centers which, breaking with a heavy rigorist tradition, offer concerts, films, plays theater, operas…

Like the King Abdulaziz Center for World Culture, opened in Dhahran, a city hitherto devoted to the extraction and export of black gold. Supported by the state oil company, Saudi Aramco, it has a museum, concert and cinema halls, and exhibition halls.

With an aspect as unusual as it is futuristic, the site presents a mega-exhibition of a new kind in this country where Islam is too often professed closer to the letter than to the spirit.

Entitled “Hijra, in the footsteps of the Prophet”, it is inspired by classical historiography to reconstruct, to the bend and to the nearest step, the hegira, the “Migration” of Muhammad from Mecca, his birthplace, to Medina, the first capital of Islam.

The organizer does not allude to it, but the exhibition coincides with the 1,400th anniversary of this founding “Exodus”, which began on July 16, 622, which inaugurated the Muslim calendar, said, precisely, Hijri. She should “migrate” in turn, first through the kingdom and then the five continents. Next step, Jeddah, this winter, where will be held, at the same time, the second film festival, henceforth annual meeting of the authors and actors of the Arab big screen.

A priori, the Gulf offers the ideal setting for any creator, material comfort, stability, almost unlimited financial means, state-of-the-art technical device. Everything is there, only a spark is missing to illuminate this imposing device, the spark of freedom, a sine qua non condition for the development of art and knowledge, freedom to think, to create, to seek , to exchange… By including this freedom, the Gulf could then take advantage of the ancient maxim: Lux Ex Oriente!

The Gulf, new horizon or impasse for Arab culture?