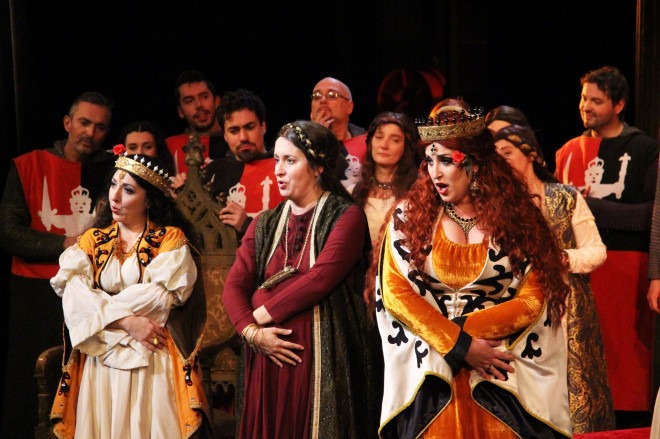 The staging created in 2008/2009 by Corinne and Gilles Benizio – alias Shirley and Dino – of Purcell’s “King Arthur or The British Worthy”, with a plot completely reworked by Hervé Niquet, returns to the Royal Opera of Versailles in general hilarity.

“Five long hours, it should have been five long hours” declares on stage, tongue-in-cheek, Hervé Niquet in a kilt. Indeed, the king arthur tonight will certainly be unconventional. Exit the booklet John Dryden, Oswald, Merlin, Emmeline as well as the procession of spirits of all kinds. Only the music of Purcell -representing only a third of the original work- will resound this evening, or almost. This new libretto adapts the score around four scenes from the king’s life: with his armies, in a forest, on an ice floe and at a banquet. This rereading is moreover even more on the tone than on the plot, and the final rendering flirts with pantomime. After the introductory speech, it’s an avalanche of gags combining a staging that makes fun of the Arthurian imagination, wacky interludes, nods to current events – with an evocation of the kilowatt hour price and Cyril Hanouna… or the choreography of Single Ladies of Beyoncé started by the sopranos during the banquet –, false hiccups of the technical teams and numbers of ruptures of the fourth wall. The result is sometimes schoolboy, but never vulgar and always funny.

Thus, beyond the comic universe developed by Corinne and Gilles Benizio (the latter only making one appearance tonight as a skier) two British references immediately come to mind. Naturally, the Holy Grail! Monty Python for the clownish opposite of the legends of the round table, but also The Play That Goes Wrong by Lewis, Shields and Sayer who, although subsequent to this production of king arthur, will have in the meantime devoted the comedy of situation related to the technical problems and the interventions of the managers. With such a bias, the main challenge is to finely balance the balance between the musical and the comic. Logical consequence, concerning the voices, the accent is clearly put on the comic interpretation and the action, and not on a too wise musicality, but the sound interferences however remain anecdotal during the musical moments.

As King Arthur, the bass-baritone Douglas Williams lacks projection in the first minutes, but quickly unfolds its voice in all its lyrical range, and its timbre remains warm even in the bass. If the high harmonics are slightly lacking at times, this is compensated by the length of the phrasing and impeccable highs on the vocalizing parts of his role – even if the technique is naturally more forced there than for a tenor. In Air dufroid, the articulation as well as the projection are noticed, despite a very impressive dramatic and choreographic commitment.

Mathias Vidal – having already cut his teeth in the platy staged by the same trio – demonstrates a surgical precision in his vocalizations and an obvious pleasure in taking the opposite view of the original characters. If the phrasing is sometimes jerky and lacks musicality at times, this is in line with the general will of the production: its light range and its good articulation will this evening be at the service of acting and stage presence. In comparison, Romain Dayez, more reserved on the game, offers more musical harmony, concentrating the warmth of its timbre and the agility of the technique as well as its excellent projection to obtain a more controlled rendering. In the duets, the accomplices become hilarious, and sometimes choose to sacrifice everything to the comedy of the situation, singing for example voluntarily as if they were drunk during the banquet (all dressed as monks).

Among the sopranos, the same pseudo-antagonism can be observed. Thereby, Benedict Tauran, past its antics and outrageous nasality in the forest scene, instantly creates contrast by resonating its round, warm and powerful timbre – including in the bass – and demonstrates great precision in the vocalizations. The comedy is never far away, she will go so far as to shout when her court lady character is strangled by a sovereign in an advanced state of intoxication. Chantal Santon-Jeffery, as for her, is illustrated by the warmth of her timbre and the grandeur of her breath in the longest recitatives. She also reveals all her lyricism and delicious reliefs in her piano during his banquet scene aria. During the numerous duets, the rhythm and the musicality are there, even if the last two bars of the “Chanson d’amour” – formerly the air of the sirens – could have benefited from a little more precision.

The Spiritual Concert is at the party tonight and deploys treasures of musicality and humor. The choir, always harmonious, demonstrates constant commitment and general precision, highlighting certain passages. Not hesitating to be clownish at times – the image of buckets on heads on the way piano of Come if you dare with… a ballet of broomsticks or even the choir with its mouth full at the banquet remain in memory – he also gives himself to heart’s content in the choreographies. The musicians also take part in some dialogue and are a comedy character in their own right, dressing up in winter clothes for the Cold Song, circulating a bottle of wine during discussions between Hervé Niquet and Gilles Benizio acting as an aspiring stage manager in the limelight. The orchestra, moreover, is not to be outdone, and offers a result that is simply baroque. With flawless precision and energy, it brings out all the shimmering colors of the Purcellian score, even when playing in total darkness!

Ultimately Hervé Niquet, author of a remarkable recording in 2004, is tonight more than a chef. From Monsieur Loyal, to chansonnier – resuming Air pour Célestin from The White Horse Inn during scenery changes. He offers this evening, in addition to his precise direction, several giggles to the room, going to interrupt Gilles Benizio cleaning the stage with a blower while he is still in a kilt (the public can easily imagine the risk incurred), changing pants three times during the show and performing a traditional Tyrolean choreography among other pasquinades. His contributions to the evening are also musical, for example adding bells to the original score when Father Christmas appears on stage or, more discreetly, by asking some of his violins to add tremoli to simulate shivering in the Cold Song.

It is logically on a chaconne drenched in applause that this baroque trompenade ends with the parade of the choirs in pairs and main actors, but also of the technical teams. The music may not have reigned alone tonight, but that is not the case in the original work after all. The good mood, the laughter and the obvious pleasure of being there from the artists will have been communicative and it is therefore logical that a good part of the public cheers standing up during the greetings: this evening the show was festive and the party was a show.