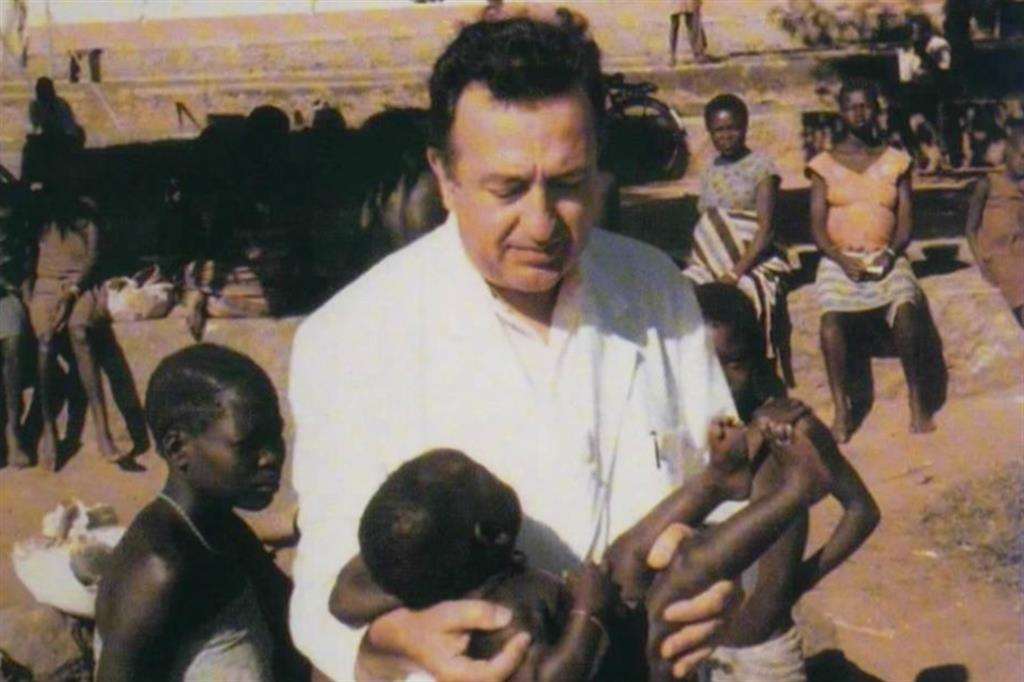 Remembering Father Giuseppe Ambrosoli is a precise duty of the soul for his confreres. Above all, on the occasion of this Sunday’s celebration in which he will be proclaimed blessed in his mission of Kalongo, in Northern Uganda. In fact, it is impossible not to preserve the memory of a man in love with life, a love fueled by an infinite passion for the Kingdom of God and an uninterrupted missionary planning. Comboni doctor and priest, inexhaustible source of ideas and initiatives, Father Ambrosoli, as well as never dull and generous interlocutor of ideas and suggestions, was not afraid to talk about death but fought to keep it away from his patients, challenging every kind of disease. For him, medicine was a concrete way to make the Gospel intelligible and the testimony expressed in the operating room or in the ward was overwhelming.

His fame spread almost everywhere throughout Northern Uganda and there are numerous anecdotes that outline his popularity. The writer, for example, once received the diaconal ordination in May 1985, one day went to impart baptisms in a village, near the leper hospital of Alito, to a large group of catechumens. The first of them claimed to be baptized with the name of “Doctor Ambrosoli”. To the objection whether it weren’t more convenient to be called “Giuseppe”, he strenuously opposed it because it was “Doctor Ambrosoli” who had saved his life in his hospital.

The fact is that in those parts there are many who bear that name. What most struck Kalongo’s patients was Father Ambrosoli’s extraordinary ability to instill hope. It was not a question of simple professional coherence but of total transport and participation in what he was witnessing, and not for mere outward appearance but from the depths of one’s being, so much so as to arouse religious respect in people.

Born on 25 July 1923 in Ronago, in the province of Como, he was one of the sons of the founder of the homonymous honey company. Strengthened by a solid spirituality, he enrolled in medical school with the desire to leave for the mission. “God is love, there is a neighbor who suffers and I am his servant”, he explained to his family. Having obtained his specialization in tropical medicine at the “Tropical Hygiene” in London, with enthusiasm and without regrets, he left behind the ease of family conditions and a medical career that promised to be brilliant in his homeland.

He entered the Comboni novitiate of Gozzano (Novara) on 18 October 1951 and four years later, on 17 December 1955, he was ordained a priest by the then archbishop of Milan and future Pope, Giovanni Battista Montini. On 10 February 1956 he left for Uganda, with destination Gulu (capital of the north of the country). From here he moved to Kalongo in the extreme east of the current archdiocese of Gulu. When he arrived there, he found a small maternity center and a dispensary that he transformed under his guidance into a real hospital.

In 1959, again in Kalongo, with the help of the Comboni sister, Sr. Eletta Mantiero, she founded the School for midwives and nurses. Then in 1972, he also took charge of the leper hospitals of Alito and Morulèm. The only intervals in which he was absent from Kalongo were the short periods represented by holidays, often transformed into authentic tours de force to increase his multiple skills in the surgical field and raise funds for the hospital complex.

The Comboni Sister Caterina Marchetti describes a day of work for Father Ambrosoli thus: «He began with the operating room around 7.30 in the morning and ended at 1.30 and sometimes even later. He was returning for lunch; then a short rest break and then in the dispensary to visit the sick until 8 in the evening. Immediately afterwards he would review the morning’s work and then go to dinner. Afterwards he was seen reciting the Rosary walking in the courtyard of the mission, then he went to church and stayed there for a long time. Before going to bed he reviewed the accounts or wrote letters. His sleep hours were very few. We often called him on the maternity ward at night for obstetric emergencies. One wonders how he did it, also because he dedicated a lot of time to prayer ».

On the afternoon of March 27, 1987 he died in Lira, 44 days after being forced to abandon his Kalongo because of the rebels. “Father Ambrosoli certainly helped to fully include the medical service in evangelizing practice, which at the time was above all understood as an announcement through the Word and the sacraments in view of the foundation of a local Church”, wrote the postulator, Father Arnaldo Baritussio .

Blessed Ambrosoli’s work has found a happy continuation in the efforts lavished by another doctor-missionary, Father Egidio Tocalli (who reopened the hospital in 1990) and by the Ambrosoli Foundation, set up in 1998 by his family members and by the Comboni Missionaries. Which is why even today Kalongo’s patients cannot help but say: «Apwoyo, Brogioli!» Thank you Father Ambrosoli!