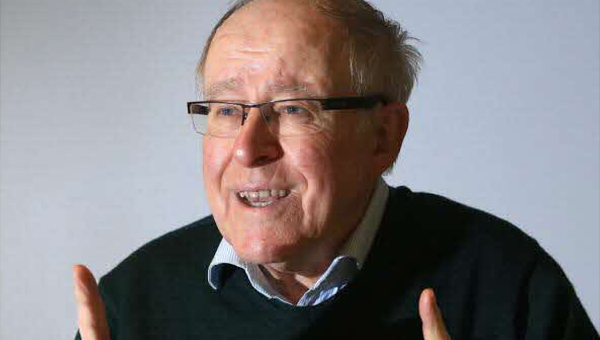 Fr. Yves Ledure scj. A personality who had a strong influence in the knowledge and reflection on Father Dehon and the Dehonian spirituality. The personal memory of Fr. Stefan Tertünte, former director of the Dehonian Studies Center in Rome.

After p. André Perroux scj, another personality has left us: Fr. Yves Ledure scj. He had a decisive influence on knowledge and reflection on Léon Dehon and on Dehonian spirituality in our Congregation and beyond.

As a German Dehonian, I could write extensively about the special relations of fraternal friendship he had with the German Province of the Congregation, and his philosophical work would also be a topic in its own right.

In this brief contribution, however, I would like to underline some accents of his work, which perhaps clarify – even if incompletely – the meaning that Fr. Yves Ledure had for the ongoing process of research and identification of the identity of the religious community and that he will continue to have even after his death.

The return to the sources

In the Congregation we have become accustomed to the green and brown volumes of the Notes sur l’Histoire de ma vie (since 1975) and of Notes Quotidiennes (1988). In this process it has been somewhat lost sight of the fact that several years earlier, in 1964, at least the first three volumes of Notes Quotidiennesstill typewritten at the time, had been published in the French Scholasticate of Lyon with a broad introduction by the young priest Yves Ledure, then thirty years old.

His main academic expertise was philosophy, which he taught and researched mainly at the Institut Catholique de Paris. He was not a philologist, nor a historian, nor a theologian with a higher education than normal for priests. However, the passion of his life was to get to know better and better the person of Léon Dehon, his personality, his work and his spirituality, especially through the study of the texts of the origins and contexts.

A place for Dehon in the public sphere

Yves Ledure has always tried to have his writings on Dehon published by authoritative publishers. In this regard, the contacts developed during the university career have been very useful. He didn’t care about personal vanity.

Rather, he wanted to make Dehon accessible to as wide an audience as possible and promote the perception of Dehon by other scholars. Only if there were widely published works on Dehon would Dehon be not only noticed, but also further studied and cited. “Petite vie de Léon Dehon“, Published in 1993 by Desclée de Brouwer,”Prier 15 jours avec Léon Dehon“, Published in 2003 by Nouvelle Cité and”Le Père Léon Dehon 1843-1925. Entre mystique et catholicisme social“, Published by Les Editions du Cerf in 2005, made Dehon accessible to a wide audience in a way that the Order’s purely internal publications could never do.

A place for Dehon in academic research

Yves Ledure has always been concerned with giving Dehon a place in the academic world, especially in historical research. He knew it: seekers had to be offered good reasons and good opportunities to deal with Dehon.

A cornerstone of these efforts was undoubtedly the colloquium he organized on the occasion of the centenary celebrations of the Rerum novarum, in which the great names of the historical sciences of the time participated and explored Dehon: Pierre Pierrard, Dominique Durand, Jean-Marie Mayeur, Philippe Levillain and others. In 1992 Ledure published the contributions of the interview with the title “Rerum novarum en France. Le P. Dehon and l’engagement social de l’Eglise“, Published by the Editions universitaires of Paris.

The value of the publication consists not only in the numerous contributions that deal with Dehon’s social and civil commitment, in some cases at a high level. Without these and other publications already cited, Dehon would never have been mentioned repeatedly in the standard work of Church history “Histoire du Christianisme“, In volume 11. And otherwise a Pierre Pierrard would never have included him in the list of”Ces croyants qui ont fait le siècle“(Bayard, 1999).

Non-beatification: setback and mission at the same time

I have never personally spoken with Fr. Ledure of how he lived the non-beatification of Fr. Dehon in 2005. No doubt it was also a major setback for him and his efforts. After all, he had written two publications, “Prier 15 jours avec Léon Dehon“In 2003 and”Le Père Léon Dehon 1843-1925. Entre mystique et catholicisme social“In 2005, precisely in view of the beatification.

One can imagine that it also struck him personally when the French newspapers spoke of Dehon as the “anti-Semitic priest“. He did not want to simply accept the too general accusation of anti-Semitism. While the historical commission announced by the Vatican never embarked on its work, Yves Ledure organized in Paris, amid great ecclesiastical difficulties, a seminar whose works were published in 2009 by Desclée de Brouwer / Lethielleux with the title “Catholicisme social et question juive. The case of Léon Dehon (1843-1925).

Once again, both qualified Dehonians and well-known historians have addressed this aspect of Dehon’s work: Jean-Marie Mayeur, Jacques Prévotat, Joseph Famerée scj, Marcello Neri scj, Jean-Yves Calvez sj, Philippe Boutry etc. they have shown that the question had to be considered in a much more complex and differentiated way and have reduced the generalized accusation against Dehon.

But nobody wanted to hear it. It remains irritating that the academic world did not want to consider this volume and, to put it bluntly, boycotted it.

His work: a question of identity

Even for lack of sufficient knowledge, I am unable to grasp the work of Fr. Yves Ledure. He has written many very useful biographical writings on Dehon. Furthermore, he has repeatedly made hermeneutic attempts to bring the dialectic between collective memory and ever new insights – not only historical – into current descriptions of the Dehonian identity, probably more evidently in “Le Code du Royaume. Léon Dehon et la spiritualité du Coeur de Jésus“, Verlag Heimat und Mission 2001.

Some things in it have been criticized, such as what he considers the central, but ultimately too ontological understanding of the priesthood, which remains too close to the ideas of theEcole française de spiritualité. It is precisely the effort postulated by Ledure to be close to Scripture and post-conciliar theology that is not implemented with sufficient coherence for a real spiritual refoundation (réfondation spirituelle) in this point.

I would like to limit myself to a theme that has crossed Ledure’s work from the beginning and that still concerns us today. Already in 1968, in a German-language publication, the then 34-year-old had expressed his unease about the relationship between the (social) apostolate and spirituality in Dehon.

For him it is an almost sudden juxtaposition, a dichotomy, especially since the devotion to the Sacred Heart, as he perceived it at the time, aimed too much at personal sanctification and escape from the world. In subsequent years, he repeatedly tried to reformulate the spirituality of the Sacred Heart and the identity of the Dehonian as a religious priest, but for a long time he did not allow Dehon’s social commitment to be an identity part of the identity of the order.

This can perhaps also be seen against the background of ideological conflicts, especially in the 1970s. What has always struck me about Yves Ledure is his ability to correct himself on this point and to say or write it openly. In “Prier 15 jours avec Léon Dehon“(2003), he confesses:” It has long been believed that there was a break between the life and work of Father Dehon, a sort of incompatibility of different orientations. On the one hand, an autonomous devotion to the Sacred Heart, on the other, its social commitment to justice and democracy according to the social teaching of the Church. This reading, which I myself have supported, indicates a contestable conception of the spirituality of the Sacred Heart… ”(p. 84s).

On the contrary, he emphasizes that “Dehon’s meditation on the suffering Christ is always at the same time a reflection on the destiny of humiliated humanity and compassion for all those who suffer in life. Thus we understand better that the spirituality of the Heart of Jesus led Leo Dehon to work constantly for those who bear the cross of life most heavily and painfully “(83 ff.).

And then he goes on to say that concepts such as reparation and sacrifice have meaning only as an expression of agape, active love, which finds its culmination in the Eucharistic life. From that moment on, Ledure’s contributions virtually invoke the unity between spirituality and social commitment – for him above all social commitment – that the Dehonians must rediscover and formulate.

Yves Ledure’s latest article for our magazine Dehonianain 2012, even brings the anxious question: “Léon Dehon entre mythe et histoire. L’oubli du sociétal?“, The concern that social and civil commitment (sociétal engagement) in practice and in apostolic and spiritual reflection, which for him is now part of the Dehonian identity nucleus, may fail.

The last General Conference of the Congregation in the spring of 2022 would probably not have met the intellectual requirements of a Yves Ledure. However, he brought to the attention and heart of all of us the ways of living and understanding that saving unity between social and corporate commitment and the spirituality of the heart of Christ, for which Yves Ledure has always fought.

Professor of philosophy by profession, seeking an intellectually honest Dehonian identity in his heart, which enriches beyond his death. In this spirit, in recent decades he has repeatedly encouraged and guided the young confreres of his province on Dehonian themes in master’s and doctoral theses.

With all its hardships, the Congregation can look with gratitude on a nearly lifelong effort to understand the Dehonian vocation today.