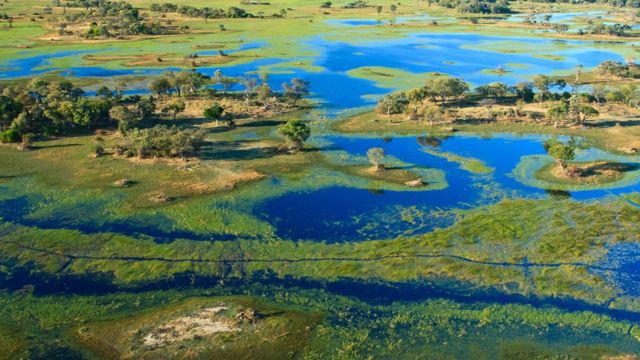 As politicians gather to discuss ways to cut carbon emissions, the descendants of southern Africa’s original inhabitants worry about an oil and gas exploration project.

Religious leaders have also spoken out, with one saying the project is a sin and calling on COP27 delegates to restrict the activities of fossil fuel companies.

In Botswana, a southern African country, lies one of the largest inland deltas in the world, a landscape that the United Nations has described as “exceptional” and “rare” in its beauty.

The Okavango Delta is an oasis in the heart of the Kalahari Desert. Its waterways and floodplains are home to some of the world’s most endangered large mammal species, such as black rhinos. The plants, birds, fish and animals that live there make up a particularly delicate ecosystem.

It is so precious that it has been declared a World Heritage Site.

But it is feared that it is under threat, due to fossil fuels.

A Canadian company, Reconnaissance Energy Africa (ReconAfrica), believes that the subsoil of northern Botswana and neighboring Namibia could harbor a large amount of oil and gas.

It now holds exploration licenses for an area of ​​34,325 km2 straddling the border of the two countries. Three test wells have already been drilled in Namibia.

“The project is a sin, and a grave sin,” the recently retired Anglican Bishop of Namibia told me.

Luke Pato spent the last months of his stay in Namibia campaigning against the project with a group of other religious leaders. As we sit in the garden of his house in Johannesburg, he explains to me why.

“Jesus said, ‘I came that they might have life and have it abundantly.’ He would never side with that which has the potential to destroy life, to destroy the environment in which people live in. I have no doubt that Jesus would find a way to pull the rug out from under those who still want to engage in fossil fuel exploration.

“I would like the drilling to stop, for this company to take its machines and go.”

Bishop Pato is concerned about the effect drilling in Namibia could have on the underground water reservoirs that connect to the Okavango River. This river runs along the Namibian border north of the drilling sites and carries water to the neighboring Botswana delta.

ReconaAfrica claims that its exploration poses no risk of pollution.

Mwanyengwa Shapwanale, communications manager for ReconAfrica’s Namibian branch, says the company is working with the Namibian government “to ensure that not only do we comply with what is expected of us when it comes to protecting the environment, especially water, but also to make sure we go further.”

But Bishop Pato also has another concern: he believes that the exploration of African natural resources by a Canadian-owned company amounts to a “new wave of colonialism”. He wants COP27 delegates in Egypt to come up with “a resolution that would tell companies that drill outside of their own country not to do so.”

The Namibian government dismissed his criticisms, telling the BBC it had a responsibility to develop the country’s natural resources for the benefit of its people.

“Relinquishing this responsibility would be unwise. Therefore, as a sovereign democratic country, Namibia will explore and develop its natural resources in a sustainable manner,” the government says.

The question of whether African countries should continue to exploit fossil fuels is emerging as a divisive point at this year’s COP. A number of them argue that they should be free to exploit oil and gas fields, in order to develop their economies and end energy poverty.

But Bishop Pato is not convinced.

“When there are potential cleaner energy sources, why go back to fossil fuels?” he asks.

“We don’t want this project to happen”

In Botswana, these concerns are relayed by the descendants of the first inhabitants of southern Africa: the San.

For hundreds of thousands of years, San communities lived in what is now southern Africa, leading a hunter-gatherer lifestyle. About 90,000 remain today, concentrated in Botswana, Namibia, South Africa and Zambia.

The key to their culture and belief system is to live in harmony with nature. San spirituality is inextricably linked to their relationship with the land, plants and animals.

“We don’t want this project to happen,” says Diphetogo Anita Lekgowa, a San activist from Botswana who is attending COP27 in Egypt as an indigenous rights activist.

“We are concerned about the environment and the protection of our natural resources, because once [le forage aura commencé], there will be many changes. The animals will migrate, and we fear losing our native plants.”

The Botswana government has declined several interview requests, but mineral resources minister Lefoko Moagi has previously said that “the terms of the license require ReconAfrica to preserve the natural environment as much as possible. [et] minimizes…damage to natural and biological resources”.

The government also pointed out that no drilling is currently planned in Botswana.

But Anita fears that if the presence of oil or gas is confirmed, the drilling will eventually take place. Like Bishop Pato, she is worried about what this could lead to.

She is from the River San people, who believe that the river that feeds the Okavango Delta was given to them by the gods because it never runs dry.

She grew up in the village of Khwai, on the edge of the delta, and her elders’ reverence for the river was an integral part of their lives.

“Our parents used to go to the river dance, connecting with the gods, thanking the gods. Our culture, our way of life, our spirit is linked to the river.”

If the river and the delta were harmed, says Anita, it would “destroy people emotionally”.

“Why is our government interested in oil when there are other things to do that can bring in revenue?”.

The Mountains of the Gods

Across the delta, in northwest Botswana, lies another World Heritage Site – a series of large rock formations so sacred to the San that they are called “the mountains of the gods”.

The hills of Tsodilo are where the San believe the spirits of the ancestors reside, and it is through them that they connect with the Supreme Being. The hills contain more than 4,500 rock paintings, some believed to be over 20,000 years old, which trace the history of the San people.

San Gakemotho activist Wallican Satau, who lives in the town of Shakawe, north of the hills, tells me that for the San, the hills are “like Mecca for Muslims”.

Exploration is prohibited in a 20 km buffer zone around the hills, but this has done little to allay Satau’s fears. “How could I not worry?” he said.

He particularly fears “tremors or earthquakes” which could cause the paintings to be destroyed.

Across southern Africa, San people claim their communities have been dispossessed of their land.

“We are already marginalized, we are poor, we have lost land, and now the Canadians are coming,” Satau said.

Ms Shapwanale of ReconAfrica points out that the project is still in its infancy in Botswana and that the company is keen to hear from the communities affected.

“We listen to the San community, we make constant efforts and we go above and beyond to ensure that they are consulted.

“We listen to them. And we hear, and we get advice on the right way to do things.”

But, she says, other nations have been trusted to explore for oil and gas, and that has helped them develop their economies.

“If the Namibian and Botswana governments invite us, I think it is only fair that these two nations should also be allowed to explore natural resources for the benefit of the people, including the San community.”