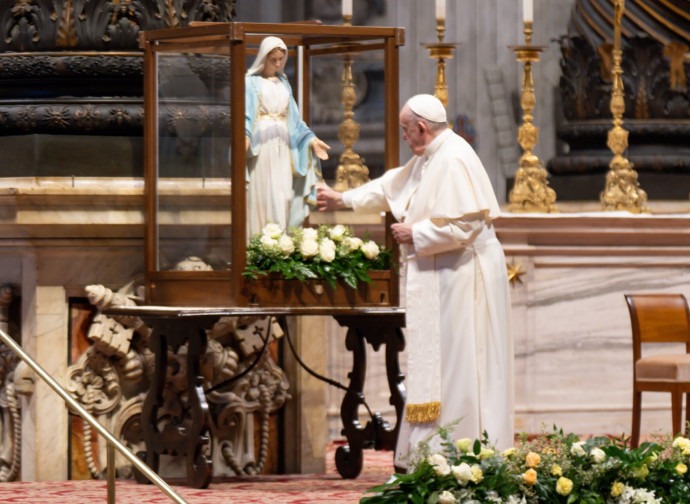 Almost two centuries ago, Our Lady appeared to Saint Catherine Labouré, giving the world the Miraculous Medal, in an era as difficult as ours. Through a pilgrimage to the parishes of Italy, the Virgin continues to bestow graces, today as then.

In October, the pilgrimage of the Virgin of the Miraculous Medal resumes throughout Italy in anticipation of 2030, the year in which the bicentenary of the first apparition of the Virgin Mary to Saint Catherine Labouré will occur. To illustrate the initiative, which is called Three days with Maria and finds hospitality in many Italian parishes, is Father Valerio Di Trapani, superior of the provincial house of the Congregation of the Mission (the “Vincentian” missionaries, founded by St. Vincent de ‘Paul) and of the Leonian Apostolic College in Rome:

“There Three days with Maria started in 2020, the year in which the 190th anniversary of the apparitions of the Blessed Virgin Mary to Saint Catherine Labouré was remembered. To us Vincentian missionaries it immediately seemed evident a link between the era of the apparitions and the period that humanity was experiencing: in fact, at the beginning of the diffusion of the miraculous medal, coined on the indication of the Virgin Mary, in Paris there was a serious cholera epidemic and the name “miraculous” was attributed by the people because whoever wore the medal, prodigiously, was spared from the dangerous disease ».

“We Vincentian missionaries, members of the religious family to which Saint Catherine belonged – he continues – we therefore organized a meeting with the Vincentian Family of Rome to have the statue blessed by Pope Francis and take it on pilgrimage to all the communities that would have wanted to host it, as a sign of Mary’s closeness to her children at this time. pandemic from Covid. But as is known, from November 2020, the audiences of the Holy Father were suspended due to the increase in the infection and we were allowed to go only in three for this event that the Pope particularly cared about. He wanted to encourage us to promote the initiative, placing his rosary around the neck of the sacred effigy of the Virgin Mary and inviting us to go for free wherever we were invited ”.

«Since that moment, a lot of requests have rained down, so numerous, that a group of 15 Vincentian missionaries was committed for a year to accompany the statue of the Virgin Mary, spiritually animating the over two hundred communities involved throughout Italy. It seems to me that all this was a surprise that the Virgin Mary wanted to reserve for us ».

Finally, Father Valerio recalls the meeting with Pope Francis: «Pope Francis asked us to continue, opening ourselves to the action of the Holy Spirit … and so we did. We have gone from a “quick” pilgrimage to a proposal that would allow to animate the community by helping it to reflect on being called, inhabited and sent by God to joyfully bear witness to the Gospel like Mary. This proposal, which we have called “Three days with Mary” allows many to approach the sacrament of reconciliation, to welcome and meditate on the Word and the missionaries involved try to meet all the sick to bring the hope of the Gospel. All this is a gift of grace that rains on the communities and that is arousing so much good and the birth of groups that wish to continue the Vincentian Marian spirituality at the service of the most fragile ”.

Some of the stages of Three days with Maria

1.Ischia the Good Shepherd from Sunday 2nd to Wednesday afternoon 5th October.
2. Ischia Campagnano from the afternoon of 5th to Saturday evening of October 8th.
3. Ischia Casamicciola from Sunday morning 9 until the afternoon of October 12.
4. Vinci (Florence) loc. Apparita – Parish of S. Pantaleone and Ns. Lady of Fatima from Thursday 13 to Sunday 16 October.
5. Meta di Civitella Roveto (L’Aquila) – Parish of SS. Trinity from Monday 24 to Thursday 27 October.
6. Civitella Roveto (L’Aquila) – Parish of St. John the Baptist from Thursday 27 to Sunday 30 October.
7. Casagiove (Caserta) – Church of San Michele from Wednesday 30 November to Saturday 3 December.
8. Como – Church of the Gesù from Monday 5th to Thursday 8th December.
9. Lauria (Potenza) – Parish of St. James the Apostle from Wednesday 3 to Saturday 6 May.
10. Fondi (Latina) – Cathedral of San Pietro from Wednesday 17th to Saturday 20th May

For those wishing to embrace this initiative in their own parish, they can send an email to Father Valerio of Trapani. padrevaleriocm@gmail.com

Three days with Mary: a heavenly pledge in times of crisis