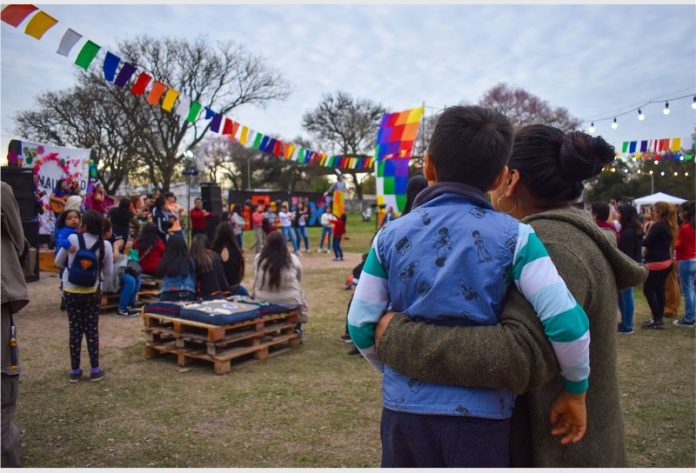 The Cacique Pelayo school conceives its educational task as an inclusive, intercultural and inter-religious dialogue proposal, which is assumed from the Franciscan spirituality in dialogue with the religious worldview of the Qom people, tries to manifest the richness of diversity and commitment to the construction of a respectful citizenship of cultural differences from the Franciscan options of justice, peace and ecology.

It is in this framework, and making the look of the indigenous worldview that recognizes the cycles of life by contemplating the signs of nature, that the Nauoxo fair (early spring qom) arises, as a fruitful and abundant time in the which seems that the earth wakes up. Everything is celebrated: the flowers of the lapacho, the gold in the river, the taqai in the mountains, the carob and the honey, everything is a reason for singing, dancing and gratitude. This is a special year, because after the isolation by Covid-19 and virtual and semi-virtual proposals, the Nauoxo celebration is once again fully face-to-face.

This year, during the months of August, the importance of the elements of nature (water, fire, air and earth) was disseminated with the community as part of its foundation and the possibility of bringing the Qom language closer to the Creole population.

Activities for the school community

Since August 30, specific proposals were made for the educational community of Cacique Pelayo. The institution has a secondary school with an artistic and audiovisual orientation, for which a Fogón de Arte was experienced with the presentation of the annual productions of the students. Also another stove with the families of the primary level.

The activity “Childhood in nature, Seloigui na aviaq nache inlotec. I look at the mountain and I wake up” by Victoriano Lencinas, brought together walks, stories, cooking and a stove.

There was also the national premiere at the school of “Nallitexa’at – they look at each other”, the audiovisual short film made in the fifth year of high school to participate in a film show organized by the French Cinematheque, an experience that has already happened in years previous.

The fair and indigenous women

For Indigenous Women’s Day -September 4- “Mujeres que Bajan” was held, a theatrical representation of the poetry “Mujeres Estrellas” by qom teacher Analia Medina. Plus, a conversation by community leaders from the secondary level.

During the fair, there will also be murals, exhibitions and other artistic expressions in reference to the indigenous women of the community. In addition, there will be sales and entrepreneurship positions, as well as a wide variety of invited people and proposals to share.

Fabián Roja, director of the Professional Training level, pointed out: “We invite the entire community to celebrate, to be together since we are back with face-to-face events. In this complex context, it seems important to us to have spaces to celebrate, to be able to learn from the native peoples to get together near the fire and share.”

This September 11, the Nauoxo fair returns to the CEF Intercultural Cacique Pelayo