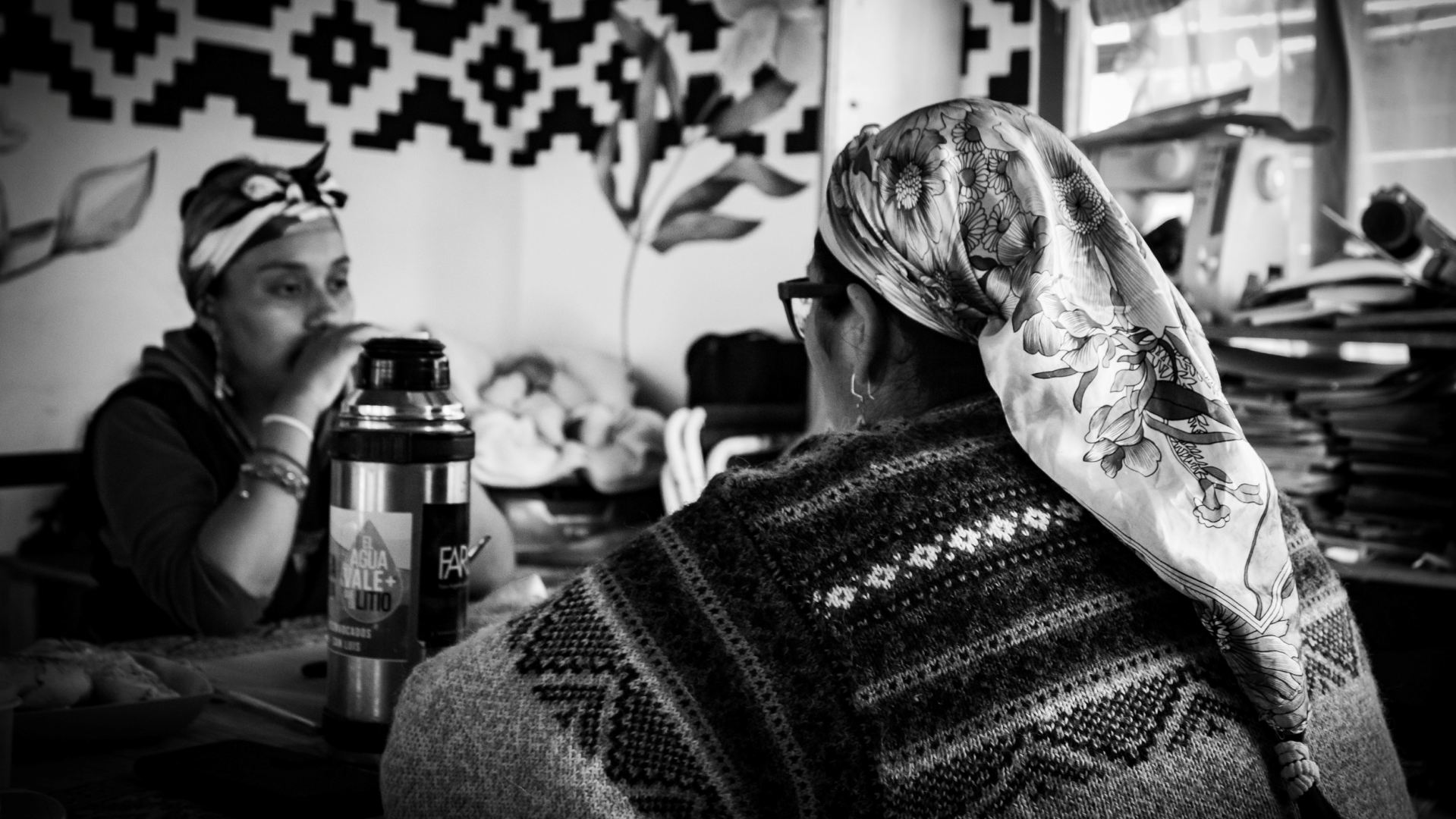 The recovery of the lands in 2017 and the formation of the Lof Lafken Winkul Mapu; the beginning of the cause of National Parks and the operations of the then minister, Patricia Bullrich; the assassination of Rafael Nahuel by the Prefecture; the coordinated campaign of media stigmatization; the hate crime against Elías Garay; eviction threats; the humiliations; false flag attacks; the dozens of open cases… a whole extensive and systematic path of police, judicial and political persecution that had its most recent episode on October 4, 2022, when the Unified Security Command -formed months ago by the national government- entered the Mapuche territory in Villa Mascardi and evicted the community that had been living there for five years.

Without intending to delve into this operation -which has been well reported by the victims through fellow media-, it is essential to tell how the lives of the victims continue. four women and the ten children who are still in preventive and home detention at the Mapuche Center in Bariloche.
Because these are people who saw their life in the mountains interrupted abruptly and now have to adjust to another environment, other ties, another spirituality, far from home.

The Lof Lafken Winkul Mapu It had been installed in Villa Mascardi for more than five years, in a portion of territory that it disputes with National Parks, whom it accuses of doing business with the land. In fact, most of the parcels that the Lof adjoins belong to private individuals, except for a portion belonging to the Bishopric of San Isidro.

From 2017 to this part, the community began to work with animals, had an orchard and medicinal herbs, and had built a dozen wooden houses (rukas) where about 30 people lived, including boys and girls who had spent their entire lives there.
During the eviction, they lost their houses and their belongings, since, until now, they have not been allowed to return and the territory is extremely guarded by federal forces.

“They destroyed everything we had built with a lot of effort over the years, but we don’t care about the material or the economic. We do not see it as a business for tourism, as National Parks see it. We can start again from scratch and lift everything. But we have to go back. What gives us encouragement is the territory. The day to day on that mountain charged us with energy”, says the machi Betiana Colhuan Nahuelfrom the other side of the table where we shared some fried cakes with bitter mate.

The place where they are now housed – imprisoned – is a square, two-story cement structure, where Betiana Colhuan Nahuel, Luciana Jaramillo, Romina Rosas and Celeste Ardaiz Guenumil live together, along with a dozen boys and girls ranging from just a few months of life to, perhaps, about 9 or 10 years. They are all community raised. The teenagers from the community are not here. They tell me that they still had the latent memory of the 2017 repression in which he died Rafael Nahuelso they fled up the mountain as soon as they heard that the repression of the security forces was unleashed.

“We have no other option in life than to return to the territory. Our children were born there, they have their placentas there and their roots there. You can’t take them out of there and take them to another place to continue with their lives. It’s like taking a plant out of its natural environment. They will not grow as they would in their native place. We aspire to return, for our health, for that of our children. We have everything there: our well-being as a people, our physical and spiritual health“, firmly holds the machiwhile nursing her baby barely above her traditional clothing and silverware.

The machi They are the maximum spiritual authorities of the Mapuche people, who “come to this world to heal with natural wisdom”, both Mapuche and non-Mapuche people. After 50 years, Betiana Colhuan Nahuel is the first machi on this side of the border, in the Puel Mapuand is recognized as a spiritual reference on both sides of the mountain range.

In Lof Lafken Winkul Mapu (Villa Mascardi), there is also the only rewe that is standing in the country and it is a place where the machi
Contact your spiritual energies, renew your strength and wisdom, neutralizing spiritual energies that cause illnesses and ills.

Perhaps it is difficult to understand from a Western worldview, but from Mapuche philosophy, the reasons why a machi have to be with him rewe. “It is not an altar that is visited from time to time. Is a newena force that is linked to the machi who develops his work there and that rewe The people who are in treatment and the communities that were linked are also linked. Everything rewe
It is a living being that must be cared for, accompanied and fed. They care about our health, but we say that the health that is first in danger is that of the rewethe mapu and the kujfikecheyem. For this reason, we are also all in danger.”expressed the women detained in the last Autonomous Parliament convened by different Mapuche-Tehuelche ancestral authorities that took place at the end of November.

The arrest and eviction of the machi Betiana Colhuan Nahuel has a similar precedent in Chile, where many pu machi have been separated from their pu reweas is the case of the machi Celestino Córdova, the machi Francisca Linconao and the machi Millaray Huichailaf, who have also publicly stated the urgency to return to their territories and thus avoid the serious consequences that a weakened rewe has for the Mapuche people.

Luciana Jaramillo is another of the detained Mapuche. Before starting to chat, she asks me if I’m going to be able to edit the audio from the recorder later and I clarify that it’s only for the note, that it’s not going to appear anywhere. She looks more comfortable now. She says that they are just learning how to give interviews, which, until a few months ago, they had never had to do. Even so, she begins bluntly:
“All this persecution, all this harassment and criminalization is because we are Mapuche. What happened to our grandparents is repeated again. It is clearly a lesson, a punishment. They seek to discipline, not only our community, but the entire Mapuche people“.

“Our people pre-exist the State. We return to the place where, at some point, our grandparents were taken. By inheritance it corresponds to us.
We are not usurpers, how are we going to usurp our own land, how are we going to buy our own land (…) The solution to this conflict is for them to recognize their own laws and stop persecuting us”, says Jaramillo, referring to international laws and the own National Constitution (Art 75. subsection 17) that recognizes the rights and pre-existence of the original peoples in the national territory.

The building in which the house arrest takes place is located in the extreme northwest of the city of Bariloche, on a hill full of yellow broom. On one of its side walls, there are illustrations of Mapuche symbology that make it possible to recognize the house almost from the coastal road. As neighbors, they have the Criminal Police Detachment, in which, every day, a military formation raises the Argentine flag.

Luciana also recounts that government authorities offered them housing in the city of Bariloche and money so that they could support themselves for six months, a proposal that they immediately rejected.

“They want the Mapuche like this, in the middle of the city, impoverished, being their cheap labor, building their house; being their servant, taking care of their children and washing their clothes. This is how the winka (white man) wants us, submissive. They don’t agree that we have an autonomous path, because they want us to be kissing their feet. We are no longer in that, we want to be a dignified people and we seek dignity in our territory, if the mountains give us everything we need, we do not need anything from the city being there. We know how to sow, we know how to weave, raise animals… and we are building our spirituality, which is the most important thing”, explains the young woman.

The machi Betiana maintains something similar: “We wanted to have a life more typical of the Mapuche people. And we give the message of encouragement that it can be achieved. For this reason, I believe that the State is afraid of us. In the city, we feel stripped, not part. That is our recent heritage. Our fathers and mothers have been cheap labor, illiterate, not fitting into society. It is part of the oppression that conquered and enslaved the Mapuche people. We are still this, in other ways, but we were still their slaves. For this reason, we decided not to live on our knees anymore, to get up and that has consequences that we must assume.“.

The Mapuche people have, as a collective, the right to health and spirituality. And for his worldview, these two pillars of life are not guaranteed if the machi does not return to her rewe.

Added to this, there is childhoods who are being deprived of their right to grow in full exercise of their cultural and religious identity.
Since the eviction occurred, some of the children are suffering physical and emotional imbalances from being off their land, as evidenced by lack of speech or exhibiting a state of over-excitement. “The younger ones tell us: ‘Why are we here? Let’s go for the ruka’. All they want is to go back there, to their place. We had been living there for five years, they don’t know anything else”, says Luciana.

Meanwhile, Betiana complements: “We try to transmit the Mapuche culture, not on a blackboard or as a school teaching, but from day to day upbringing, with the customs in the territory. That they see it as a way of life, more typical of our people. Today, they feel very bereft and repressed, because a lot of that upbringing was cut off.. But they understand what happened and what happened to them for being Mapuche, for living in the territory”.

On January 12, a dialogue table will be held between the president Alberto Fernández and representatives of Mapuche communities
of Río Negro, Chubut and Neuquén, to address the persecution of the communities in general, and the problem of Villa Mascardi in particular.

Asked what the solution to the conflict would be, Betiana and Luciana responded: “The decision is political. The conflict that they themselves have generated with us is resolved with a signature from the president, where he says that he cedes that territory to us, where we already had a life and that, by right, corresponds to us “.

“They want the Mapuche submissive and impoverished; They don’t agree that we have an autonomous path – Rebellion

How to be more spiritual this 2023
#87 | Open, Relational, and Process Theology (Take 2) with Misa Perez and Nader Manasrah
Let's live the living nativity scenes of Calabria, feeding the bonfire of cohesion and faith…
Tweet
Share
Share
Pin