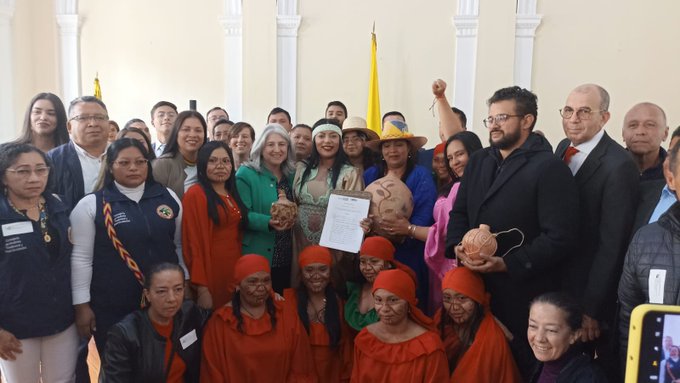 Tweet
Share
Share
Pin
The reasons that led to this proposal lie in the importance of the river for the inhabitants of the department, having a direct relationship with at least 22.53% of the population, which translates to approximately 228,000 people.


The senator for the Historical Pact, Marta Peralta Epieyú, filed this Wednesday before the Congress of the Republic a bill to declare the Ranchería River as a subject of rights.

The purpose of the project is to declare the river, its basin and its tributaries as an entity subject to rights to “protection, conservation, maintenance and restoration by the State and the ethnic and indigenous communities that live in the department of La Guajira”.

This project promoted by the indigenous senator aims to recover the water of La Guajira and that this natural resource be directly for the children who die of thirst there and not for the coal that is extracted by El Cerrejón.

“The Cerrejón company has diverted more than eight streams in La Guajira, including Bruno and Aguas Blancas. Really, what we are looking for is that the most important river sources that the Department has have protection by the State and the communities to guarantee water for our children but also for our future generations”, explained the senator before several local media.

The reasons that led to this proposal lie in the importance of the river for the inhabitants of the department, having a direct relationship with at least 22.53% of the population, which translates to approximately 228,000 people.

“Not only is it the main river current of the Wayúu ancestral territory, and therefore for the communities and indigenous people that bear the same name, but it is also the only permanent current, since the streams found in the Alta Guajira , despite the fact that they are mighty, they only carry water in winter”, says the document presented.

You may be interested: Canadian citizen who had been kidnapped in La Guajira was rescued by the Gaula

The Alternative Indigenous and Social Movement (MAIS), of which Marta Peralta Epieyú is president, shared a message after the presentation of the bill. “The bill that seeks to declare the Ranchería River as a subject of law is successfully filed, to guarantee life in La Guajira. We celebrate this action of our president and senator”, says the trill of the movement. 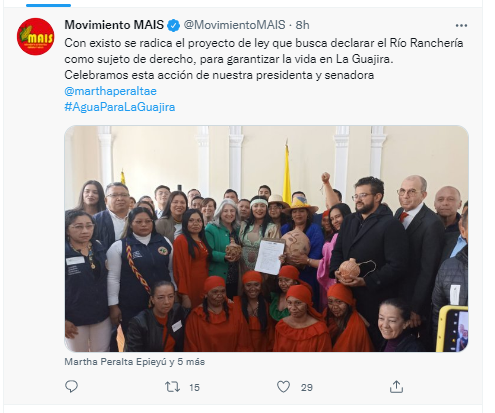 Additionally, the senator of the Republic highlighted the threats that the river crosses and assured that the extraction and exploration of coal are a determining factor in the territory that has been seriously affected in its fundamental values, access to natural resources and practice of their spirituality through mining.

“This is how the productive sources that develop in the river basin have had a direct impact on the disappearance of entire towns, the lack of water, the displacement, the resettlements and the health problems of the population”, argues the bill.

The senator and president of the Fifth Commission, Inti Asprilla, was the one who made the presentation on this project, among the attendees were the president of the Senate, Roy Barreras, and the Minister of Housing, City and Territory, Catalina Velasco.

This bill is presented one day after the Ombudsman’s Office reported that the number of deaths from malnutrition in La Guajira will increase 92% compared to 2021. To date, 48 deaths of indigenous children have been recorded in this area of ​​the country. country.

According to the entity, 24% of reported deaths from causes associated with malnutrition in children between 0 and 5 years of age in Colombia are registered in this department.

Iván Duque acknowledged that his “great frustration” as president of Colombia was not having seen the dictatorship of Nicolás Maduro fall
Iván Velásquez on total peace: “It is not a naive proposal from the Government”
In Congress, the error in the text of the tax reform would be corrected and that would affect the price of meat