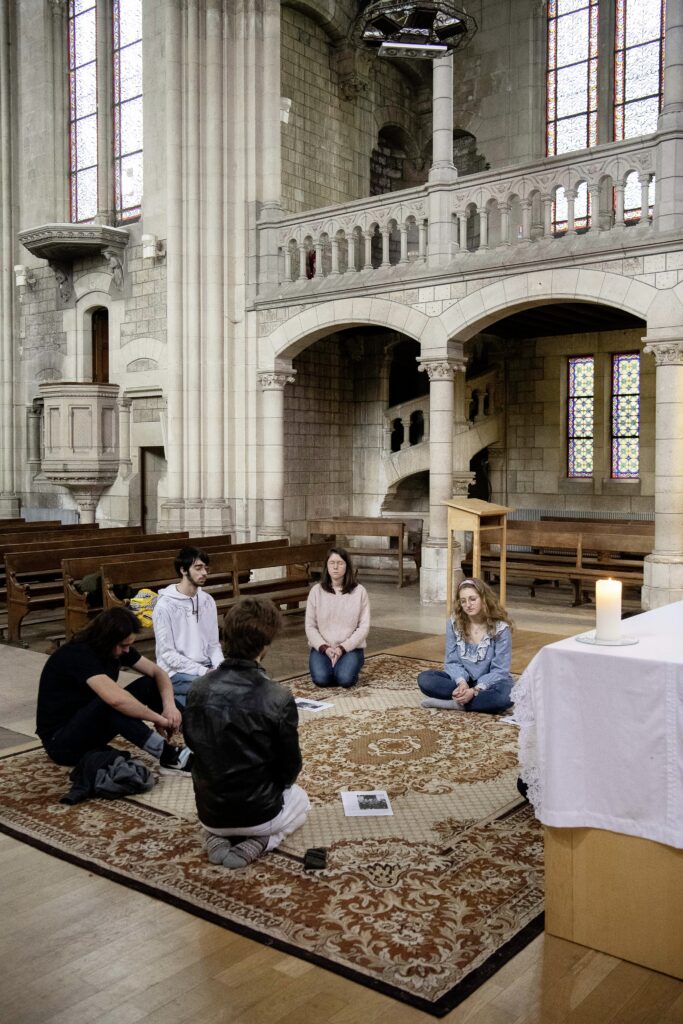 Lhe courtyard of the Saint-Philippe establishment in Meudon (Hauts-de-Seine) is surprisingly calm. On a corner of asphalt, under the basketball hoop, four teenagers engage in an unusual activity: stay a minute without speaking while looking at each other eye to eye. Preceded by a few birdsongs, Zinedine breaks the silence. “It’s embarrassing,” he chuckles. Despite the seriousness with which everyone submitted to the exercise, Louis, Adrien and Diego acquiesce. These students from the school complex of the Apprentis d’Auteuil foundation are taking part this Wednesday afternoon in a Ziléos club. The association was created in 2012 by Béatrice and Patrick François, two lay people who went through the Fondacio community, engaged in the transmission of the faith. Ziléos aims to provide a “ministry of presence” to young people who are asking questions about God. But not only…

Seven “clubs” like that of Saint-Philippe de Meudon have thus flourished in France. The movement is also established in Canada, Romania, Switzerland and is taking its first steps in Lebanon. All were born under the impetus of a volunteer, a proposal within a parish, a meeting… In Meudon, it was the association itself that suggested experimenting with a Ziléos club. “Our DNA is inseparable from the social doctrine of the Church. Here, different religions coexist, especially Islam,” explains Thierry Campos, the director. Julien Lambert, 38, a former Jesuit, is recruited as a pastoral guide in the school and responsible for the Ziléos clubs. Every other Wednesday, the employee – whose position was funded by private donations – brings together a few young people to talk about a topic and pray. “Our goal: to walk with young people to create a bond of trust and offer them open exchanges that respect each other’s beliefs. Each young person constructs himself through his own spiritual reflection”, emphasizes the facilitator, who does not hide the difficulties encountered by some. “They are fragile, come from different sectors, college, CAP… The true ecumenism of the club is there! smiles Julien.

Whatever the club, the formula is based on three highlights: an activity (sports, artistic, fun, etc.) followed by a meeting with a speaker, before a time of prayer or meditation. “The presence of a witness, different each time, is essential, insists Elisabeth Terrien, member of the pastoral council of Ziléos. A young person needs various words to build himself. ” In Meudon, the students welcomed a former prisoner, a rapper, an ecologist Jesuit… “It’s as if we were using a kaleidoscope: we take a theme and look at it from different angles: the testimony, then the reading of a Bible text related to this experience. »

Talk about your dreams for the future

Around the coffee table invaded by goblets of tea and dried fruit, the teenagers wonder about the job of their dreams. Diego, in second, is determined: “I need to make myself useful, I want to join the French Navy. ” Adrien, 16 years old, did not stop his choice. “But I want a job that makes me happy! The eyes are riveted on Stéphanie Talevis, in her early thirties, who recounts her professional retraining from a job in a bank to a position in a start-up specializing in waste recycling.

Among the heterogeneous circle, Blanche Malaise-Lareigne, in charge of the movement’s communication, is enthusiastic: “Young people learn to express their emotions, it doesn’t seem like much but it’s not so obvious. Each club must find a balance because the participants change. But each time we experience a moment of grace that touches me deeply. The Ziléos missionary initiative involves “many work”, she continues. The afternoon ends in the priory, close to the greenhouses and fields intended for horticultural training or “green trades”. In addition to seeds from the vegetable garden, those of spirituality are meticulously cultivated here.

Before opening a club, the future animator undergoes initial training. Each month, a point is made on the activity of the club with a manager and educational sheets are also made available.

Every young person is free to come to the club. Adaptation and openness are at the heart of the pedagogy of movement.

In addition to the clubs, Ziléos – recognized by the Church of France – also offers summer camps or a course “Deepening the Christian faith”.