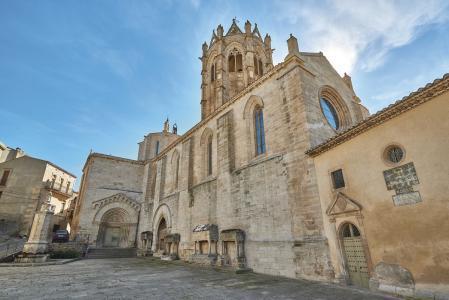 The wisdom of the monks resides in contemplating life from a deep spirituality. See the world through the prism of compassion, beyond a certain creed. Admire the simple austerity and live in communion with other human beings and the environment that surrounds us.

The wise Thomas Merton, one of the writing monks of the mid-twentieth century, said that “the monk is by definition someone who lives withdrawn in solitude and silence, far from the noise and confusion of active mundane existence… Thus inner freedom springs forth. or the release of trivial worries that arise from the overstimulation of appetites and imagination.

In a world based on having more than being, it is good to return to the fertile void of contemplation.

In a world based on having more than being, where we all run after possessions, stimuli or gratifying or virtual experiences, it is good to return to the fertile void of contemplation. Stop to be able to see and understand.

Hugh Feiss, an American Benedictine monk, translator and author of various studies on the monastic tradition, collects in monastic wisdom a compendium of the knowledge of monks and nuns of all ages. From Pacomio, a monastic leader in the 4th century, to Esther de Waal or the aforementioned Merton in the 20th century, passing through the medieval Anselm of Canterbury or Hugo de Cluny, among others.

The book succeeds in collecting all the voices in an exercise of integration and order from chapters that deal with obedience, silence, prayer, work or topics that would seem less monastic such as desire and longing. Segments dedicated to peace stand out where we understand that Benedictinism is nothing more than a call to calm a universe plagued with violence, through a peaceful voice that rises among a world that thinks that everything is achieved by force, as proposed by Sor Joan Chittister.

Rather than hate and cultivate enmity, we must end the day making peace with whoever we have quarreled with. Avoiding jealousy and envy, banishing discord, are some of the keys to achieving that path of peace that other traditions such as the Buddhist or Jain call ahimsa .

In another section of the book, monastic life is even considered a countercultural movement, not because the monks are against the established culture, but because they maintain their own values ​​and virtues with complete independence. Certainly, there is a gap between the monastic way of life and the daily life of those who do not practice this path. However, this does not prevent us as readers, devotees or meditation practitioners from delving into the benefits of contemplation, silence, full emptiness and the experience of being devoid of ambitions.

Feiss introduces the themes with synthetic brilliance, allowing the voices of various monastic sages to close the chapters. Reading leads to reflection and to that magical dimension of ancient knowledge overlapping with the most rabid news.

Whoever has unlimited needs is never satisfied. Greed is insatiable, reminds us of the Synclética nun. Esther de Waal, in A path that gives life He says: “If I accept that I am someone ordinary, weak, fragile, in other words, completely human and dependent on God, I get rid of the idea of ​​being in a certain sense someone apart, different or superior. It is then that the authentic and real self can begin to emerge.

It is good that spirituality returns with books like this one, reaffirming a dimension that one day we left behind.

Sometimes, it is necessary to separate or cloister oneself from the world to maintain the essences of the deepest knowledge, but sooner or later, this must be integrated into a troubled world that requires lessons from mysticism.

It is good that spirituality returns with books like this one, reaffirming a dimension that one day we left behind. The contemplative life holds much wisdom and possible solutions for this hectic 21st century.

The wisdom of monks and nuns

Yoga and Spirituality: a daily practice with Yogafirejo
A method to overcome money
The association of the Silvestrini brothers meets in Catanzaro, a meeting of prayer and friendship
Tweet
Share
Share
Pin