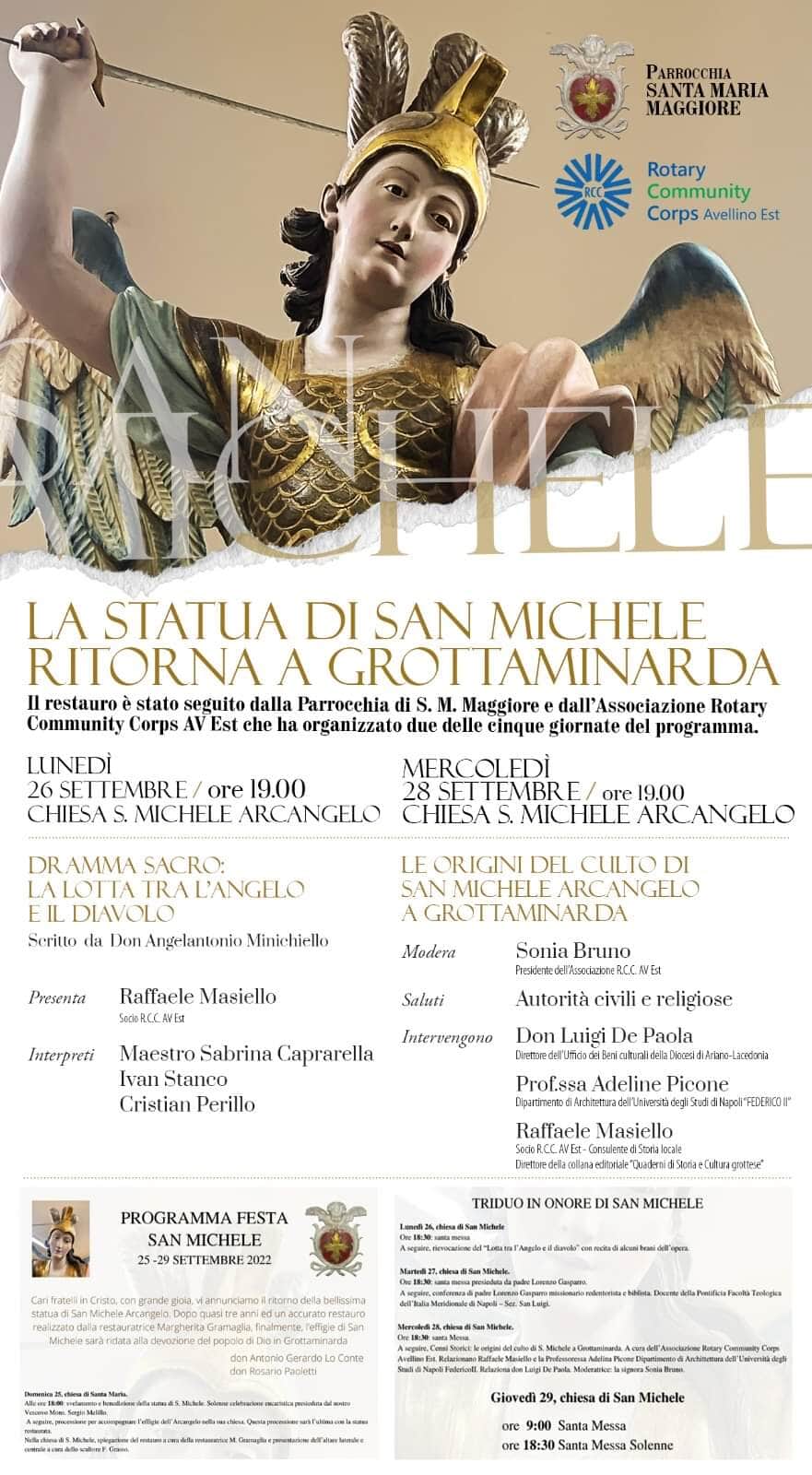 
On Sunday 25 September 2022, after a three-year restoration, the statue of St. Michael the Archangel will be returned to the community of Grottaminarda. The restoration, followed by the Parish of Santa Maria Maggiore, in the person of Don Rosario Paoletti, and by the Rotary Community Corps Avellino Est, chaired by Sonia Bruno, allowed a sculpture from the second half of the eighteenth century to be restored to its former glory.

The celebrations for the return, coinciding with the feast of the Archangel, were organized by the Parish of Santa Maria Maggiore in synergy with the RCC AV Est and will include five days of events, between sacred and civil.

Specifically, on Sunday 25 September, after the Eucharistic celebration presided over by the Bishop of Ariano Irpino – Lacedonia, Sergio Melillo, there will be the delivery of the Statue to the Grotesque community and the reopening of the Church of San Michele, after some restoration work on the structure. On that occasion, the restorer Margherita Gramaglia will describe the interventions carried out, while the sculptor Flavio Grasso will talk about the new base, created ad hoc for the statue, and the new panel placed to decorate the main altar of the Church of San Michele. The bishop of Ariano Irpino – Lacedonia, and the parish priest Don Rosario Paoletti will also participate.

Monday evening, September 26, 2022, after the religious celebrations, under the auspices of the RCC Av Est, the sacred drama “The struggle of the angel and the devil” by the priest Don Angelantonio Minichiello, composed in the mid-nineteenth century and represented in Grottaminarda until the early 1930s. The presentation of the drama will be by the historical popularizer and RCC Av Est member, Raffaele Masielo, who found the text, considered lost. The text was interpreted by master Sabrina Caprarella and her collaborators Ivan Stanco and Cristian Perillo of the Polyphonic Choir of Santa Maria Maggiore in Grottaminarda.

On Tuesday 27 September after the Eucharistic celebrations there will be the intervention of Father Lorenzo Gasparro who will speak about the Angels mentioned and remembered in the Bible.

Wednesday 28 September, after the celebrations there will be a meeting, organized by the RCC Av Est, dedicated to the worship and devotion of San Michele in Grottaminarda. Speakers: the director of the Cultural Heritage Office of the Diocese of Ariano Irpino – Lacedonia, Don Luigi De Paola, professor Adelina Picone, of the Department of Architecture of the University of Naples Federico II, and the local history consultant and RCC member Av Est Raffaele Masiello who will talk about the origin of the cult of San Michele Arcangelo in Grottaminarda. Moderator of the meeting will be Sonia Bruno, president of the RCC Av Est.

Thursday 29 September 2022, the feast of St. Michael the Archangel, all events will be marked by faith and devotion to the Archangel.

All events and manifestations will be held in the Church of San Michele, the oldest testimony of Grotesque spirituality.

The statue of San Michele returns to its former glory, the celebrations in Grottaminarda