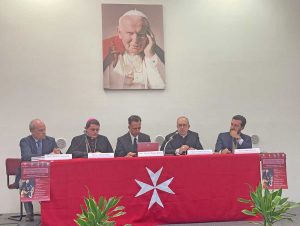 Civitavecchia – We receive and publish – On Friday 18 November 2022, a conference on “The service of charity in the church and in the order of Malta” was held in the cathedral of Civitavecchia, organized by the Viterbo – Rieti delegation of the sovereign military order of Malta and coordinated by dr. Alessio Bruno Bedini.

Among the personalities who greeted: the hospitaller of the grand priory of the order of Malta, Carlo Vitalini Sacconi, also in the name of the grand prior Balì Fra’ John Critien, the delegate for Viterbo-Rieti, Roberto Saccarello, the mayor of Civitavecchia, Ernesto Tedesco, the director of Caritas, Enzo Ferraccioli and the head of the Order of Malta’s center in Civitavecchia, dr. FabioUzzo.

Among the speakers, HE Msgr. Gianrico Ruzza, bishop of Civitavecchia – Tarquinia, who spoke on “The Service of Charity in the Church today”, underlining how the charity that the church offers includes all aspects of human life; therefore, people’s lives, with their wounds and their beauties, must be listened to in a profound and attentive way. Only in this way will believers be the protagonists of an authentic cultural revolution, whereby charity will become a diffusive and pervasive love.

The president of the Civitavecchia History Society, Enrico Ciancarini, then gave a report on “Charity in Civitavecchia in the past” offering the participants various interesting insights into how religious orders, confraternities and other ecclesial institutions operated. Filippo Orsini, delegate for Umbria of the order of Malta, then reported on “Charitable assistance in the past”, ranging over a wider territorial area and pointing out how even the concept of poverty has profoundly changed between the Middle Ages, the Renaissance and the contemporary age.

The conference was concluded by HE Msgr. Andrea Ripa, titular bishop of Cerveteri, secretary of the supreme tribunal of the apostolic signature and head chaplain of the grand priory of Rome, speaking on “Charity as obsequium in the Melitense charism”, outlining three essential elements of charity as obsequium pauperum within spirituality and of the life of the order of Malta: the first is represented by the mission originating from faith and which concerns all the members of the order; the second, as a common mission, then requires to be lived in the form of hospitality, through which the assisted is welcomed in a relationship of evangelical equality and equal dignity, as well as of “compassion”, that is, of “feeling together”; Finally, the third aspect of charity understood as obsequium is to live it and practice it free from any spontaneity or proselytism. Charity should be considered as an act evangelically due to the poor, because it is due to Christ, present in the “Guiled Gentlemen”.

Viterbo – Rieti delegation of the Sovereign Military Order of Malta

“The service of charity in the church and in the order of Malta”, a conference in Civitavecchia to talk about it – Tusciaweb.eu