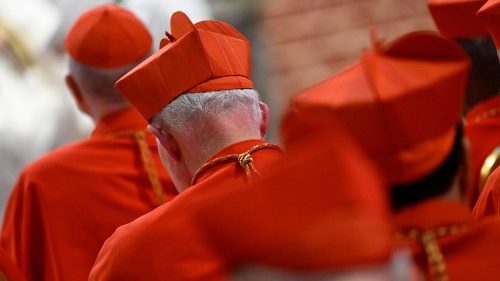 Today begins the third session of the meeting in the New Hall of the Synod of Cardinals of the world with Francis to reflect on the Praedicate Evangelium. Yesterday, groups divided by language reflected on the role of the laity at the head of the dicasteries. This afternoon, the Pontiff’s mass in San Pedro.

The training of personnel, the spirituality of the Curia and, above all, the question of the laity and their possible role at the head of some Dicasteries were the themes on which the reflections and discussions of the Cardinals turned during the closed-door meeting. with the Pope on the Praedicate Evangelium. The meeting comes to an end with the last session this morning and, in the afternoon, at 5:30 p.m., the Mass celebrated by Francis in Saint Peter’s Basilica.

Today, August 29 and tomorrow, August 30, the meeting behind closed doors in the Aula Nuova of the Synod to delve into aspects of the Praedicate Evangelium, the Apostolic Constitution in …

Yesterday, after the Pope’s greeting at the beginning of the work, followed by a brief speech by the dean of the College of Cardinals, Cardinal Giovanni Battista Re, the nearly 200 cardinals, patriarchs and superiors of the Secretariat of State gathered in the New Hall of the Synod were able to meet in language groups, during which proposals were made, ideas were presented and clarifications were sought. A plenary session was also held.

The Pope during the meeting with the cardinals

The theme of the laity

The main theme, as already mentioned, was that of lay people in leadership roles. As will be recalled, point 10 of the Praedicate Evangelium – document published on March 19 and in force since June 5 – says: “Every Christian, by virtue of baptism, is a missionary-disciple to the extent that he has found the love of God in Christ Jesus. This cannot be overlooked in the updating of the Curia, whose reform, therefore, must include the participation of the laity, also in functions of government and responsibility”.

The Press Office of the Holy See organized, this Monday, March 21, a presentation conference of the Apostolic Constitution Praedicate Evangelium on the Roman Curia and its …

Already during the press conference to present the Constitution, on March 21, some speakers, including the newly appointed Cardinal Gianfranco Ghirlanda, had addressed the issue stressing that “there are Dicasteries in which it is convenient to have lay people at the head.” An example is the Dicastery for the Laity, Family and Life, which, according to the canonist, covers areas that lay people “live” and in which they “have experience”. “There is no set estoppel,” Ghirlanda said. At the same time, he added, in the case of the Courts, “the Constitution does not repeal the Code of Canon Law, which stipulates that in matters that concern clerics, they are the ones who judge… The Church continues to have a hierarchy. It does not it eliminates the function of a priest or a bishop, it depends on the different situations’.

On the question, which arose during the work, more studies were requested in an atmosphere of serene confrontation.

The Pope greets some cardinals, on the sidelines of the works

Cardinal Paolo Lojudice, Archbishop of Siena, also explained it to Vatican News. “When you work in small groups, it is easier to confront each other and dialogue. The issue, as we know, is open and serene confrontation about the new Constitution and, in particular, about its application, about how to put it into practice. In groups, more than new elements, some ideas have been aligned… It is possible that there are some passages that help to understand some elements that are less clear, less evident, in particular the one that refers to the presence of the laity even in the most departments. It is an open door that we hope can be crossed in the best possible way”.

Lojudice speaks of an “excellent climate” inside the New Synod Hall and describes the meeting as a starting point: “Times are necessarily long to carry out a reform. The Pope cares and has cared from the beginning, it is one of the the axes of the pontificate… I think that sooner or later we will reach a different consciousness, where everything is mission and missionality, even, it may seem paradoxical, the Curia’s own offices”.

The Cardinal Archbishop of New York, Timothy Dolan, speaks of a “beautiful experience” and an “extraordinarily uplifting” encounter. “We speak as friends, as brothers, with immense charity and deep love for the Church, on very practical matters,” the cardinal said into Deborah Castellano Lubov’s microphone. “I’m glad it happened. It was eagerly awaited.”

a moment of prayer

The Pope and the Cardinals: The issue of the laity is central – Vatican News