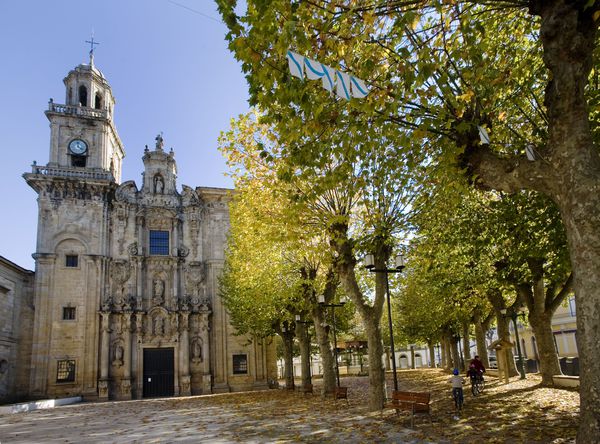 We start from an unquestionable reason —among many others that exist— why the Camino del Norte is very special, and that is that, in 2015, it was declared a World Heritage Site. This recognition by UNESCO is a clear indicator that if what you want is to live the experience of the Camino de Santiago on one of the routes that offers the most intangible wealth, this is an excellent option. Another important reason to note is that preserves the ancestral essence of the Way, as it is in the passage through beautiful lonely landscapes.

If we were to describe the history of It would be essential to say that this Jacobean route is as old as the thousand-year-old Camino Frances, also, or subsequently, that it reached relevance in the Late Middle Ages and, of course, that it has been a route linked to illustrious pilgrims such as, for example, Saint Francis of Assisi, who, according to tradition, made a pilgrimage to Santiago in the year 1214 This Way maintained its popularity until the 18th century, a century in which it lost prominence, although currently and due to the rise of the routes to Compostela, as well as the wonderful experience it offers, it is once again very popular with pilgrims.

This Way enters Galicia through the Ría de Ribadeo, and it is in Ribadeo where it has its Galician starting point, from which it is 189 kilometers to the Cathedral of Santiago. In this article we will detail the seven recommended stages to reach Arzúa, where it joins the Camino Frances. Once in Arzúa, the pilgrims of both routes continue together to Santiago in two stages: Arzúa-O Pedrouzo and O Pedrouzo-Santiago, which we already indicated in our article on the French Way.

From Ribadeo to Gondan (21 km)

We left the Plaza de España to enter the forests and Galician nature. We will cross the towns of Vilela, A Ponte de Orante, Vilamartín Pequeno and Vilamartín Grande; shortly after we will arrive at our destination for today, Gondan. The journey continues to Mondoñedo in a 16-kilometer stage, which allows you to enjoy all that it offers, such as the wonderful Natural and Cultural Heritage in Lourenzá, the Chapel of the Virgin of Guadalupe and a very peculiar granary in Ogrobe. There are also picturesque villages such as San Pedro da Torre, O Reguengo and San Paio and, of course, the impressive Mondoñedo Cathedral.

The trip continues from Mondoñedo to Abadín on a 17 km route in which we will pass through the town of Lousada and through charming towns such as Maariz and Capilla de San Vicente de Trigás. It is in this section where we entered the famous Terra Chá, known as the Galician plateau, which leads us to Gontán, and from there, to Abadín.

We continue from Abadín to Vilalba in a 21 km section that is characterized by the gift of natural beauty of the province of Lugo. We will cross the Anllo river, and on our way we will meet the population of As Paredes. From here, for corridors and crossing the river Arnela, we arrive at O ​​Barral and Martiñán. We leave Martiñán via a historic 17th century bridge, the Ponte Vella, which crosses the Batán River, later arriving at O ​​Campo do Cristo. The entrance to Vilalba will be to the Plaza de Santa María, where the Parish Church and the famous medieval tower of the Andrade family are located, today a tourist hostel.

We continue to enjoy the comfort of the Terra Chá plain in the section that joins Vilalba and Baamonde (19 km). We will cross the villages of Gabín and Boizán, and some nuclei of a few houses, something typical of Galicia. Pedrouzos will be our next town, and then we will go to the medieval bridge A Ponte de Saa and go through different villages, such as Lamela, As Penas, Casasnovas, until we reach Baamonde.

The longest stage of the Camino del Norte by Galician land is the one that joins Baamonde and Sobrado dos Monxes (40 km), but for those who consider that it is too much effort, they can divide it and spend the night in one of the towns that we will pass. It must also be said that in these kilometers we will climb to the highest point of this Camino, located above 700 meters. We will pass through beautiful villages, such as Carballedo, Seixón, A Lagoa, Miraz, A Braña, A Cabana and A Marcela, among others. We will also come across many villages, without forgetting the protected natural area of ​​Laguna de Sobrado, an artificial reservoir built in the 16th century. The truth is that these 40 km have many attractions waiting to be discovered by the pilgrim.

At the end of the Arzúa stage, the Camino de Norte “ends”, that is, this is the last route that the pilgrims of this Camino make exclusively, since in Arzúa it joins the Camino Frances. Perhaps for this very reason, This is a very emotional stage. We will pass through Vilarchao, O Castro, Sendelle —with its 12th century Romanesque church—, Piñeiro, Vilar and Casaldoeiro, among other towns, to finally reach Arzúa.

To conclude, and returning to the compelling reasons that make this Way a wise choice, we want to make the point that at the starting point of this Jacobean route, that is, in Ribadeo, there is one of the most famous places from Galicia, As Catedrais Beach, a natural monument of impressive dimensions created by the power of the Cantabrian Sea together with the patience of time —its rocks originated more than 500 million years ago—; the result is a true work of art. Declared a National Monument by the Xunta de Galicia, its name is actually Playa de Aguas Santas, but the imposing shape of its cliffs where they meet the sea is reminiscent of a superb cathedral, which is why it is known by the aforementioned nickname. It is true that if you start the Camino del Norte in Ribadeo you will not pass through this emblematic place, but it is also true that it is only a few kilometers from the aforementioned Plaza de España from which we start, so do not hesitate, pilgrim, choose this Way, visit As Catedrais Beach and enjoy everything that we have mentioned in this article. Good way!

More information in the official web The road to Santiago.

The Northern Way, spirituality between the sea and the mountains