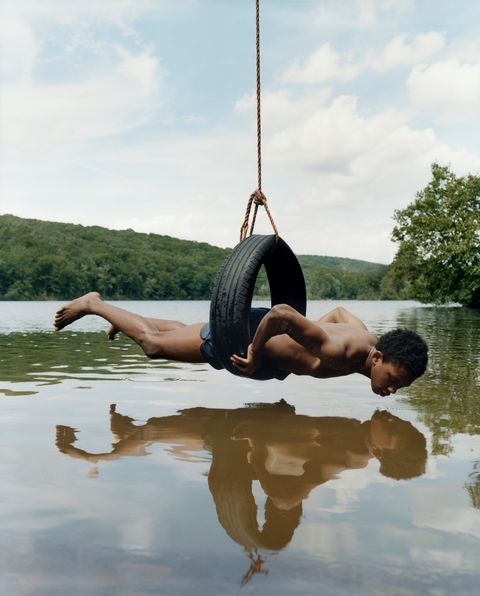 Born in 1995 in Atlanta, Georgia, Tyler Mitchell says he grew up in a provincial reality, going to school in a predominantly white neighborhood, where racial issues were by no means defeated. What binds it to this land is also its verdant scenery: forests, uncontaminated lakes, long walks on humid land. And right here, during his adolescence, he begins to photograph. The subjects are mainly young black boys, immortalized in natural landscapes but staged and theatrical setsso as to explore the psychological relationship between this youth and the outside world, especially that of the southern United States.

His photographs immediately attract the attention of the public, especially when he moves to New York, where he begins to study Film and Television at the NYU Tisch School of the Arts. Teachers, experts and critics begin to notice her photographs, and to appreciate them. And that’s exactly how Mitchell made history in 2018 as the first black photographer to make a cover of Vogue America for Beyoncé’s appearance in the September issue; the following year, a portrait of this series was acquired by Smithsonian National Portrait Gallery for its permanent collection. From there everything is really growing, so much so that he was chosen – among his many successes – to photograph Miuccia Prada on the occasion of an interview on Harper’s Bazaar US for the thirtieth anniversary of the foundation of Miu Miu.

“My photography is very collaborative,” says Mitchell. “I’m almost like a director. I have an idea and I write some kind of script.” The images of him actually tell a story, the story of black beauty and at the same time the desire to represent this beauty without having to distinguish what color it is and where it comes from, without having to say that it belongs to a group of people other than a standard. He photographs, and if his subjects are often black people it does not mean making political or social art: it means photographing the human world in its various splendor.

The generation to which Mitchell belongs was born in a social context still stained with veiled or sometimes violent phenomena of racism, but it is also the result of the era of globalization, of digital natives, of the possibility of free expression and global connection with all the cultural and political fringes of the globe. The language of this youth is jagged, fluid, free, which heats up like a fire by the lake: it gives warmth and candor to all the children of this land.

A solo exhibition by Tyler Mitchell is underway until November 12, 2022, entitled Chrysalis at the London office of Gagosian. Black girls and boys are immortalized in an often theatrical and surreal nature, in which elements of spirituality, transformation and aspiration do not take long to arrive. Large photographs side by side with smaller ones represent subjects such as fauns or gods locus amoenus ancient, in which to be free to communicate with each other and with the natural landscape, to feel part of the world in all its aspects, to give space to the beauty that one possesses in a unique way without feeling burdened under the weight of social expectations.

Tyler Mitchell has been a visiting artist and lecturer at numerous institutions including Yale University, Harvard University, NYU, Paris Photo and The International Center of Photography. He is represented by the Jack Shainman Gallery. His photographs belong to the collections of Foam Fotografiemuseum, Amsterdam; National Portrait Gallery, Washington, DC; Hessel Museum of Art, Bard College, Annandale-on-Hudson, NY; Columbus Museum of Art, OH; and the Los Angeles County Museum of Art.

The new exhibition by photographer Tyler Mitchell from Gagosian