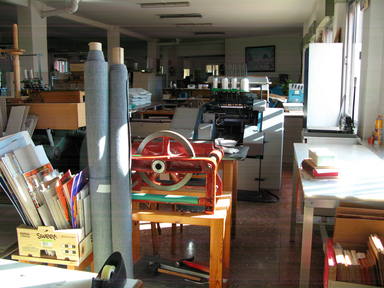 The Zamora Ascension Monastery It may be one of the most peculiar throughout the Spanish geography. It is well known that the sisters who live in these types of places carry out different tasks, and perhaps the most normal thing is that they are dedicated to selling sweets. In this case ECCLESIA has wanted to contact said monastery given the peculiarity of the function carried out by many of these sisters: own printing house and publishing house.

Sister gallant shell, OSB, answer our call to detail how it came about, how they are organized and how they live between ink and paper. He confesses that his missionIt’s like all the sisters because we do chain work. When they touch the books of the publisher itself, as they are generally on monastic spirituality, we all have something to say. In general, there is no specific mission, but each one of us has been internally assigned what we have to do in the editorial”.

Candy and bleach factories until reaching the printing press

When asked about how a publishing house arises in a monastery, she tells us that “the person who founded the monastery, logically had to provide a job for the community and they did several essays. They had a candy factory, a bleach factory and finally took the transfer of a printing press and very shortly after they thought of making books on monastic spirituality.. At first, due to internal necessity, because it was the time of the Second Vatican Council and the Latin books were being transferred to Spanish. Then they began to publish things for internal use which were given the name of Monte Casino editions. After that, publications began to be made that would benefit other monasteries or other interested people. Over time, many people interested in monastic spirituality have emerged outside the monasteries and this is still the case today.”.

Regarding the express management of the way to proceed, he states that “whoever is interested calls by phone and we see if there is capacity to assume the work that they ask of us. OROnce that is over, there is a first phase of composition that addresses the layout of the book on computers, for which there are some sisters in charge of it and then the entire printing process is followed with different sisters in charge. This provides work for everyone from the first step to the last step, which is the binding, the guillotine, etc.

Regarding the crisis of vocations that society is currently experiencing, Galán affirms that “I do believe that there is a crisis of vacations and a crisis of faith. Both things are there. It is true that perhaps now the two things come together because many times the people who find that grace of faith do everything or nothing, that is, they are people who find the religious life consecrated at the same time or very shortly after they find the life of faith. As a result of that they opt for a more intense life in that sense ”.

“We believers must think that perhaps God wants us to go through this because when one feels needed or naked is when the path of faith begins. We have gone through a difficult time and the lack of vacations is a vertigo that we see there. For example, We do not know how long this work that we carry out can last precisely for this reason, due to lack of personnel. Neither are the incomes so buoyant as to have the employees that would be needed in a place like this”.

The monastery of Zamora, which has its own printing press: “All the sisters do chain work”