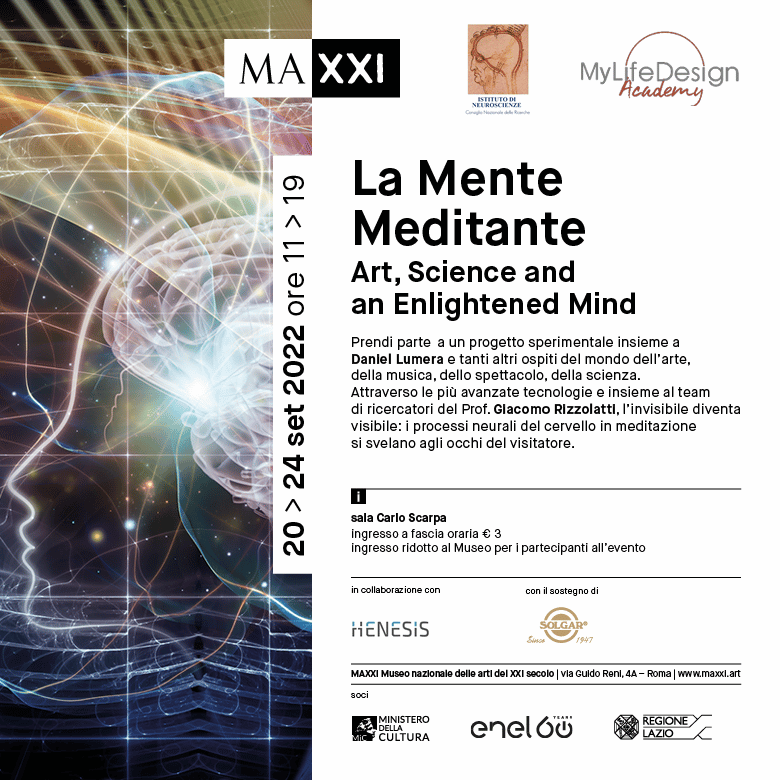 A research project which becomes one artistic performance. An initiative that combines three universal languages ​​such as art, science and meditation, and builds a bridge between ancient millenary practices and the most advanced discoveries of neuroscience. It’s about the project THE MEDITATING MIND. Art, Science, and an Enlightened Mindexperimental and avant-garde, al MAXXI in Rome since 20 to 24 September 2022, which was born from the unprecedented consortium between the National Museum of XXI Century Arts led by Giovanna Melandri; Institute of Neuroscience of the National Research Council (CNR), with Professor Giacomo Rizzolatti, discoverer of mirror neurons, and his team of researchers; Daniel Lumera, naturalist biologist, best-selling author and international reference in the sciences of well-being and in the practice of meditation. In collaboration with Henesis Srl and with the support of Solgar Italia Multinutrient SpA

“Meditation is a tool for cultivating peace”

THE MEDITATING MINDa unique event on the European scene, therefore celebrates the union between art, science and meditation, making visible usually invisible neural processes to the human eye. Thanks to science and the most advanced technologies, in fact, the neural activities of a meditating brain and the neurophysiological aspects on which meditation impacts are revealed, displayed in real time on a large screen in the form of colors, becoming themselves a work of art. At the same time, seeing what happens to the brain during meditation helps to study its effectiveness for physical and mental well-being.

Professor Giacomo Rizzolatti explained how the integration of these disciplines is essential for the study of the brain: “The integration between different disciplines within MAXXI it is an essential element to study how the brain reacts to the artwork and surrounding architectural space, but in an ecological environment. For this reason, the collaboration with MAXXI represents an exceptional opportunity for us to evaluate the neural processes underlying our ability to live and inhabit space. The idea of ​​approaching the meditative process with a public scientific method was also born from the meeting with Daniel Lumera, that is to make the neural activity visible not only to the meditating subject himself, but also to the viewer, in the ambitious idea of ​​creating an awareness in the visitor of the brain dynamics in progress during the meditation“.

Naturalist biologist Daniel Lumera feels very honored to be able to participate in this project: “This performance intends to merge three universal languagessuch as art, science and meditation, in a special architectural context, where shadow and light combine with sound and silence to expose the human brain and its ‘transformations’, through the millenary contemplative practices that modern science and neuroscience they recognized how natural medicine, of fundamental importance for our health, our well-being and the evolution of the human being itself, and through which we develop cognitive skills. Being able to do this, thanks to the profound sensitivity and avant-garde vision of the President of the MAXXI Foundation Giovanna Melandri who immediately supported the project, together with Professor Giacomo Rizzolatti, one of the world’s excellences in the field of science, it is a great honor and privilege for me. “

And the final comment of the President of the MAXXI Foundation could not be missing Giovanna Melandri: “We have always explored at MAXXI connections with other disciplines: the relationship between art and science in the exhibition Gravity; art and spirituality in Of the spiritual matter of art; art, artificial intelligence and digital technologies in What a Wonderful World. Is always, in the center of each project, the people, visitors who are an active part of each initiative. This is why it is a great honor for us to host and share this experience, open to our public, with Giacomo Rizzolatti and Daniel Lumera. I have long believed that meditation is a valuable tool for cultivating awareness and peace. The interesting aspect of this project is the possibility of giving visible form to this intuition. Seeing how a meditating mind works thus becomes performance-testimony of how neuronal activities change profoundly. “

Performance and the 4 states of meditation

Daniel will enter in a meditative state for about 7 hours a day for 5 daysfrom time to time with guests from the world of art, entertainment, science, but also with the public of the museum, once again the protagonist, making visible to participants and spectators, in the form of colors, all and four the meditative states described both by the ancient wisdom traditions and by the more than 8,000 scientific studies conducted on the theme: focused attention, sustained concentration, deep contemplation and real meditation, highlighting their unique characteristics. The audience will then see on a large screen, in the form of an oscillating color spectrum from blue to red, from cold to warmas the electroencephalographic (EEG) signal recorded by the scalp evolves over time during a meditation session, which lasts about 30 minutes. The signal will be transmitted wirelessly at very low power, via bluetooth, from the bands positioned on the head of Lumera and on that of the meditating guest next to him to a computer where it will be processed in real-time.

L’focused attention it consists in concentrating without distraction on a single object of attention, which can be internal or external to us, abstract or concrete: something that inspires us and that brings to mind impressions of peace, serenity or strength, well-being, clarity. There sustained concentration instead it has three fundamental characteristics: it is stable, intense and absolute; it does not require effort but presence, one is active in supporting it, but without any kind of forcing. It is a state of intentionality and will that allows us to be completely relaxed, present and at ease in this dimension of centering. There deep contemplationthen, it is characterized by mental silence, absence of definition and absence of judgment. When deep contemplation is sustained and prolonged, one naturally enters the phase of meditation, where you reach a condition of calm and lightness in which the breath becomes very deep; one no longer has the sensation of carrying out a practice, but a sense of integrity, of purity, a prelude to a unique sensation, as if the soul were “smiling”, becomes clear in our presence. The exercise is to let that state take over and surrender to it.

“The mind through”, in Rome the avant-garde performance that combines art, science and meditation