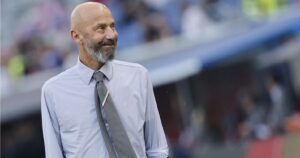 
Don Massimiliano, chaplain of the national football team: “He had the soul of a knight, with noble principles and great faith…, a person endowed with great spirituality, who had strengthened in these last years of his illness, lived with dignity and courage…”

IS still alive in us the emotion for the death of Sinisa Mihajlovicthat the world of football must mourn again, for the untimely death of another great man and great champion: Gianluca Viallifootballer, coach and sports manager, as well as television commentator.

The first steps on the pitch of Christ the King

Gianluca began his sporting history on the pitch of the oratory of Cristo Re, in Cremona, even if he never played with this team, because he was too small. He remembered: “The first membership was at the US San Bartolomeo di Grumello”, he immediately passed to Pizzighettone, and then moved to Cremonawhere it achieved promotion to Serie B and then to A. LIFEhe continues reminding us, that on the occasion of the party, for the sixty years of the Italian Sports Center of Cremona, he had sent a fax in which he said: “I still remember with much affection and nostalgia, when many and many years ago, I think it was in 1975, I was part of your large sports family, playing for my first real team, the Unione Sportiva San Bartolomeo of Grumello Cremonese”.

“The winner is the team that puts WE, always before IO“

For Vialli, the concept learned in the oratory was always in the foreground: “The winner is the team that puts WE, always before IO” and in the courses for young coaches of the CSI, in which he participated, he mainly spoke of his failures, because it was there that he found the desire to redeem himself and improve; this the boys felt from a champion, who had won everything.

It’s nice to remember a medal that Gianluca cared about very much, more than the prestigious ones he had won in his great football career: it was the one he had obtained by winning many years ago at the Cristo Re in the children’s tournament.

This was Gianluca Vialli, in his human reality, made up of great successes and exceptional sensitivity, who did not forget his past, like when as a child he waited anxiously in front of the door of the oratory for the legendary opening of 3.30 pm, to run and play with his brothers and friends.

The great footballer reminds us, with his story, his past at the beloved Sampdoria, at Juventus, in England with Chelsea, where he continued his career as a coach and finished his coaching experience after only one year at Watford, becoming a commentator on Sky Sport, with good success. In 2019 he was appointed manager and head of delegation of the national team.

In England, Vialli met his wife Cathryn, married in 2003. With her he had two daughters Sofia and Olivia. Vialli has always said that one of his biggest dreams was to walk them down the aisle, unfortunately he could not do it, he will do it with his spirit.

Fifth child, his parents, 87-year-old Maria Teresa and 92-year-old father Gianfranco live in Cremona. In 2017, following a jaundice, the discovery of the disease (pancreatic cancer) which, as he tells us Skysportsdefined a traveling companion.

On the 14th December of 2022, Gianluca Vialli communicates the suspension of his work commitments with the national team, to focus all his energies on tackling the disease.

The January 6, 2023 Gianluca is called by the Father. The chaplain of the national football team, Don Massimiliano, on Courier of Siena he remembers it like this: “He had the soul of a knight, with noble principles and great faith…, a person endowed with great spirituality, who had strengthened in these last years of his illness, lived with dignity and courage…”.

Hi Gianluca, thank you, we will always carry you in our hearts, an example of human dignity and greatness of mind.

The memory of Gianluca Vialli: a great player, but above all a great man – La Pietra Scartata