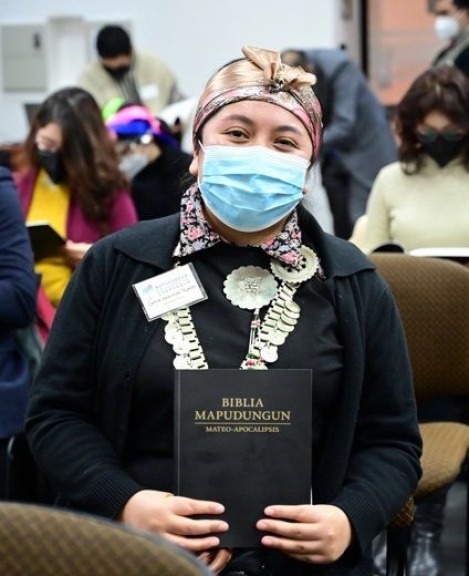 The Mapuzugun translation of the Bible was not well received by the Mapuche Confederation of Neuquén, who considered that the initiative could be understood as a new colonial advance towards their culture.

The translation project started 3 years ago and was developed by the Remote Translation Office of Jehovah’s Witnesses in Chile.

It was officially presented in June 2022 in Santiago with retransmission to the main cities of Chile, including Temuco, an area where various acts of violence linked to the Mapuche claim have taken place.

Some 250,000 people speak Mapudungun in southern Chile and Argentina, according to community data.

In a statement, the confederation pointed out strongly against the translation because, they consider, it intends to colonize and intervene in the culture of its people.

“In the face of attempts at colonization and religious domination,” the document is titled.

“Through the newspaper of the region, we are informed that the Jehovah’s Witness church has just published on its networks “The Mapuzugun Bible, Matthew-Apocalypse, translation made for the Mapuche of the 21st century”, “he continues.

“The use of language as a tool for cultural penetration is not new in this type of church with enormous economic power. The official website of Jehovah’s Witnesses, jw.orgis the most translated website in the world and includes content in more than 1,030 languages, including many indigenous languages ​​considered at risk of disappearing,” he continues.

“The Interculturality that we promote as a respectful way of relating does not mean, in any way, confusion or mixture. It means, on the contrary, respect for the multiple cultural and natural diversities.

The texts of a foreign religion put into a language that does not correspond to change us, to turn us into people alien to our own and ancient identity is something that we are going to condemn and reject”, he asserts.

The Jehovah’s Witnesses defend their project.

“Language is a communication system that identifies the community and, in the case of the Mapuche people, language also reflects their respect for nature and their spirituality. This condition makes them hold sacred texts in high esteem. However, most have not received education or literacy in writing in their own language,” explained Rodrigo Pérez, director of the Jehovah’s Witnesses Remote Translation Office in Chile.

Sources of the religious cult indicated that the Jehovah’s Witnesses are in contact with the communities “Paynefilu, Atreuco, Aucapan, Chiquilihuin, San Ignacio, El Salitral and Curruhuinca” in Junin and San Martin de los Andes. There is already a group of Mapuches studying with the translation, Mauricio Sarden, spokesman for the religious organization told LM Neuquén.

It is estimated that in Neuquén there are more than 3,600 members of Jehovah’s Witnesses,

The translation can be read on the site .

The Mapuche Confederation of Neuquén rejects the translation of the Bible into Mapuzugun | NoticiasNet – Information from Rio Negro, Patagones and the coast.