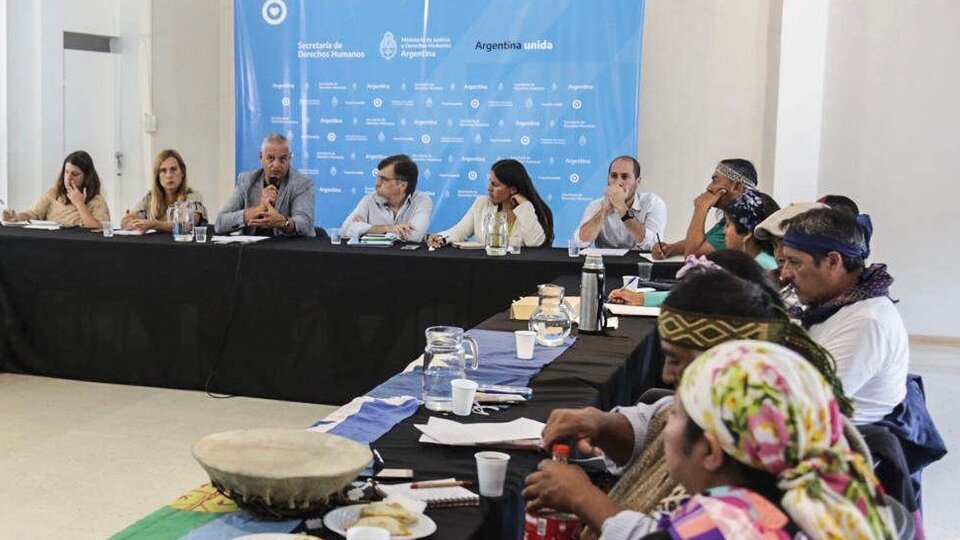 National and provincial authorities received representatives of eight Mapuche communities from Río Negro, Chubut and Neuquén to try to unblock the territorial conflict that the native people maintain in the area and that led to the eviction and repression of Villa Mascardi on October 4. The Committee of Traditional Authorities of the Mapuche and Mapuche Tehuelche People demanded the demilitarization of the area, the release of the four women detained with their children, and the dissolution of the Unified Command of Federal Forces, responsible for the operation.

The meeting had been agreed upon with President Alberto Fernández in December at the Casa Rosada and was also attended by representatives from human rights organizations and social organizations, such as veedores. The parties will meet again in 15 days in Bariloche. Next week there will be another meeting but with non-original citizens of Villa Mascardi.

There were no definitions in the second meeting between the Government and Mapuche referents, which lasted almost four hours. However, the president of the National Institute of Indigenous Affairs, Alejandro Marmoni, described as “auspicious” the continuity of the dialogue. “The approach to issues as complex as land, territory, and spirituality was productive. In any case, this is part of a long history of disagreements,” she said. in dialogue with Page 12Marmoni said that “the commitment is to continue working understanding that intercultural dialogue is the only way we have as a State to resolve these conflicts, and not with institutional repression as in the past.”

The meeting was convened by the Secretary of Human Rights of the Nation, Horacio Pietragalla Corti. On behalf of the Government there were representatives of National Parks and the Ministry of Security. The Secretary for Human Rights of Río Negro, Evangelina Saizar, was also present.

In dialogue with this newspaper, the spokesman for the Coordinator of the Mapuche Tehuelche Parliament of Río Negro, Orlando Carriqueorecognized that “There is a glimpse of the possibility of an agreement” in the short term, although “the government finds it difficult to resolve these issues because it has a history of refusing to recognize territories, in a conflict that already has several dialogue tables.” The referent affirmed that “resolving the territorial issue would also end the legal proceedings and the preventive detention” of the four women detained.

The next meeting will be on the 31st of this month in Bariloche. There, concrete definitions are expected for the Mapuche claims. “We point out to the State the breach of indigenous rights, the fact of carrying out the eviction in a place that has a rewe, a machi, is attacking the spirituality of a people, which is also condemned as an international crime,” said Carriqueo. . In this sense, the 12 referents who participated in the meeting requested the presence of authorities from the national ministries of Health and Women at the next meeting, to guarantee “access to our own health system as any indigenous people in the world have “.

The other issue to be discussed, the dissolution of the Unified Command that acted in the eviction, divides the waters. From the Federal Articulation Secretariat they maintain that it was the Justice that requested their intervention. The Mapuche entourage pointed out that it is the Executive that organizes the command and has the power to suppress it. Indigenous authorities and referents stated that they will continue working on the matter.