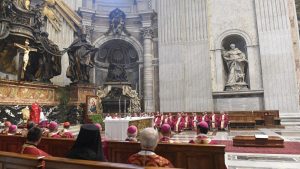 Amedeo Lomonaco, my article on VaticanNews –Cardinal Giovanni Battista Re, dean of the college of cardinals, celebrated the funeral of the prefect emeritus of the Congregation for the Evangelization of Peoples, who died last August 8 at the age of 98 at the altar of the chair in St. Peter’s. At the end, as usual, the Pope presided over the rite of the Last Commendatio and of the Valedictio.

“With him disappears a figure who did honor to the Roman Curia for the solidity of his faith, for the genuine spirituality, for the vivo sensus Ecclesiae, the great balance in the judgments, the calmness, the common sense, the amiability and the refinement of the trait “. With these words, Cardinal Giovanni Battista Re, dean of the college of cardinals, recalled Cardinal Jozef Tomko during the funeral liturgy in the Vatican Basilica. The Pope arrived at the beginning of the celebration, stopping for its entire duration, then he read at the end the formula of theLast Commendatio and of Valedictio, while the blessing was given by Cardinal Re. In his homily he retraced the “long and intense life of Cardinal Tomko”, who died last Monday in his residence in Rome. Former secretary general of the Synod of Bishops, prefect emeritus of the then Congregation for the Evangelization of Peoples (today Dicastery) and president emeritus of the Pontifical Committee for International Eucharistic Congresses, he was the most senior member of the college of cardinals. On the occasion of Pope Francis’ apostolic journey to Slovakia, from 12 to 15 September 2021, Cardinal Tomko attended the meeting with young people in the Lokomotiva stadium in Košice. On 30 April 2022 he was also in the Paul VI Hall with the pilgrims who had come from Slovakia. His presence, the Pontiff said on that occasion, “makes us feel that the Church is a family that knows how to honor old age as a gift”.

A life marked by missionary enthusiasm

Cardinal Jozef Tomko’s life was marked, Cardinal Re recalled, by service to God and to the brothers. He entered the seminary of the archdiocese of Kosice at a very young age. As soon as the Second World War ended in 1945, he was sent to Rome to complete his studies. “After completing his studies – said the dean of the college of cardinals – the historical events of his nation, due to the fact that we know the installation of the Czechoslovakian Socialist Republic and the opposition of the Communist government towards the Catholic Church”, prevent him from returning to homeland. Another significant date is that of March 12, 1949, the day on which Jozef Tomko was ordained a priest in Rome. On July 12, 1979, St. John Paul II entrusted him with the office of general secretary of the Synod of Bishops and personally conferred on him the episcopal ordination. Since only very few people had been able to obtain permission from the Czechoslovakian government to come to Rome, the episcopal ordination does not take place in the Vatican Basilica – as it was originally planned – but in the Sistine Chapel, a smaller room.. And furthermore, out of pontifical desire, Cardinal Re underlined, the celebration “was characterized by particular solemnity, because the Pope wanted to emphasize his closeness to Slovakia and to the whole Church of silence in that very hard and difficult moment for Catholics residing beyond what Churcill called the Iron Curtain ”.

After the funeral in St. Peter’s Basilica, a special plane, offered by the Slovak government, will bring the body of Cardinal Tomko to Bratislava, which will be exposed for the veneration of the faithful for two days in the city cathedral. Subsequently, the remains will reach the city of Košice for a last farewell to the faithful and for the celebration of the funeral, which will take place on August 16 in the local cathedral of St. Elizabeth where the cardinal will then be buried. It should be remembered that for over 70 years, on the last Sunday of the month, Cardinal Tomko edited a program lasting about 10 minutes on ecclesial life in Slovakia for Vatican Radio. Pages of faith particularly listened to and appreciated, especially during the years of the “Church of silence” under communist domination.

The funeral of Cardinal Tomko. Cardinal Re: he was a man of solid faith-Amedeo Lomonaco