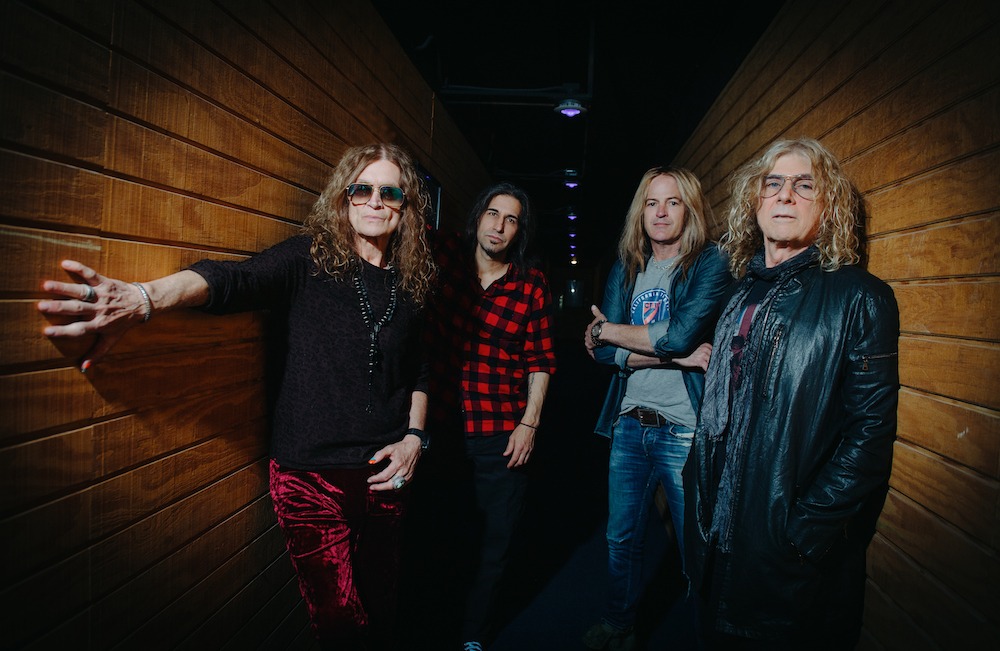 THE DEAD DAISIES, the supergroup masterfully led by David Lowy, is back with “Radiance”, sixth album recorded in Los Angeles with producer Ben Grosse.
Doug Aldrich and Brian Tichy were expected for this interview and, to our surprise, it was legend Glenn “The Voice” Hughes who appeared at the other end of the zoom, from his hotel room in New York.

As a true gentleman that we know, he talks to us about this album, the band and its future in an atmosphere that is, to say the least… luminous.

” radiation » is your sixth studio album. How do you consider it compared to the other THE DEAD DAISIES albums?
It’s a bit different from previous albums, I think. It’s heavier, I think, and above all, it has this very British sound. It clearly marks an evolution in the DEAD DAISIES discography.

The word “Radiance” – clarity – conveys a very positive notion. Can you explain the concept more precisely?
Indeed, you are right. Basically, the song presents a very heavy riff for me. This riff, I wrote it. I wanted to draw the portrait of something full of energy and spirituality. An energetic spirituality. “Radiance” is the brilliance of light, the fact of shining. It’s universal love, in my eyes. To bring love to beings spiritually, to live the human experience. We have gone through difficult times as human beings. So there is, as you mention, this positive emotional side for all of us. I am talking about light, brilliant reflections in the positive sense of the term. This burst of light is also the current translation of my life.

The DEAD DAISIES today embody a kind of big rock family with perpetual line-up changes and, at the same time, almost paradoxically, a stability, a musical consistency of quality. It’s your second album with the band and you managed to create something different, a form of continuity in the rupture…
It’s true, people come and go. John Corabi is gone. Brian Tichy is back. Me, it’s my second album. The band members are friends and it’s a beautiful family. Fans should familiarize themselves with the fact that it is unknown who will be in this group. We don’t know ourselves (laughs) ! Originally, David Lowy asked me to come and write songs for the band. What I have done. I am a composer. That’s what I appreciate the most. I like to write and compose.

The previous album, “Holy Ground”, was recorded in France. For “Radiance”, it was made in Los Angeles, but always with Ben Grosse as producer.
Initially, we wanted to return to France, to the Studios de la Fabrique. We had a great time there, but it was very difficult for us, very complicated to travel at that time. We hope to return there soon. This time we actually did it in LA with Ben. He has two studios, one in Burbank, the other in North Hollywood. It was much easier for all of us to record this new album under these conditions. The songs were all written before we got into the studio. Doug Aldrich and I took care of that. The two of us ended up in a room with Ben and he gave his opinion on what worked and what didn’t work. That’s how it all started.

What is Glenn Hughes’ creative manual?
It always starts with an idea that arises. I express it and highlight it in my home studio. I test things and see how a song can come out of it. As I told you, I worked with Doug on this album. If I come up with an idea, Doug helps me, just like the reverse is also true. I always write melodies and lyrics. This writing process is the same as that which was naturally established between us on “Holy Ground”.

For “Radiance”, I heard that you recorded it under live conditions. Was it an intentional move or a coincidence?
Yeah! (in a cheerful tone) I love to record live. This is my modus operandi. We were in the same room every day. It was the same every day. We were playing the titles and it was a great moment. I’m not a fan of sending music files via computer. I have tried to change, but it does not work, it does not suit me. In 2005, I recorded “Soul Mover” with my friend Chad Smith, the drummer of RED HOT CHILI PEPPERS. He had suggested that we play live, something I was already doing with DEEP PURPLE of course on “Burn” and “Stormbringer”. But it took me 20 years to play live in the studio again. Honestly, that’s my favorite!

“I love recording live. It’s my way of working. I’m not a fan of sending music files by computer. I tried to change, but it doesn’t work, it doesn’t suit me.”

Surprisingly, the first four singles that were presented to the public happened to be the first four songs on the album. It’s quite unusual!
It’s not me who chose the order of release of these singles but nevertheless, these songs are great songs. I can feel when songs are going to give something away.

What are your favorite songs on “Radiance” and, more generally, the strengths of the latter?

(he thinks) There are so many in my opinion. The title track is groovy, hard rock. A great moment and a great title to play in concert. “Hypnotize Yourself” is fantastic: it sounds like a song from the 1970s, with great vibes. “Face Your Fear” has that classic rock side of the 1970s as well. When I brought that riff up, I felt completely myself. And then, I love the last song, “Roll On”.

“Roll On” just closes the album. It’s an absolutely magnificent title, imbued with a multitude of emotions… Can we reflect on it for a moment?
Obviously. Last Christmas, the manager of the group contacted me to ask me to write a song cut for the radio. I immediately had the idea and wrote what “Roll On” was going to be. The title came to me like this. I didn’t know if the band was going to like it. I made them listen, they liked it and then I finished the composition. The idea was to drive, to be on a highway, to leave all your problems behind, to move on with your life, to breathe… to continue to breathe. This is what I wanted to express on this title.

Regarding “Hypnotize Yourself”, I wondered if you practice hypnosis, meditation or something like that?
I meditate every day. I use my breath. This title is rather based on the idea of ​​putting your mind on standby. The mind is a dangerous place, right? (laughter) Thinking about something too long or obsessively is not good in the long run. I prefer to be in a “non-thinking” mode, than constantly thinking. “Hypnotize Yourself” implies putting your mind in a state of tranquility, calm.

Considering this rather incredible creative capacity, of your sessions of composition and recording, did you leave aside songs which will appear sooner or later in bonus?
Yes, two, and they are frankly fantastic. You will be able to listen to them soon. One is called “Let It Set You Free” and the other is “The Healer”. It will be available in a few months and I hope you enjoy!

On a more personal level, a few months ago you had complicated times at the end of the DEAD DAISIES European tour because of COVID. And we must admit that the fans were disappointed not to have you at Hellfest!
I know… And me, so! David Lowy caught it the day we were supposed to perform at Hellfest. We were in France, in transit, and I got it in Paris.

Did you manage to recover quickly?
It lasted two weeks, however, I was positive for 9 days! But everything is fine now.

But before that happened, how was this tour going?
Great, the spirit of the group and the team was really great! The tour was a blast and even though it was long – 11 weeks on the road – it was fantastic!

How were Dino Jelusick on vocals and Yogi Lonich on bass finally hired for the last shows? Of them men for a Glenn!
Yogi is known to the group. David makes him play from time to time when he cannot be present. When I fell ill, they decided to continue and fulfill their contractual obligations. There were 7 shows left. They asked Dino to come and sing without prior preparation. He is a young and good singer. He was hired and they finished the tour.

Which titles of “Radiance” will you favor on stage?
It will be “Shine On”, “Hypnotize Yourself”, “Face Your Fear” and “Radiance”, the four singles previously posted online. You also have to juggle with the rest of the group’s repertoire!

Let’s talk about projects now…
For the moment, as you can see, I’m promoting “Radiance”, the upcoming tour that’s coming and I’m preparing to enter a cycle of concerts over a year probably. Afterwards, I will probably work again with Joe Bonamassa, Jason Bonham, Derek Sherinian. As I speak to you, there is no plan, but we will do it, this number 5 of BLACK COUNTRY COMMUNION.

After all these years, so many records, bands, contributions, do you still have dreams for projects you’ve never done yet?
I think… I think the end of my career will be towards something solo. I can’t say when, though. Right now I’m focused on DEAD DAISIES. I know I still have more songs to write, lots of gigs to play and I’m looking forward to that. 10 years ago, I released my autobiography. I could update this book or write another, rather. I know I have one in me just waiting to see the light of day. It would be around the spiritual progression of my life.

How do you spend your time when you’re not in the studio or on tour?
I swim. I love that ! I read books. I am deeply into spirituality and my readings go in this direction. I am in the opening of the shakras now. I remain attached to the present moment, meditation contributes to it, by devoting myself to beautiful goals. I changed my life 30 years ago when I smoked tobacco, drank alcohol and used drugs. I am happy in my marriage. I love music. I am especially grateful to be able to breathe (laughter).

“I changed my life 30 years ago, when I smoked tobacco, drank alcohol and used drugs. I am happy in my marriage. I love music. Most of all I am grateful to be able to breathe .”

My last question: I’m a psychiatrist in a parallel life. What is your positive addiction?
Tremendous ! (He thinks) Like I said: just breathe. Breathing is everything, if we just take the time to do it when we wake up. Breathing refocuses us. If you forget to breathe in the morning, you are on the wrong path. So for me (he begins to breathe as in a meditation exercise), it’s just to res…pi…reeeerrrr! It is central in my life!