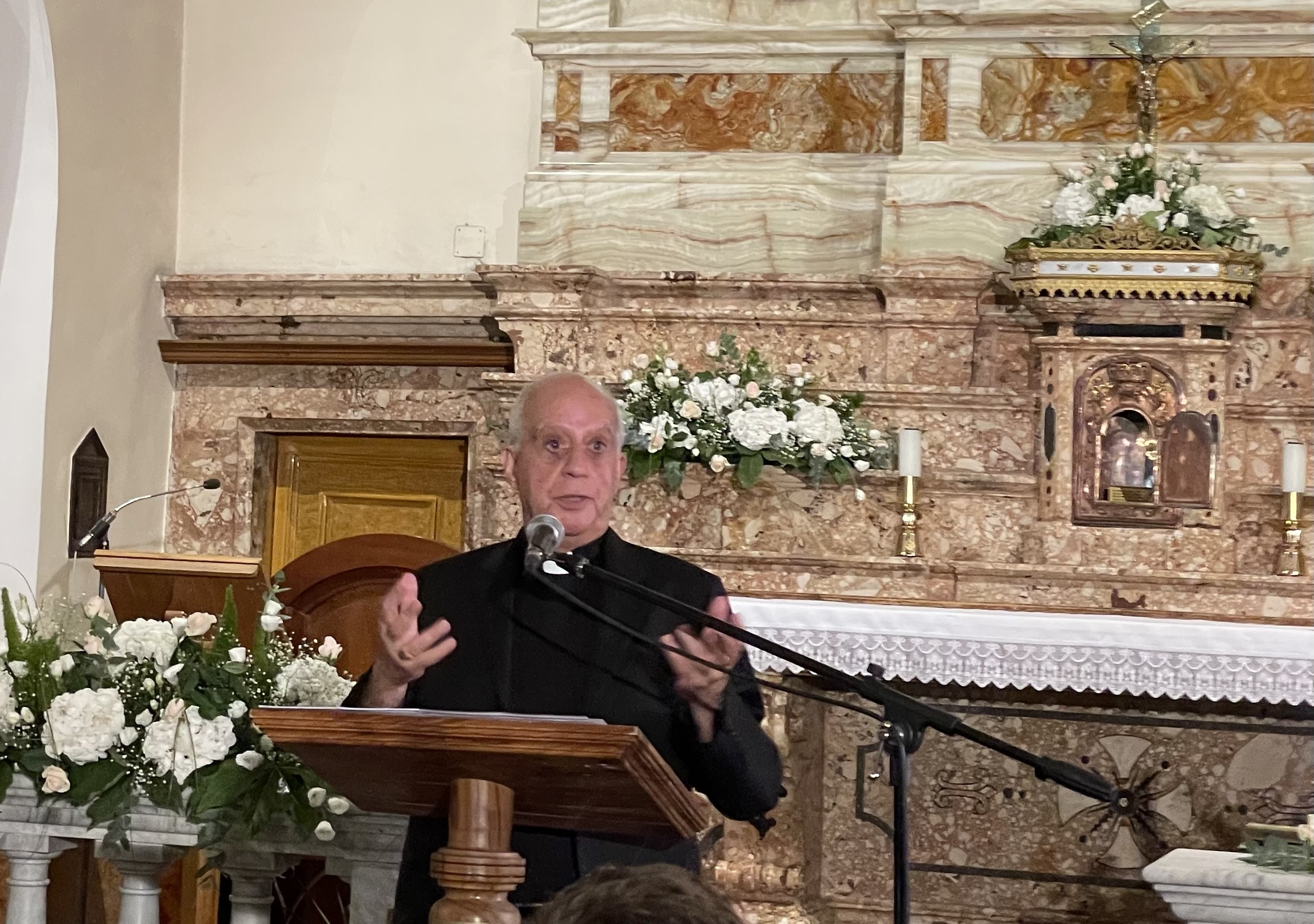 “There via pulchritudinis, That is, the way of beauty, is a “privileged form for evangelization”. This was stated by Msgr. Rino Fisichella, pro prefect of the Dicastery for Evangelization, section for the Fundamental Issues of Evangelization in the World, in his conference on “Art, a form of evangelization”, held in the ancient convent church during the first “Day of spirituality for artists, sportsmen and communication professionals ”, which took place yesterday afternoon in San Giovanni Rotondo, organized by the Capuchin Friars Minor.

The intervention of Msgr. Fisichella was preceded by an introduction by Br. Francesco Dileo, rector of the Sanctuary of San Pio da Pietrelcina, and with the greetings of fr. Maurizio Placentino, provincial minister of the religious province of Sant’Angelo and Padre Pio, of the mayor of the city Michele Crisetti and of Father Franco Moscone, archbishop of Manfredonia – Vieste – San Giovanni Rotondo.

«Art, in all its manifestations, allows to give voice to the experience of beauty as the original form of the human soul and as a principle of transformation of the very personal existence. Beauty reveals man to man and makes him known at the same time the enigmatic nature and the greatness of his being in the world “, explained the Archbishop pro prefect of the Holy See, who then added:” I believe, in this context, that the way of beauty can be a way to go in order to restore hope to the many who still feel the desire, the nostalgia and the need for faith “. So Msgr. Fisichella posed two questions: «Faced with the generalized intoxication of the contemporary world, can we think that” beauty “will be able to save the Church and restore speculative strength to theology? In the same way we could ask ourselves: will the world and the Church be able to save beauty? ». Two questions that are difficult to answer, given that “what is happening before our eyes, especially in the metropolis, seems to be rather the degradation, consequent to the weakness of thought, which makes the inherited beauty opaque, preventing the production of new beauty. . Such a situation leads only to the decay of culture and of social and personal life ». From this analysis arises the need to remind believers “of the responsibility to be heralds of beauty, and to make beauty the instrument of their proclamation of Christ to today’s world”.

The first report was followed by that of Father Luciano Lotti, general secretary of the Padre Pio Prayer Groups, who recounted the three most important conversions obtained by the mystical Friar among the many celebrities who came to San Giovanni Rotondo to meet him: Carlo Campanini, Erminio Macario and Beniamino Gigli. The first, after changing his life, spent the last years of his existence witnessing the wonders worked by the Lord through his spiritual Father, with lectures and interviews. Furthermore, he asked and obtained to be buried in the cemetery of the Gargano city to remain forever close to the Capuchin who helped him to leave the path of sin. Macario, who came to ask for Padre Pio’s intercession to revive the fortunes of a show that was not going well, received a strange response: “God will reward you twice”. In fact, he got two graces from the Lord: the return of success and the declaration of nullity of his marriage, which allowed him to marry the woman he loved and with whom he shared the rest of his life. Gigli, after being shaken by the strong words of the charismatic Friar, who played with his name to make him understand that his life did not reflect the purity of the white flower, returned to marital fidelity and became a regular visitor to San Giovanni Rotondo, often cheering Father Pio with his tenor voice. Father Luciano then explained that his holy Brother tolerated having people with questionable morality at his side, in order to be able to sow the seed of faith in their hearts, patiently waiting for the moment of conversion, which is always a gift from God.

Almost in continuity with the story of these experiences, during the homily of the Mass, which he presided immediately after in the sanctuary of Santa Maria delle Grazie, Msgr. Fisichella took inspiration from the Gospel of the day to affirm: «The most important thing before God is not the Law, but every single person. The man who has made a mistake, that he is wrong, is a man who needs God, who can recover, who can get up again. There is a particular, singular look of God on each of us. A glance of his love of him and of his mercy ».

The initiative ended with a moment of prayer, presided over by Br. Luciano and held in the lower church of San Pio da Pietrelcina, which houses the distinguished relic of the saint’s body, during which some friars made themselves available for confessions and personal meetings, in an atmosphere of moving meditation.