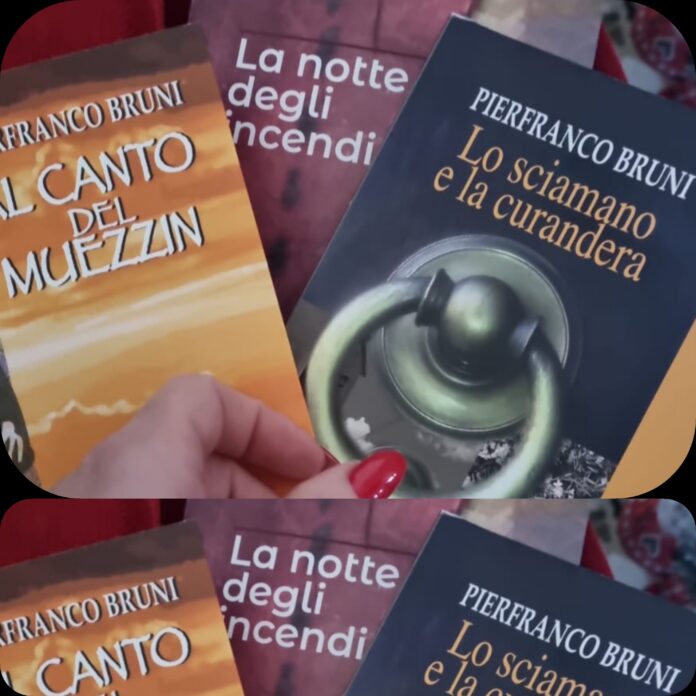 Writing is complicity: an invitation to fly and the journey is accomplished.
Getting on the flying carpet of writing and immersing yourself in the charm of the night among the thousand adventures of words is the emotion that ensures this recently published trilogy, for the types of Pellegrini editore celebrating its 70 years of publishing activity, by Pierfranco Bruni .
Three “yes” pronounced three times…
“yes” to infinite loves in “Al canto del muezzin”
“yes” to the broken memories in “The shaman and the curandera”, “yes” to the finished stories in “The night of the fires”.
Three “yes”, ringed in a trilogy and delivered to Scripture, the only true faithful great love of Pierfraco Bruni.

He and she, Garcia and Sarashil live between East and West and chase each other between irony and patience, in the disturbing physicality of desire and in the poignant spirituality of the Beyond.
Again a special He and She, Beginning and End of life by the same writer: the Father-shaman and the Mother-curandera, both cut and heal the wounds of birth and death and transform the substance of life into absences to be filled with nostalgia that “rend the heart”.

Finally, a myriad of characters that crowd the mind, the pages and the heart: Isa and Diego, Esmeralda and Gustavo, Palma, Myriam, Laura in the finiteness of their loves between escape and madness, in the letters of the “unattended diary”, which involve the narrative voice and the writing hand with a beginning and a closure all to be defined in that suspended “my dear”.
Three stories that, like three hooks, try to grab edges of the soul, ruffled by the wind of the days, in a breathtaking writing, which never satisfies the desire to comprehend that Brunian “I”, always iridescent and always the same, which disguises itself depending on the two inspiring “muses” disputes of the moment.

This is how Light and Shadow – they are the hated Muses – create plays of color in an iridescent writing, which oscillates between worlds, with the awareness that “there is an Orient submerged in our souls. It remains enclosed in a silence that is made of colours. The colors (…) give us the dream of the imaginary”.

In the subsoil of Bruno’s poetic conscience, that complex and fascinating Mystery-word “happens”, for which the aquifers, now fill up with lymph, feed themselves with “imaginative faculty”, now run out, to then resurface on the sheet.
So Bruni becomes the Sarashil who has yet to complete her novel Life in a text waiting to be written and which perhaps will develop into other trilogies or will still remain unfinished, because, in truth, Bruni whispers to us that the pages are pieces of soul that asks only and still to live.
“… that’s why I gave you the swinging seesaw of the metaphor”.
A promise!

The dance of the veil in Pierfranco Bruni’s writing of the trilogy – politicamentecorretto.com

Delpini after the jokes about Pope Francis: "Criticized for my irony, they want a boring Church"
SCHOPENAUER AND MAN'S INELUTABLE CONDITION OF UNHAPPINESS
Jewish community in Salta celebrates another year of creation
Tweet
Share
Share
Pin