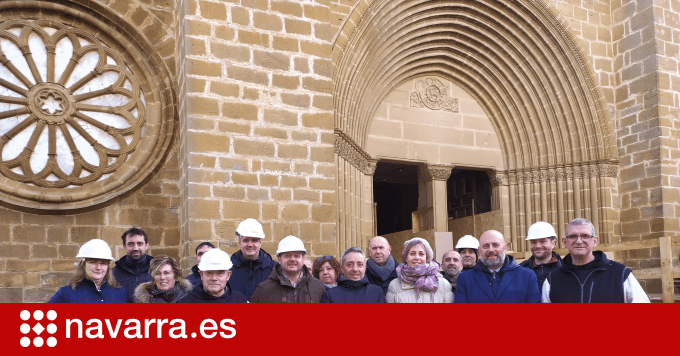 The Minister of Culture and Sport, Rebeca Esnaola, visited this morning in Carcastillo the restoration works inside the abbey church of the monastery of Santa María de La Oliva. During her visit, she was accompanied by the abbot of the monastery, Javier Urós; the Government delegate in Navarra, José Luis Arasti and the mayor of Carcastillo, Javier Igal.

The works, promoted by the community of Cistercian monks, began on September 27 under the supervision of the technical staff of the Historical Heritage Service of the General Directorate of Culture – Príncipe de Viana Institution. The completion of these works is scheduled for May 2024.

The works, whose budget amounts to almost 3 million euros, have a subsidy of 60% of the total amount charged to the 1.5% cultural program for the conservation of Spanish historical heritage granted by the Ministry of Transport, Mobility and Agenda Urban due to the cultural relevance of the monastery.

The Government of Navarra, through the Foundation for the Conservation of Historical Heritage (FCPHN), also contributes the amount of 200,000 euros to contribute to the financing of the works, understanding that the monastery has “an undeniable heritage value and that it constitutes, In addition to being an important center of spirituality linked to the Cistercian community and Navarra, an essential element to structure a revaluation proposal that generates economic, cultural and social wealth, with a tourist dimension and in a region identified in intense decline and adjacent to risk areas. extreme depopulation according to the zoning carried out by the Government of Navarra in 2021”, as stated in the agreement signed by the FCPHN and the monastery.

In addition to the architectural restoration of the abbey church, the intervention involves maintaining and ensuring the symbolic role that the monastery plays in the surrounding populations, whose inhabitants perceive and appreciate it as a sign of identity for its historical, artistic and monumental values.

Said intervention will also entail a project for the dissemination of cultural heritage that will allow the public dissemination in the social and educational field of the works that have been projected. In this sense, the monastery and the Historical Heritage Service plan to carry out a program of guided tours in collaboration during the execution of the works to publicize the development of the restoration work whenever conservation and security measures allow it. This work may be complemented with training tasks such as conferences, exhibitions or publications.

Activities planned in the church

The action started last year aims to recover the architectural qualities of the interior of the temple. For this, the floors, walls, vaults, door carpentry and window closures will be recovered, as well as all movable property, liturgical furniture and technical installations.

Damp stains, salt efflorescence, scabs from water runoff, cracks in the vault of the last section of the central nave and voussoir movements in some arches of the south side nave can be seen in a general way in the vaults of the temple.

The origin of the deterioration of the vaults of the temple and sacristy was due to the infiltration of water from the roof, which was resolved with the restoration works carried out in 2007. In the walls and pillars there is a loss of stone material and the grouting in large areas, and several replacements carried out decades ago with cement mortar, which are not compatible with stone. Humidity also affects the baseboards of the walls, bases of the pillars, and chapels. To solve all these problems, they will be cleaned, faults will be replaced and pillars, walls and vaults will be rejoined, in addition to applying a lime glaze.

The flooring of the warehouses is a mass concrete floor directly seated on the ground. Its state of preservation is precarious with significant section losses and breaks in many areas, which in some cases poses a risk of falls. There are extensive moisture stains on the flooring of the warehouses in contact with the ground saturated with water. The entire paving of the temple will be laid with sandstone slabs and the chapels, once restored, will be integrated with glazed ceramic pieces from the Renaissance period that they still conserved.

There are important remains of mural paintings from the medieval and Renaissance periods with exploded views, of unquestionable cultural and historical value, in many parts of the church, as well as graffiti on the walls and columns. All these pictorial remains will be the object of study, cleaning and consolidation, as well as personal property and liturgical furniture linked to worship.

Said action will allow to recover the value of the building of the monastery, improve its current conditions of use and conservation, and enable its better perception and appreciation by those who visit it.

The monastery of Santa María de La Oliva was declared a National Historic-Artistic Monument by Royal Order of April 24, 1880. It currently holds the protection category of Asset of Cultural Interest in application of the provisions of Ley Foral 14/2005 , of November 22, of the Cultural Heritage of Navarre.

The main and fundamental use of the monastery is religious, maintained by the community of Trappist Cistercian monks who have inhabited it since 1927, the year in which monastic life was restored after the exclaustrations of the 19th century. In addition to religious use, tourist and cultural use are of great importance for the monastery, whose relevance far transcends the sphere of influence of the area.

The first restoration works carried out in the monastery on the occasion of the return of the religious community after the 19th century confiscation, were carried out between 1923 and 1930. Those works were financed by the Provincial Council, supervised by the Monuments Commission of Navarre, and focused in the restoration of the church to save it from ruin.

In recent times, it should be noted that the most extensive works on the outside of the temple (roofs, west façade and tower) were carried out between 2006 and 2010 with the direct intervention of the Príncipe de Viana Institution in financing and contracting the works , and in the drafting of the projects and construction management of the technicians of the Section of Architectural Heritage.