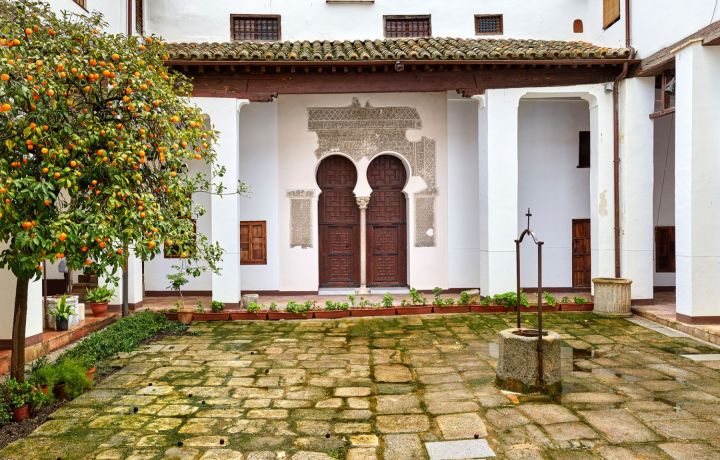 A virtual tour behind the walls of the Convent Santa María del Real, in Toledo. It is not a visit to a museum, but the discovery of the life of prayer and work of the contemplative nuns, successors of St. Clare of Assisi

It is not about visiting a museum. The Convent of Santa María del Real of Toledo (Spain) opens its doors to offer something totally new. Now it is possible to enter those walls that for 700 years have preserved the cloister of nuns descending from Saint Clare of Assisi, founder – together with Saint Francis – of the Franciscan Poor Clares.

If you are not lucky enough to be able to go to the “imperial city”, do not worry: we will allow you to enjoy a virtual tour where you can discover not only art, but also the faith and spirituality radiated for seven centuries by these women who have dedicated his life to the contemplation of God.

The experience of discovering the cloister

The idea of ​​opening the doors of one of the most historic Franciscan monasteries in Spain, and also in Europe, arose spontaneously when the small community of nuns decided to join another community of Poor Clares of Toledo, the nuns of Madridejosto optimize space and resources in the face of the decrease in vocations.

The nuns could have sold the convent. Businesses in the tourism sector would have jumped at the opportunity to open a historic luxury hotel there. Another possibility would have been to get rid of this responsibility by giving the structure to the local authorities to transform it into a museum.

The nuns, however, were courageous and decided to keep their presence so that the visit to this place is not simply a historical and artistic experience, but can also be transformed into a spiritual experience for visitors.

A community that dates back to Santa Chiara d’Assisi

Let’s retrace history a bit. The Franciscan Poor Clares arrived in Toledo when their founder, St. Clare of Assisi (1194-1253) was still alive.

After years of presence in the city, the project for the foundation of the current convent arose. Historical documents testify that it began to be concretized around 1340 by the will of a lady of the nobility of Toledo, María Meléndez, belonging to a Mozárabe family.

On June 27, 1371, Pope Gregory XI promulgated the bull in Avignon Piis devotorumwith which he authorized María Meléndez to found the convent of Clarisse, establishing that it should have equipped it with everything necessary so that thirty nuns could live there.

At that time, Inés Enríquez and her sister Isabel, illegitimate daughters of King Henry II of Castile, professed as religious in this convent, which was already one of the most important in the city. For this reason, from 1372 the convent began to be called “Santa Clara la Real”.

The visit to the convent begins with a door typical of the 14th century buildings of Toledo. Inside, the cloister is organized around two courtyards or cloisters, that of the Orange and that of the Laurel. Around these are the main conventual structures – the church and the choir, the Chapter House, the Sala de Profundis… – and others for daily use.

The visitor can also admire important examples of Mudejar art (the artistic style of the Christian kingdoms of the Iberian Peninsula of the time, which included Spanish-Muslim influences), such as paintings, sculptures and works of goldsmiths of incalculable value.

Aleteia, a Catholic global information network, by virtue of its mission contributes, in collaboration with the Fundación DeClausurato communicate the life, spirituality and products of contemplative monasteries.