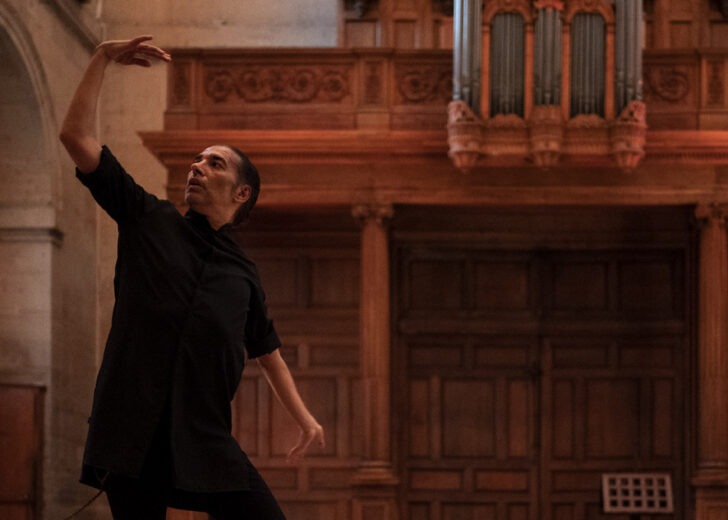 First show of the 2022-2023 dance season in Paris, 8 Solos 8 by Israel Galván offers a sober and intimate experience in the heart of the Saint-Louis-de-la-Salpêtrière chapel.

The great flamenco dancer Israel Galván, holding a pure and austere line in his art, was visibly inspired by the spirituality emanating from the Saint-Louis-de-la-Salpêtrière chapel, built by Le Vau at the request of Louis XIV. for the Salpêtrière hospital, to offer a new version of his solo there, entitled 8 Solos 8.

Accompanied on the great organ by Benjamin Alard who plays a few sonatas by Scarlatti, the dancer offers a wandering in the main nave and in the heart of the central chapel. First exclusively lit by natural light that pierces through the windows and the summit oculus, the performance is highlighted by a few orange spotlights, while remaining intensely sober.

Followed by a silent and fervent crowd, the sleek silhouette of the bailor first seems to be only a line of Indian ink. Black tunic with Mao collar, narrow pants and white shoes hugging the foot, he walks in a straight line and at small zapateados the double width of the nave. Feet almost together, he concentrates on the sound he produces, first on the stone floor, then on the wooden ramps also taken by spectators eager to miss no bending of their eyebrows, movement of their feet or carrying their dancer’s arms.

The choreographic proposal is released over the course of the show and becomes fuller and more generous, with more assertive arm movements. Israel Galván gradually joins the center of the chapel, anchoring himself under the oculus in a sonorized circle of gray sand that he makes crunch with the tip or the heel of his shoe. The experiment then becomes sonic, doubling in intensity and concentration. Virtuoso in its minimalism, the choreography is as much about performance as it is about straight-forward writing.

It is only in the very last part of the show, a more frontal arrangement at the foot of the great neo-baroque organ, nestled in a side chapel, that Israel Galván gives free rein to his creativity and his imagination. Using his hands, his body then becomes a musical instrument and playground, competing with the organ or having fun talking with it. A wonderful and clear experience.

The classic austerity of Israel Galván in 8 Solos 8 – ResMusica