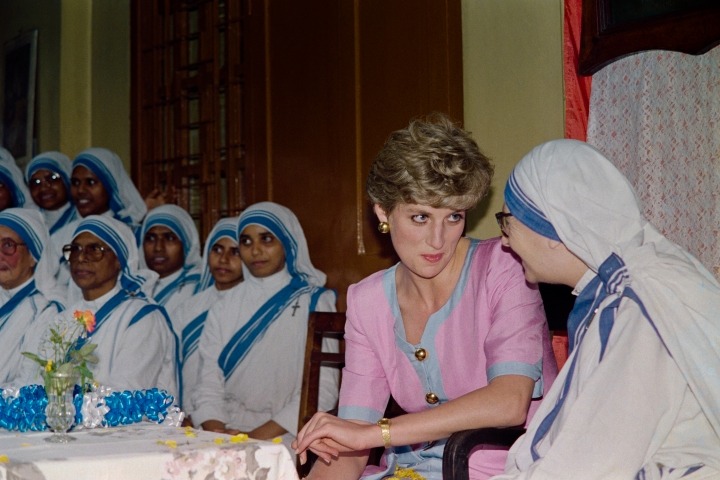 25 years after her death, Lady Diana’s tragic life continues to arouse affection and curiosity. But there is another person very close to her who is worth knowing about her: her mother

Diana of Wales was never Catholic, although the friendship that bound her to Mother Teresa of Calcutta is known. It is at this point that according to what has been made known by the Daily Mail in a report on her death, she was buried with a rosary in her hands.

Warned of the incident, her butler, Paul Burrell, took the rosary that the saint had given her and that Diana had placed on an image of the Madonna from the princess’s bedside table.

The Daily Mail he also announced the presence of a Catholic priest who prayed for ten hours next to Diana’s corpse. Chance or not, Father Yves-Marie Clochard-Bossuet, hospital chaplain Pitié-Salpêtrière of Paris, was called urgently on the night between 30 and 31 August because the Anglican chaplain was not found.

A week later, the same chaplain celebrated a Catholic Mass for Diana’s eternal rest in the hospital where she died, at the request of her mother. Because Diana’s mother, Frances Shand Kydd, was Catholic instead, and she had converted just three years before the tragic accident.

There were also links with the Catholic Church on his father’s side. Indeed, on February 20, 2021, the Pope raised Diana’s great-grandfather, George Spencer, to the honor of the altars. Anglican pastor, he converted to Catholicism and entered the congregation of the Passionists, then dedicating much of his life to working to restore England to Catholicism.

The conversion of the mother

Frances Roche belonged to a noble family from England. Daughter of the Baron of Fermoy, a friend of King George VI, she was married at 18 to John Althorp, twelve years her senior. Another illustrious heir, this time of the Viscounts Spencer.

According to her family members, the pressure on Frances to have a son to inherit the title (she had three daughters and a child who lived a few days before little Charles was born) destroyed the marriage. She was unfaithful to her husband and the protagonist of a scandalous divorce in the 1960s, in which even her mother, Lady Fermoy, testified against her. Frances has also lost custody of her children.

She then married her lover, Peter Shand Kydd, an Australian heir to a large fortune, and practically retired from public life. The couple bought a house on the Scottish island of Seil, where she opened a souvenir shop. Frances has become totally integrated into the life of the island, content with her modest existence.

His voluntary retirement from the world, however, failed with the wedding, the unfortunate marriage and the subsequent divorce of his daughter Diana. For the second time, her life sank, but this time it was Peter who left her for a younger woman in 1988. According to Frances, she could not stand the media pressure.

In 1994, alone, Frances converted to Catholicism, and until the end of her days she devoted herself totally to works of charity. It is known that she regularly went on pilgrimage to Lourdes assisting the sick.

However, there was still a long way to go before he could rest in peace.

When he learned of his daughter’s death in the Alma tunnel in Paris, he had no contact with her for several months. Diana had not forgiven her mother for her unfortunate comments on the magazine Hello!. Those who knew Frances of her say that although she was unable to reconcile in time with her daughter, she accompanied her until her death.

Much commented on it was her gesture of hugging driver Henri Paul’s parents during Diana’s funeral, telling them that losing a child was “the greatest pain of all”.

P. Clochard later reported to the Daily Mail that Frances had asked him to celebrate a Mass for her daughter and that she had gone to Paris to attend. The money received from Hello! for the interview of the discord he assigned him to the construction of a house for spiritual exercises in Iona. Despite her anger, Diana has kept her as the manager of her estate, and the primary referent for the education of her children.

Frances then locked herself up even more in anonymous volunteering on her Scottish island. Taking advantage of one of her few trips, in 2002, thieves stormed her home and stole valuables.

Frances died on June 3, 2004, and of the royal family only her grandchildren, William and Harry, attended the Catholic funeral held in Oban Cathedral. Who accompanied her in recent years, the local Catholic community, speaks of his religious devotion and his profound spirituality. And also of his love for his daughter Diana.

The Catholic ties of Princess Diana