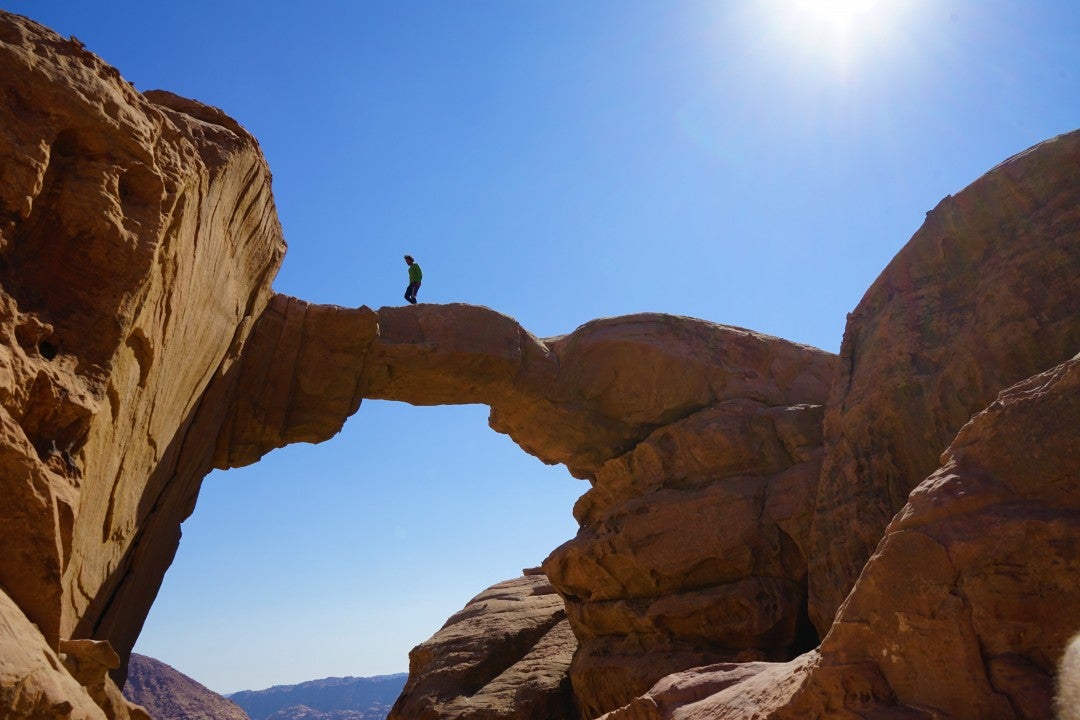 Jordan Trail is a monumental trek that stands out for its incredible historical value and for its doses of spirituality, connecting Petra, the Wadi Rum desert and the Red Sea.

The reddish valleys and cliffs hide the remains of ancient civilizations that settled in this sacred territory. A changing territory, where the desert gives way to wadi (river channel) and the Jebel (summit) to the savannah, and where borders are more important than anywhere else. We look for the Jordan river valley like a crack in the heart of the Middle East that connects Jordan from north to south to give the traveler the country’s palette of landscapes while discovering the history and culture of this strategic enclave. For thousands of years, this was an important trade corridor of Moabites, Edomites and Ammonites, that the Nabataeans They expanded through Asia and the Romans tried to dominate in their desire to conquer this area.

They call him the Camino de Santiago Middle East for its historical value and for its spirituality. But if we talk about wild nature, few routes available to anyone can rival the Jordan Trail. We discover the most spectacular scenarios in the east trekking monumental by Jordan.

What is the Jordan Trail?

First of all, a challenge. EITHER 650 km of crossing on foot that separate Umm Qais, in the extreme north, to Aqaba, the Red Sea port. The route began to be promoted in 2015, when the Jordan Trail Association recovered this route reserved for the most experienced hikers who dare with 40 days of walking through a wild and virgin environment in many sections.

The prize is to discover eight different regions of the country in addition to its main historical landmarks where the lost city of Petra could not be missing. In addition, in each of these eight stages in which the Jordan Trail is distributed, lasting four or five days each, the walker will discover 52 towns and cities to get closer to the Jordanian society, to taste its gastronomy and sleep in the middle of the savannah or the desert. We explore this open-air museum only suitable for adventurers.

The first stage takes us to the northern end of the country. Many will think that they are not in the Jordan Valley when they find this fertile and green landscape. From the town of Umm Qais to Ajloun, the path crosses canyons trapped between hills full of olive trees and oak forests where the Roman ruins of the Decapolis are hidden in Um Qais and Pella, the Byzantine ruins of the Tel Mar Elias monastery and the medieval remains of Ajloun castle, located on top of the mountain. This enclave puts the finishing touch to the first stage of this route, after 80 kilometers and eight days of walking, getting to know the villages of al-Aaiun and stopping at the Wadi Ziglab eco-park.

From the town of Burma to the city of Salt, the trail crosses agricultural valleyss that flow into the King Talal dam, the main body of water in this area, surrounded by a wooded coastline. Still heading south, we continue through farmland to the Christian-Muslim town of Rmemeen. In this mestizo town, the ascent from the valley begins to reach the city of Salt and thus complete 4 days and a stage of 62.4 kilometers.

As we descend to the Jordan River Valley, we notice that the leafy areas are giving way to a climate and more arid landscape. We discovered this walking from the city of Salt, passing through enclaves such as the Iraq Al-Ameer old palace and following the panoramic King Hussein’s Rally Road until reaching the canyon carved by the course of the Jordan. With views of the Dead Sea, we follow the path that dominates the plateau where the sun hits hard and where several Bedouin camps appear scattered in this landscape.

The Jordan Trail joins the old Roman road here to guide us to the Machaeron’s fortress (90 BC)but not without first skirting the crest and descending through basalt precipices that give us privileged viewpoints over the Wadi Zarqa Main. However, our course points to another deep canyon, the wadi walawhich announces the end of this third stage of four days and 84 kilometers.

A labyrinth of wadis

We enter the region of the Three Wadis or the great river valleys, dry and desolate for the most part. This is a territory striated with countless canyons and vertical cliffs that we can see from the highlands. The trail gives us a panoramic view of the abyss of wadi hidan Y wadi mujib, before descending from the plateau to cross wadi mujib, known as “Jordan’s Grand Canyon”. We enter this 800-meter-deep crack crossed by the river that irrigates some farmland and camps of the Bedouins, the nomadic tribe that has dominated the Jordan Trail for centuries. 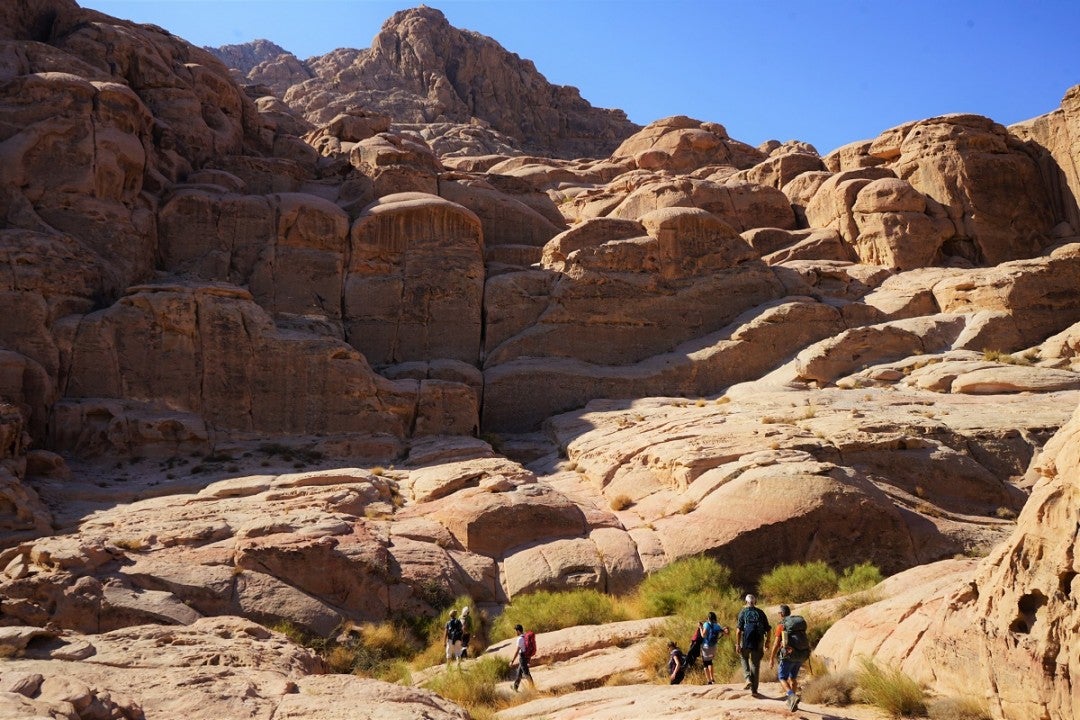 Among so much wild nature there is also room for the archaeological. In this path appear the Ruins of Magdelina, on the edge of Wadi ibn Hammad. And in a combination of going up and down the slopes we discover the main vestige of this stage, located at the top of Wadi ez Zaiyatin and on the hill. The ruins of the Crusader castle of Al-Karak are the best vantage point to contemplate this entire rugged area of wadis and hills, and the final touch to this journey of 4 days and 75 kilometers.

The Jordan Trail leads us from the Al-Karak mountain to the villages of Shehabieh and Khirbet Ainun, a ghost town located above a valley, until we reach Al-Iraq, between olive groves. The trail crosses another hill before coming out onto the impressive wadi hasawhich draws a thousand-meter-deep cleft on this plain located south of the Dead Sea. Of wadi in wadi and from the top of the cliff to the base, we arrive at the villages near Tafileh and then take a historical break at the Edomite ruins of Sela and Mi’tan.

After conquering this stretch of four days and 83 kilometers, we still have a wadi to explore, the Labun, before reaching the restored village of Dana. We will stay here in the Feynan Eco Lodgea sustainable resort located in the middle of this 308 km2 nature reserve.

First the hills and wooded valleys, then the canyons or wadis and now the steppe plain to Petra. We start at Dana. In the reservation archaeological remains of the first human settlements are preserved (9,600 BC), in addition to the main copper exploitation of the ancient world.

“We will travel the Namala road that follows the ancient migration path of the Bedouins and Nabataeans to Al-Batra (Petra)”, explains Abed el Rahim, our guide on this part of the Jordan Trail. In the savannah, dromedaries graze under the acacia trees, while in the Wadi Araba desert, Bedouin tents are camouflaged among the reddish dunes, and in the sun-tortured basalt moors they announce arrival in the mountains of Sharah. Inside this sandstone massif, one of the wonders of the world is hidden.

We discover Petra against the current, or out your back door, following the Petra Back Trail. This starts from Siq al-Barid, an old caravanserai built by the Nabataeans, and continues along the contour of the cliffs until it reaches the façade of the monastery. Fifty meters of height of a facade chiseled on the sandstone rock shows the ability of this Arab people to dominate the Greco-Latin rules and integrate them into this landscape.

To discover the first gift of petra, we have walked for 11 kilometers and more than three hours alone and now we will go against the herds of tourists along the stepped path of the Siq canyon. This protects Petra from the invader since its foundation in the 6th century, where today the Great Temple, the Colonnade and the majestic royal tombs among other vestiges of that time.

Nevertheless, Petra has a treasure and that one hides at the end of the gorge, with wavy walls and scarlet colors. Suddenly one of the wonders of the world appears, known precisely as “the Treasure”. In Jordan’s most emblematic monument, the classical and the Nabataean come together in this elegant sandstone façade, where Hellenistic friezes, columns and sculptures seem to spring from the mountain that today protects the Bedouin people. The sixth stage of the adventure ends after five days and more than 90 kilometers of hiking.

Jordan’s largest desert is a labyrinth of endless reddish sand, where gigantic rocks (jebal) erupt, which delight climbing lovers. Wadi Rum is known as Valley of the moon, It must be the closest thing to Mars on our planet. No wonder this movie was shot here, The Martianamong many.

We dare with this journey through the desert of almost a week, ideal for stargazing at night, for self-knowledge during the day and to sleep in the middle of nowhere in one of the tents that are distributed in the sandy immensity. . The Wadi Rum gives the traveler the possibility of feeling the most absolute solitude and for this reason it is one of those natural environments that must be visited once in a lifetime. We have done it after 5 days of 90 kilometers of good walking.

The final stage is the longest and crosses the desert in six days and 112 kilometers until reaching the Red Sea. The Jordan Trail passes under the mighty cliffs of Jebel Rum and Jebel Um Ishrin, winding through the sandstone mountains of Wadi Rum. Head west through Wadi Waraaqa, passing a series of cisterns that dot the route to the Bedouin village of Titen. We follow an ancient shepherd’s path that reveals, at last, the sight of the Red Sea, the Gulf of Aqaba and the Sinai mountains in the distance.

The warm and transparent waters of this sea full of corals make it a spot privileged to encourage yourself with diving or snorkeling. or just for relax on the beaches that adorn this border coastline after overcoming a true forty-day odyssey through a country where history, culture and archeology merge into an unforgiving landscape.

The Camino de Santiago in the Middle East