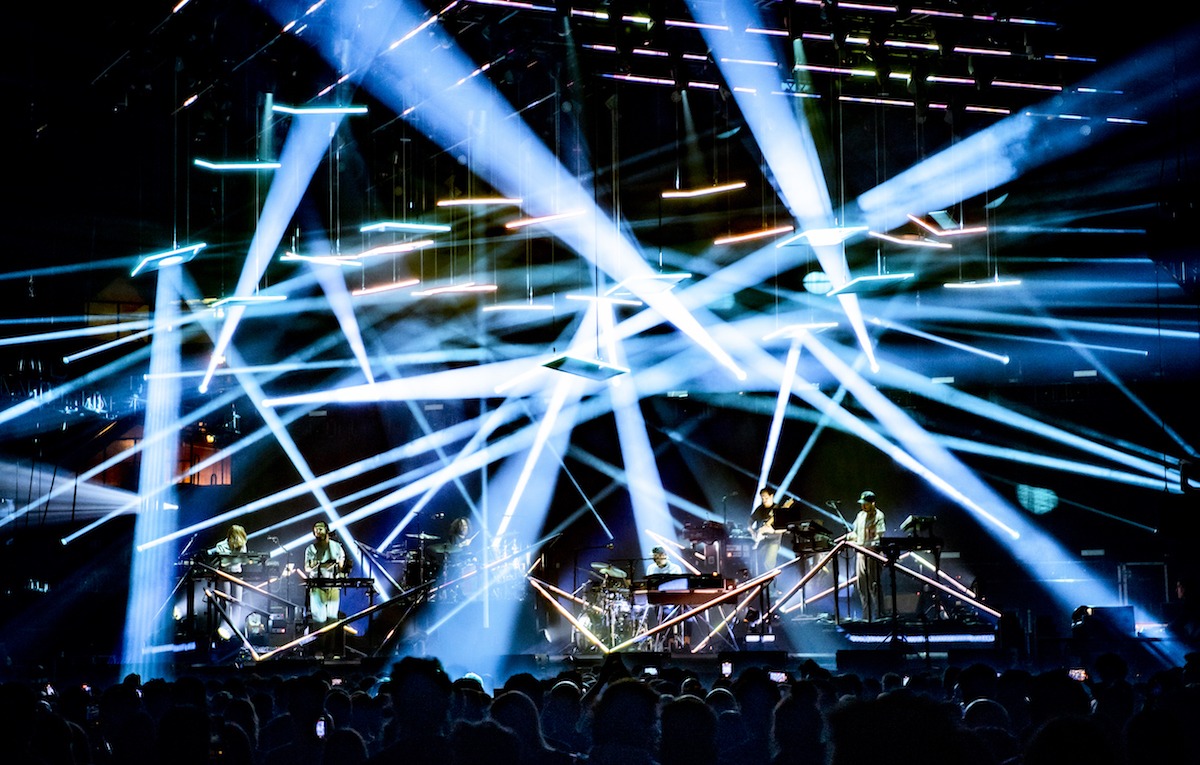 Each of us is many different people: in my case, an aspiring musician, one who writes about music, a fan of concerts and instruments, but also a human being with strengths and weaknesses, loves, friendships, memories and worries. And last but not least, a longtime fan of Justin Vernon’s band. Yesterday, at the Assago Forum, all these people inexplicably aligned themselves for the first time, finding themselves in agreement in declaring that they had witnessed a miracle: the concert of Bon Iver.

On any Saturday in November, six flawless multi-instrumentalists presented themselves on the stage of the Forum, each of whom managed at least three different instruments, in addition to their own voice. Among the instruments: samplers, saxophones, synthesizers of all kinds, vocoders and other toys for voice, as well as obviously guitars, pianos, basses and drums (in the plural, because there were two drummers). In all likelihood, no sounds, no samples, no voices were programmed to base. Those who know in particular the last two Bon Iver records (22, A Million And i, i) try to imagine what it means to play them entirely live, managing every single sound live. It is a titanic job, which requires a strong preparation, dedication and mental elasticity.

Not enough, many of the songs have been rearranged for the occasion: in some cases they have simply been reinforced to adapt them to the live context, in others they have betrayed a typical approach of jams in the rehearsal room. A striking example is the work done on Salemadapted from i, i, in which the musicians, after the performance of the piece in a version quite faithful to the original, gradually allowed themselves to be transported into an instrumental coda which, from round to round, seemed to resemble more and more like something that could be placed by the parts of Dire Straits, with Vernon who launched into an improvised guitar solo of over a minute: most likely during the rehearsals of the tour it happened that the musicians, for fun, decided to continue playing even after the song was finished, finding themselves between hands a tail designed primarily for the pleasure of being played. And for the pleasure of the audience to listen to it, because divertissements like this help to lighten the impeccability of the show.

The six artists on stage, in each song, managed to blend and lighten the surgical precision of the execution with a blanket of warmth, naturalness and humanity capable of empathizing with the emotional sphere of the audience. An emotionally satisfying experience: there is to cry and be ecstatic. We cry privately, hug the neighbors and, at the same time, remain enraptured by the harmony of extravagant sounds, distensions, openings and explosions that intertwine and chase each other during the almost two hours of the show.

Furthermore, the lineup was not designed with particular objectives, but is not responsible for the task of creating some kind of macro-structural dynamics, so much so that it does not take too much into account the typical mechanisms of fan-serviceif we exclude the inevitability of the execution of Skinny Love, Holocene And Blood Bank, classics of the more traditionally indie folk rock period by Justin Vermon who consecrated him first and foremost as a songwriter, before his most revolutionary and experimental phase. The concert was a continuous stream, starting with 22 (OVER S∞∞N)the opening of 22, A Million and finished two hours later with RABiconcluding song by i, i in a symbolic sound path that mainly focused on these last two discs of the project.

I have often wondered about the expression “an end in itself”, always struggling to understand how we came to consider this concept as something negative: being an end in itself actually means that the ultimate goal of existence of a thing is the very fact that it exists. It is a form of self-sufficiency and self-exegesis. If there is God, for example, it is certainly an end in itself. Not being familiar with theology, however, I will limit myself to saying that the Bon Iver concert was a good excuse to try to rehabilitate this expression. The concert was – in itself – an end in itself: it explained itself, motivated itself and showed its meaning constantly in autonomy, step by step. The interaction with the audience by the band was in fact limited to the initial greeting, the pre-encore bow and the final thanks. The only unsung phrase to come out of Justin Vernon’s mouth was a simple one: “Thank you, spread love.”

No interaction other than the alchemy and spirituality that united those present and the six musicians on stage. More than spectators, followers; more than musicians, priests. If I think back to the lineup, however, I realize that my expectations have been completely disappointed: in the three years spent in possession of the ticket I have imagined thousands of times the moment in which I would have heard live 29 #STRAFFORD APTS And 715 CREEKS, the two songs I have listened to the most since I met Bon Iver. They didn’t play one or the other, but the experience was so intense that I only realized it after the concert was over.

Of course, like all earthly miracles, this show also had some flaws, I am thinking for example of the use of lights that are sometimes too aggressive and, at times, trite in suggestions. Another unexpected problem is instead closely linked to the Bon Iver songs themselves, especially those of the last two discs, which are not very easy to memorize, especially as regards pauses, silences and cuts. On some occasions the public has perhaps misinterpreted the moments, throwing ovations in inappropriate contexts, with a particular obsession for the a cappella moments in which in reality the beauty of the six intertwined voices could be appreciated to the fullest.

However, the Bon Iver concert remains a miracle. It was for stratification, dedication, spirituality, talent, and for the extraordinary ability to amaze and move to the point of hurting. Not even these little critical notes are able to take the shine off the miracle: it might be over soon, but meanwhile we’re here, and life is meant to be filled with experiences like this.