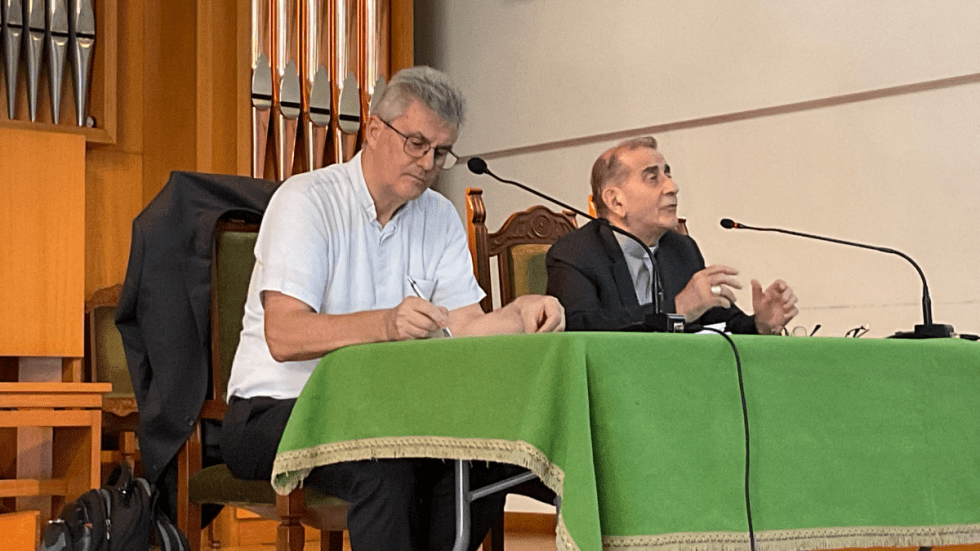 A service that has the value of a grace for the Church: so Monsignor Delpini in the reflection held at the diocesan assembly which celebrated the 35th anniversary of the start of the institute in the Diocese

On November 12, the eve of the first Sunday of Ambrosian Advent, the permanent deacons will experience a day of formation with all the Lombard dioceses at the Spirituality Center of the Sanctuary of Caravaggio, through a report by Don Cesare Pagazzi, head of the permanent diaconate of the Diocese of Lodi and, then, with a confrontation with several voices.

An annual diocesan assembly, which in 2022 is tinged with particular significance for the 35th anniversary of the start of the permanent diaconate in the Diocese, so much so that the wives of deacons are also invited to dialogue with the Archbishop. So more than a hundred people gather in the “Carlo Maggiolini” Auditorium in Rho, and then for the Eucharistic celebration presided over by Monsignor Delpini in the Sanctuary of the Blessed Virgin of Sorrows.

The decree of March 1987 marked the resumption, in our Church, of the institution of the permanent diaconate (very ancient, with a peak in the fourth century), announced during the great conference “Farsi Vicino” by Cardinal Carlo Maria Martini. In 1990 the first six ordained, for a reality that today has 152 permanent deacons, of which 82% are married, mostly engaged in school, hospital care, parish pastoral care and charity. Five candidates this year, who will be ordained in the Cathedral on November 5, and eight aspirants who began their journey just two days ago, again in the Cathedral, with the rite of admission.

The introduction by Don Como

Introducing the work of the assembly – present the Vicar General, Monsignor Franco Agnesi, some Vicars of the Area and the Provost of Rho, Fr Gianluigi Frova – is Fr Giuseppe Como, in charge of Formation for the Permanent Diaconate. 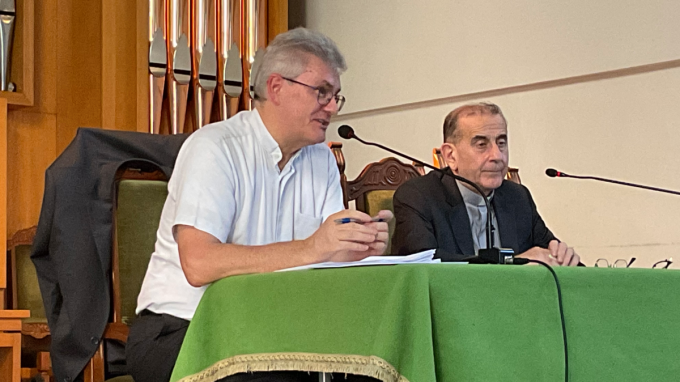 The introduction by Don Giuseppe Como

Recalling the process of rereading various preparatory documents from 1983-84, which were examined in depth last May by the deacons – such as that of the Presbyteral Council which discussed the proposal or one of Monsignor Luigi Serenthà -, Don Como observes: “The Diaconate is represented by a mission and pastoral vocation, it is not a reduction to a liturgical embellishment or a superior form of voluntary service. We must be aware of this and this must be recognized by the priests. Deacons declare that they love the Church so much that they put themselves at the service of it, perhaps even to improve it. They are close to those who are far away by expressing a task of evangelization with their hidden but effective presence, and by bringing closer those who are outside the ecclesial enclosure. The Ambrosian deacons perceive themselves as men of communion and listening, for a charitable, missionary and communion service, as is evident in those who are involved in the Barnabas Groups ”.

In short, a 360-degree spirituality, even if there is no lack of critical issues and problematic points, such as the balance between diaconal responsibilities and family and professional ones.

From the questions about what the permanent diaconate means in the personal life of each person “as a gift for the Church” – interpreting the grace and discomfort, sometimes, of being a deacon – the reflection of the Archbishop begins: “We use the expressions: “May the Church propose, give us answers”, but we are the Church “, he immediately underlines, pointing out a precise challenge:” What gifts have we received, what paths have we taken in these 35 years? “.

The Rho Auditorium is packed

«It is necessary to interpret grace. There are the documents, the evaluation of people, the changes in the Church, with macroscopic changes due to the estrangement of some age groups and the aging of others. The diaconate is a grace for the Church, because it helps to understand what the identity of the ordained ministry does, in the degree of both the presbyterate and the diaconate. It is a belonging for collaboration to the Bishop and its condition is communion which is a grace that the Spirit gives to this Church, thus giving evidence that the ordained minister is not a hierarchy of tasks – one subordinate to the other – but a diversity of complementary commitments that are defined in communion. Deacons understand better what it means to be, because there are priests and presbyters, they understand better who they are because there are deacons. Collaboration with the Bishop is varied ». A wealth that, according to Monsignor Delpini, “has revealed itself more clearly where the destination has not been to be a collaborator of a parish priest”.

Then a second grace, which the permanent diaconate represents for the Church: “Serving her – Pope Francis in the Cathedral, on March 25, 2017, used the happy expression,” guardians of service in the Church “- so that the deacon makes visible the link between the altar and the square “.

The contribution to synodality and prayer

In this context, the theme of how diaconal ordination intervenes in family and civil life is obvious. «The family and professional figure of the adult man who is ordained makes possible that capillarity of the presence of the Ministry which becomes a sign of the Gospel in everyday life. The chronic hesitation of Christian communities to take charge of evangelization can be found in the deacon, in particular in the contribution to be made to the Barnabas Groups – of which many of them were also moderators – and to the dean synodal assembly a tenacious promoter of that exercise of discernment and initiative which is needed to interpret the territory, to imagine and implement proposals that are outside the ecclesiastical precincts at the service of the “Church of the Gentiles” and of the debt of the Gospel towards all ».

The Archbishop during his speech

If anything, “it will be necessary to ask ourselves how to carry the proclamation in schools, in the pluriform“ Church of the people ”, in hospitals, with a style of evangelization proper to those who believe in the Gospel and are present in daily reality. This theme must see deacons as responsible for activating Christians in ordinariness ». The Archbishop’s words are thus addressed directly to those who take part in the assembly. «You must ask yourselves what contribution the Diaconate has given to your Christian and human maturity. The relationship between adulthood and the diaconate, as a style of service, must also develop and mature family and professional life as a service. This is a further grace ».

Another enriching aspect “is participation in the liturgical life of the community. The deacon prays and can teach to pray, with the necessary promotion of the intra-ecclesial relationship, so that communion is evident. A grace for the Church on the way, outgoing, which evangelizes and a personal grace for those who are deacon ”.

There is also a mention of the inevitable ailments “of not being well identified or valued”. “There is the risk of a sort of authorization for discontent, while malaise should be configured as a challenge, an experience of proclamation that invites conversion, as was the announcement to Mary who says the joy that finds its reason in Lord and a gift that you are about to receive ».

The permanent deacons listening to the Archbishop

In addition, a second announcement, says Monsignor Delpini with the first words of Jesus in the Gospel of Mark: «The time is over. The Kingdom of God is near ”. «Jesus begins his mission in the Galilee of the peoples, for which there is a path of conversion and adherence to the Gospel. Be witnesses of this improbable joy, protagonists of this announcement of the Kingdom that comes where everything could conspire to bewilder the listeners. But the Lord makes all this concrete with the signs he leaves us: charity, service even to the point of martyrdom, communion, being united in the midst of the community ”. What, in fact, is asked today, as a challenge, to the permanent diaconate.

Permanent deacons, for 35 years in the service of the Diocese

The Archbishop to permanent deacons: “Be the visible link between the altar and the square”