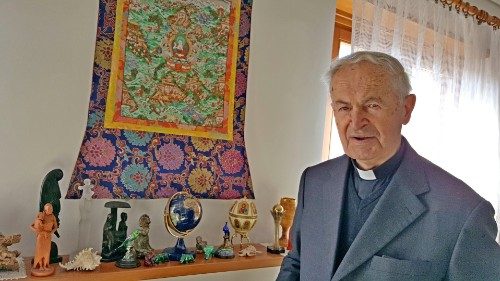 Francis expresses his condolences for the death of the Slovak cardinal, remembering him as a man “supported by profound faith and a far-sighted gaze” who “served the Gospel and the Church with humility and self-denial”

“Appreciated and wise brother”, thus Pope Francis, in the telegram addressed to Bernard Bober, archbishop of Košice, expresses his condolences for the death, at the age of 98, of Cardinal Jozep Tomko, prefect emeritus of the Congregation for Evangelization of Peoples and of the Pontifical Committee for International Eucharistic Congresses, a “mourning that affected the entire ecclesial community and the Slovak nation”.

Tomko died this morning in his apartment in Rome. After being admitted to the Gemelli Polyclinic on 25 June due to an injury to the cervical vertebra, he spent six weeks in the hospital and from Saturday 6 August continued his treatment at home with the assistance of a Vatican nurse. The funeral will take place on 11 August in St. Peter’s Basilica at 11.00, at the Altar of the Cathedra. The burial will take place, after the funeral in Rome, in the Cathedral of St. Elizabeth in Košice, in the archdiocese of the place of birth.

Francis recalls how the cardinal was “supported by profound faith and far-sighted gaze” and how he served “the Gospel and the Church with humility and self-denial”.

“I think with gratitude of his long and fruitful work in the Holy See as a diligent and prudent collaborator of my predecessors. I also think of the prayerful spirit of him who saw him, at an advanced age, remain assiduous at the daily evening recitation of the Rosary in St. Peter’s Square “

Precisely through this Marian prayer, Cardinal Tomko gave pilgrims and tourists – the Pope still remembers in the telegram – a “beautiful and public testimony of love for the Holy Virgin”. Finally, the Pope’s gratitude goes to the Sisters of Mercy of St Vincent de Paul-Satma’rok who – the Pontiff underlines – “looked after him with every care”.

Slovak, he was the oldest cardinal of the College of Cardinals. Theological formation in Bratislava and Rome, at the Pontifical Lateran Athenaeum and at the Pontifical Gregorian University. He had three degrees to his credit: Theology, Canon Law and Social Sciences. Ordained a priest on March 12, 1949, for fifteen years (from 1950 to 1965) he was vice-rector of the Pontifical College of Nepomuk in Rome and of the adjoining boarding school for priests from various countries, including those of mission and Latin America. John Paul II conferred episcopal ordination on him on 15 September 1979. For six years he was secretary general of the Synod of Bishops, giving it considerable impetus and dynamism. In particular, he edited the volume “The Synod of Bishops, nature, method, perspectives”.

Slovak, created cardinal by Saint John Paul II in 1985, he was prefect emeritus of the Congregation for the Evangelization of Peoples and of the Pontifical Committee for Congresses …

Tomko stood out for his commitment in the field of ecumenism. In 1972 he was part of the Holy See’s delegation to the Lutheran World Federation and the World Council of Churches in Geneva. He was also a member of the Catholic-Lutheran-Reformed Joint Commission on the Theology of Marriage. He dedicated himself to the deepening of the problems concerning consecrated life, justice and peace, the laity. He has never failed to carry out direct pastoral ministry in numerous parishes in Rome and in the diocese of Porto-Santa Rufina. He remembers, in the context of his profuse work on a cultural level, the co-foundation of a religious magazine and the Institute of Saints Cyril and Methodius in Rome and various publications on theology and law, history, spirituality.

Leading the Congregation for the Evangelization of Peoples

The conspicuous range of meetings and visits to various countries together with the Synodal Assemblies have allowed the cardinal to acquire a profound knowledge of the reality of many particular Churches, and to experience their effective and affective collegiality. In 1985 he was appointed pro-prefect of the Congregation for the Evangelization of Peoples, then prefect for sixteen years. In the same year he was created a cardinal. He also assumes the title of Grand Chancellor of the Pontifical Urbaniana University. From 2001 to 2007, Cardinal Tomko was president of the Pontifical Committee for International Eucharistic Congresses.

The College of Cardinals

With the disappearance of Tomko, the College of Cardinals is made up of 206 cardinals, of whom 116 are electors and 90 are non-electors. The eldest is now Alexandre do Nascimento, archbishop emeritus of Luanda (Angola), who turned 97 on 1 March last.