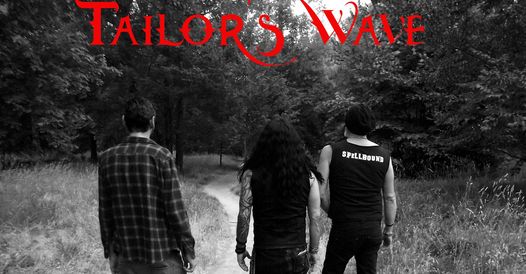 
Truemetal lives thanks to its audience. When you buy something from our links, we could earn a commission. Find out more

We exchanged a few words with Rik Forsenna, vocalist of our Tailor’s Wave, talking about their new album, ‘Alchymja’ and their programs. Below is the result of the interesting chat.

Hi Rik, how are you? First of all, welcome to our pages and thank you for your availability.

Ciao’n’roll Andrea… in the meantime Thanks to you. Let’s say we are very excited about the release of the new work, this is the feeling that breathes in us.

We were born as a musical project in the sign of metal in November 2020 from my meeting with the multi-instrumentalist Samuele Sarti (Thee Outlaw/Thorobred’s) and, during the recording of the first album, Fabio Bucci (Hellblade) to the choirs.

Why ‘Tailor’s wave’, which, if I’m not mistaken, means (or can mean) ‘tailor-made wave’?

It means ‘tailor’s wave‘. It comes from my idea. I put the surname of Samuele in the singular and added ‘Wave‘, which is the name of his recording studio. The sense is that the tailor, in this case, is the musician who creates sound waves that become music. He liked it right away and so i was born Tailor’s Wave.

Two albums in two years, first ‘Embroider’, perhaps a little more exploratory, to test your potential (correct me if I’m wrong), and now ‘Alchymja’, more complete and defined. However, there are not only these differences. What do you tell me? What evolution has there been between the two works?

You are a careful observer, that’s exactly how it went. Everything happened spontaneously and we did not ask ourselves which direction to take, if not to explore and see the thing where it led us. Evolution came as a consequence through the exponential growth between us, who got to know each other artistically by working together and discovering the musical strings of both, in order to express ourselves in a genuine way. This has led us towards a path with clearer and more stimulating contours, to try to have our own recognizable sound, a personal imprint.

You may not believe it but… very little time for both of us. It works like this: Samuele has an idea and in a few hours he records guitar / bass / drums. He mixes everything quickly and sends us the audio file. I write the lyrics and work on the melodic line of the voice, including the choirs. Fabio on the choirs and various phrasing. A few days go by and we set the date to record, coming out with a new piece at the end of the same day. The particular thing is that Samuel does not know absolutely what he will sing but he discovers it in during the moment of the rec. So it is with us. Trust, esteem and respect in the sign of madness … the healthy one.

In the ‘Alchymja’ Booklet you want to specify that all three belong to other bands. What differentiates Tombstone, The Outlaw, Thorobred’s and Hellblade from Tailor’s Wave?

Let’s say that each of our bands has its own different style, the difference is this. Even if in all bands metal is always present, albeit with various shades.

On the FB page of Tailor’s Wave, you explain that the title ‘Alchymja’ is relevant to your cohesion and to the compositional method: Samuele traces the foundations of the music and on these you write the lyrics while Fabio narrations and choirs. How are the topics to be treated chosen and how do you manage to blend Rik’s ideas and thoughts with those of Fabio?

Basically, as you may have noticed, I have already answered you above. I would add, in fact, that among us it is precisely a ‘Alchymja‘which gives the title to the album itself.

Sung in English, but on the CD you will find the texts translated into Italian. Why this choice?

The choice of the texts in Italian is to give immediacy, facilitating those who forward to read them, so that they can immediately know what they are about.

You denounce considerable contemporary social problems, in no uncertain terms, but also give the same importance to inner and spiritual feelings (not in the religious sense of the term). Can we say that your texts are a stimulus to look outside, but also to look inside?

Yes, too, to look outside you have to start from within. The stimulus must be the desire to always improve every day with curiosity, to understand everything that surrounds us in a more conscious way. I usually write the lyrics in minutes, letting what I hear flow instantly.

Who is Wakan Tanka for you and where did the impulse to write a song about the spirituality of the Native Americans (‘Eagle Feather’) come from?

For Wakan Tanka we mean everything that is desire, hope, dream, in something that is presence and lives in every creature that surrounds us, but also in every plant, tree, rock. The impulse to write such a piece was born precisely from the spirituality and wisdom of a wonderful people who were an example of civilization. The title comes from the Indian name I gave myself years ago.

What do you think is the Metal scene in our peninsula? Do you think there is a movement or that everyone, essentially, plays a little on their own?

Regarding the metal scene, there are real bands that beat each other sweating blood, to keep movements alive, and organize lives and festivals in the sign of union and brotherhood and what they get is truly deserved. At the same time, unfortunately, there are also several musicians who only do artistic licking and are opportunistic, competitive, envious, negative. Sad scum that has nothing to do with art.

You are preparing to step onto the stages. Can you anticipate some indiscretions? What kind of show are you preparing? Will you be doing a tour or sparse dates?

The auditions will start in September to make our project a full-fledged live band as soon as possible. For now I can only tell you this.

I know you are looking for musicians to complete the live lineup. How are the auditions going? Is there any name already?

The names will be revealed when the musician who will participate in the audition will become an added value for the Tailor’s Wave.

We close this short interview here and thank the Riks for the time allowed, leaving him the greetings to the readers of TrueMetal.it. Thank you.

Thanks again to you Andrea for the interview. It was really a pleasure, we will hear from you over time when there will be more news. A wild hug.