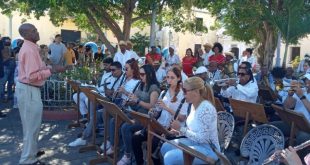 The creativity of the Caribbean City Museum, in harmony with its architectural and heritage wealth, became the leitmotiv of this celebration in its fiftieth edition

The maestro Alfredo Castro in the musical direction of the presentation of two cultural institutions of the city, the Municipal Concert Band and the Trinitarian Tunes. (Photos: Ana Martha Panadés/Escambray).


Trinidad lives these days in a genuinely cultural environment. Trova, boleros and son, tributes and downloads, a meeting with the city, its musicians and guest artists… A week in which squares, parks and cultural institutions were hosts to proposals to indulge the spirit.

The program of activities thought about the diversity of audiences and tastes, for this reason in the Historic Center of the town the musical magazines were dedicated to a particular theme each day and where they highlighted the Romantic Afternoon, dedicated to the third Historian Carlos Joaquín Zerquera and Fernández de Lara, which became a heartfelt tribute to the researcher and promoter of these festivities.

In the square of the former convent of San Francisco de Asís, today the National Museum of the Fight against Bandits, the talent, sensitivity and charisma of the outstanding Trinidadian musician Carlitos Irarragori gave away another memorable evening in which Pedrito González, founder of the Escambray duo and the members of the Danzón Club were applauded for being faithful defenders of our national dance. A potpourri of anthological songs by Los Van Van and a performance by María Victoria Rodríguez sealed with a flourish one of the activities that will remain in the memory of the city.

During this unloading in the open air, the Nueva Trova Fifty Anniversary stamp was delivered to Isabel Béquer (La Profunda), Carlitos Irarragorri, Félix Cintra, Israel Moreno and Pavel Esquerra, all with notable contributions to this movement.

The concert of the Ars Nova Early Music Ensemble, from Santa Clara, in the Municipal Museum of History, was also a luxury concert, another gift that the local public appreciated.

The plastic arts showed once again the mastery of our artists with the inauguration of exhibitions in galleries and museums, among them City Identity, by the renowned Yudit Vidal; Threads in history, by the artisan and doctor Kenia Moscoso, and Cantar las cuarenta, curated by maestro Luis Blanco.

But the proposals reached other city spaces. In the surroundings of Plaza Carrillo, two cultural institutions of the city, the Tonadas Trinitarias and the Municipal Concert Band, articulated their exclusive and harmonious sound. With a musical arrangement and direction by maestro Alfredo Castro, they came together in a perfect coupling of voices, instruments and rhythm.

In this area, the theater groups from the Municipal Performing Arts Center delighted the children’s audience, while other activities with more appeal among young people were concentrated in Plaza 500 and Borrell Street. For the closing of this week of festivities, in which the prices of the gastronomic offers were the discordant note, the performance of national groups is planned.