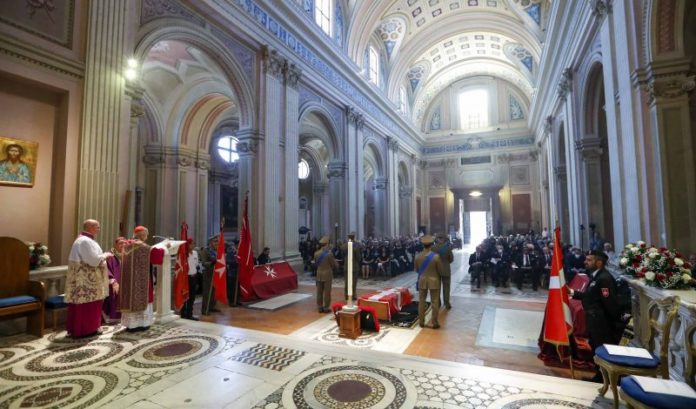 A long procession formed by the knights and ladies of the Order of Malta, by the picket of the Military Corps of the Italian Association and by the volunteers of the Italian Relief Corps, accompanied from the Church of Santa Maria in Aventino, in the complex of the Villa Magistrale, to the ‘adjacent to the Basilica of Saints Bonifacio and Alessio, the coffin – wrapped in the flag of the Order – of Fra’ Marco Luzzago, the Lieutenant of the Grand Master, who suddenly disappeared on 7 June at the age of 71.

The funeral ceremony, in a packed church, was officiated by Cardinal Silvano Maria Tomasi, the Pope’s Special Delegate and concelebrated by Cardinal Giovanni Battista Re, dean of the College of Cardinals and by Monsignor Jean Laffitte, Prelate of the Order of Malta.

In recalling the kindness and sincere goodness of soul of the deceased, his sincere smile and direct gaze, Cardinal Tomasi in his homily highlighted how during his mandate of not even twenty months at the helm of the Order, marked from the pandemic emergency before and from the relief provided following the war in Ukraine. The cardinal recalled in particular his last pilgrimage to Lourdes, Fra ‘Marco had been appreciated for his generosity, spirituality and dedication, mirror of his “luminous Christian witness”, as in the words of Pope Francis.

The funeral was attended by the Interim Lieutenant of the Sovereign Order of Malta Fra ‘Ruy Gonçalo do Valle Peixoto de Villas-Boas, the members of the Sovereign Council, the relatives of Fra’ Marco Luzzago, the representatives of the Grand Priories, Subpriories, National Associations, of the Order of Malta’s diplomatic missions and volunteer corps around the world. Together with them, the Ambassadors of the countries with which the Order maintains diplomatic relations, civil and religious authorities.

The funeral rite was broadcast live on the Order of Malta’s YouTube channel, to allow members and volunteers around the world to follow and participate live at the last farewell for Fra ‘Marco Luzzago. Hundreds of messages of condolence that in these days continue to reach the Grand Magisterium to express condolences for the disappearance of the Lieutenant. Accompanied by family members, the body of Fra ‘Marco Luzzago will reach Brescia tomorrow to be buried in the family tomb.

Immediately after the funeral, in the nearby Church of Santa Maria in Aventino, the newly elected Lieutenant of Grand Master Fra ‘John T. Dunlap took a solemn oath, thus entering the fullness of his powers. Present were Cardinal Silvano Maria Tomasi, Pope Francis’ Special Delegate to the Order of Malta and the members of the Sovereign Council.
After the oath, the Grand Commander Fra ‘Ruy Gonçalo do Valle Peixoto de Villas-Boas imposed the collar on Fra’ John T. Dunlap. At the conclusion of the short ceremony, the state flag of the Sovereign Order of Malta was hoisted on top of the Magistral Villa.

Pope Francis in his letter of appointment affirms that “the sudden departure of the Lieutenant of the Grand Master, Fra ‘Marco Luzzago, a few months after the celebration of the Extraordinary General Chapter, brings the Jerusalem Order to live a new moment of dismay and uncertainty. “. A note then commented on Francesco’s decision to immediately lead the SMOM. This, it says, “will allow the Order of Malta to accelerate the reform process and return to ordinary administration under a Grand Master immediately afterwards. The Order of Malta is grateful to the Holy Father for his fatherly concern ”.

Friar John T. Dunlap was born in Ottawa, Canada, in 1957. After his studies at the University of Nice, he graduated from the University of Ottawa and then obtained the title of Juris Doctor at the University of Western Ontario. . He was awarded an honorary doctorate in Public Service from John Cabot University in Rome.
Friar John Dunlap is an attorney admitted to the New York State Bar and a barrister and solicitor of the Ontario Province Bar. He joined the New York law firm Dunnington, Bartholow & Miller in 1986 and became a partner in 1993. He specializes in corporate and immigration law. An internationally respected lawyer, since 1997 he has been legal advisor to the Permanent Observer Mission of the Holy See to the United Nations.
Admitted to the Order of Malta in 1996, he made his temporary vows as Knight of Justice in 2004. In 2006 he was elected first Regent (religious superior), of the Subpriory of Our Lady of Lourdes based in New York. On June 7, 2008, the first American member, he took solemn vows.
In 2009 Dunlap was elected for a five-year term as a member of the Sovereign Council. He was re-elected for another five years by the General Chapter – the elective body of the Order – in 2014 and 2019. 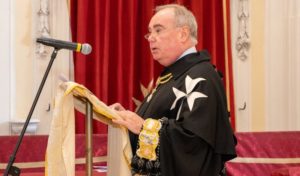 SMOM. The oath of the new interim Lieutenant immediately after the very popular funeral in Luzzago – FarodiRoma

September, fresh air: 3 things to learn (and put into practice) from the best yoga retreats
“The Mission Congress is an experience of synodality”
The Pope, after the NATO summit: "Peace is not built on the balance of arms or on reciprocal fear"
Tweet
Share
Share
Pin