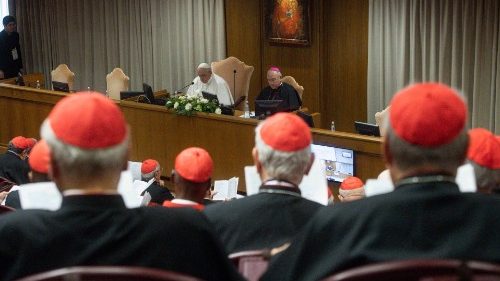 The second day of the session of meetings between Pope Francis and the cardinals, focusing on the Apostolic Constitution Praedicate Evangelium, is being held on Tuesday, August 30, 2022. The meeting will conclude at the end of the afternoon with a mass in the presence of the Holy Father , in St. Peter’s Basilica in Rome.

The formation of personnel, the spirituality of the Curia and the question of the laity and their possible role at the top of certain dicasteries: these were the themes on which the reflections and discussions of the cardinals focused. The closed-door event will come to an end this Tuesday, with a mass presided at 5:30 p.m. by Pope Francis in Saint Peter’s Basilica.

The two-day meeting of cardinals with Pope Francis, from August 29 to 30, 2022, opens a fundamental reflection on the principles announced in the apostolic constitution …

Place of the laity in the governance of the Church

The place of lay Catholics in the roles of governance of the Church, a theme that emerged during this second day of the meeting of cardinals, was one of the major subjects of the Constitution Praedicate Evangelium. Point 10 of the document – ​​published on March 19 and entered into force on June 5 – stipulates that: “Every Christian, by virtue of his baptism, is a disciple-missionary insofar as he has encountered the love of God in Christ Jesus. This cannot be ignored in the update of the Curia, whose reform must therefore include the involvement of the laity, also in roles of governance and responsibility”.

This question had already been addressed for the first time during the press conference presenting Praedicate Evangelum, on March 21. Some speakers, including the newly appointed Cardinal Gianfranco Ghirlanda, had stressed that there was “dicasteries at the head of which it was appropriate to have lay people”. Thus the Dicastery for the Laity, Family and Life which, according to the canonist, encompasses areas that the laity “live” and on which “they have experience”.

Two days of meetings behind closed doors are being held this Monday August 29 and Tuesday August 30 between the cardinals of the whole world, in the hall of the synod, to deepen the aspects of the Praedicate …

In the case of the courts, “the Constitution does not abrogate the code of canon law which establishes that in questions which concern clerics, it is the clerics who judge. The Church remains with a hierarchy. We do not abolish the function of a priest or a bishop, it depends on the different situations”, he had indicated. This point in particular, which has emerged during the work of recent days, will have to be the subject of additional studies requested by the cardinals.

Cardinal Paolo Lojudice, Archbishop of Siena in Italy, testifies for his part to the richness of the work carried out in groups: “It is easier to confront and dialogue when working in small groups (…). Some of [nos] ideas were thus pooled”. The intervention of one or other of the cardinals thus helps “to the understanding of certain less clear, less obvious elements, in particular that which concerns the presence of lay people even in the functions of the dicasteries.”

Cardinal Lojudice finally emphasizes the “excellent atmosphere” reigning inside the new hall of the Synod. These exchanges on Praedicate Evangelium, he describes, are experienced as a starting point: “Time is necessarily long to make a reform. The Pope is concerned about it and has been concerned about it from the start, it is one of the main points of the pontificate. I believe that sooner or later we will come to a realization, where the offices of the Curia themselves will be experienced as a mission”.

First published in Italian on March 19, the new apostolic constitution Praedicate Evangelium is now available in French and Polish.

Second day of meeting between the Pope and the cardinals, the laity at the center – Vatican News