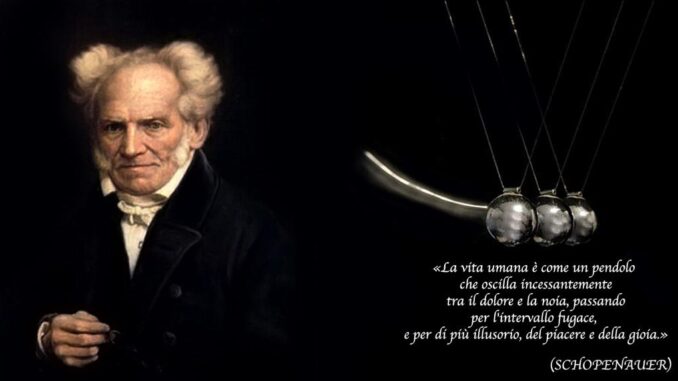 The figure of Schopenauer represents a strong antithesis to Hegelian thought.

Schopenauer’s philosophy represents a strong critique of Hegel’s philosophy; at its base, in fact, there is the conviction that the founding principle of reality is something rational: the will.

Schopenauer was born in Gdansk, Poland, in 1788 into a middle-class family: his father was a banker and his mother was a writer.

His figure is a synthesis of various philosophies: that of Plato, Kant, the Enlightenment, Romanticism, Idealism and finally Indian spirituality.

He takes up the concept of love for the theory of ideas, opposing contingency and contrasting the perfect world and the ephemeral one.

For the construction of objects, subjects are needed. Randomness is illusory, ephemeral.

The noumenon does not exist, or rather, the noumenon is hidden: I remove the veil that hides my own body, which I can feel and represent.

I see my body from the outside and I feel it as a will, as well as living it from the inside.

Consequently, the body can be considered as the key to access the truth because it puts me in contact with it: it makes me understand that within things there is this truth, which can be grasped by turning in on yourself, feeling that your body (object among other objects) is the metaphysical principle of being will (to love, to eat, to live).

In reality, the man he loves is convinced that he is free, but marriage becomes an expression of the will to live (x + y = xy).

If we do not admit the constitutive principle of the will and which is the basis of life, then it means that man is required to desire: all this relegates man to a state of suffering, as he himself is, to all effects, a will: he desires everything he does not have and it is precisely this constant dissatisfaction that makes him unhappy.

The pessimistic vision of life arises precisely from this tension that dwells in man. Man’s life is a continuous wanting for what he does not have and when he has it this tension stops and boredom takes over, until a new desire is born.

Hence Schopenauer’s statement: “life is a pendulum that swings between pain and boredom”: it is pain because there is happiness, but it lasts just a moment.

There is therefore an unsolvable pessimism, because when the will is canceled, life itself is automatically canceled.

However, for the German philosopher there are three ways to relieve pain: Art, ethics and unwillingness.

– The art: an example in this sense can be represented by music: capable of dematerializing and arousing positive feelings in man that in that moment relieve the pain. Music is the highest form of art as far as this consolation is concerned because it allows man to temporarily distance himself from pain, allowing him to estrange himself from the world of things, from representations. In this regard, it is right to make an observation: how many times do we find consolation even in tragic music? well, with its notes, it brings us closer to the tragic conditions of other people, making us feel less alone and unfortunate, restoring a sort of empathy. This way is individual;

– Ethics: the second way, that of ethics, is no longer individual and is divided into two ways: justice (mine and that of others) and compassion. In fact, these two stages allow the individual to get out of his condition of selfishness. In justice, in fact, one’s rights and those of others are recognized. In compassion, on the other hand, others open up to us;

– Non-will (canceling oneself as will): for Schopenauer it is necessary to make non-will triumph through ascesis, which makes man able to devote himself to the spirituality of his own body, not to be a slave to material relationships (ignoring and governing them). In this context, the philosopher refers to nirvana (deriving from Indian philosophies). Ultimately, ascesis is equivalent to eradicating one’s desire to exist, to enjoy and to want. Consequently, it is equivalent to living the life of an ascetic.