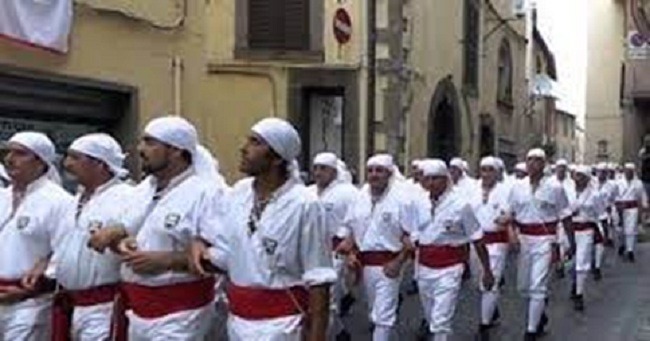 Our interview with the mayor of Viterbo Chiara Frontini

NewTuscia – VITERBO – The wait for the Transport of Santa Rosa grows, starting with the costumed procession that leads the heart of the Saint through the streets of the city today, Friday 2 September.

The Porters, as Massimo Mecarini testifies, are ready to face the efforts of transport this year extended by 700 meters on Viale Marconi with physical and spiritual participation and enthusiasm. The city of Viterbo and the people of Viterbo will experience the feast of the patron saint Rosa this year, regaining possession of the enthralling sensations of carrying “Gloria”.

In the transmission Facts and Comments aired from Saturday on the screens of Teleorte and already visible on www.Teleorte.it And www.newtuscia.it Web Tv we interviewed the mayor of Viterbo, Chiara Frontini a few hours from the Santa Rosa Car Transport. Below is the link even if the interview https://youtu.be/nupCYlMRmL4.

We will also deliver on www.newtuscia.it at 9 pm tomorrow 3 September the live transport and starting at 6 pm the preparations on the Facebook page.

The transport of the Car of Santa Rosa, in addition to being a profound event of religious inspiration, appears as a “dream of faith” lived collectively and so intensely as to arouse deep unique emotions and enthusiastic judgments by the thousands of Viterbo residents and scattered guests along the way.

The resumption of Transport after two years of forced interruption will emotionally involve, in addition to the organizers, the Porters in particular, we too are committed to telling this event, and all those who are animated by “a single feeling” feel fully involved in the evening of 3 September, in the gestures, in the emotions and in the inner and emotional participation, which most of all characterizes Viterbo and its religious and civil values ​​of aggregating and supportive citizenship.

It will be the last year for the creation of Raffaele Ascenzi and the first experience for the new mayor, Chiara Frontini, who has repeatedly thanked the builder Vincenzo Fiorillo, the creator Raffaele Ascenzi and the president of the Sodalizio dei Facchini di Santa Rosa. , Massimo Mecarini and, through him, every porter who is preparing to face the fatigue of transport at the invitation of the Chief Porter Sandro Rossi: “Are you all of a feeling?” and “Lift and stop!”. The effort of driving the car of 51 quintals and 34 kilograms will be shared by the porters and by the numerous Viterbo people and tourists.

In these days of the Feast of the City, in particular on the occasion of the transport of the “Glory” of Rosa, as an extraordinary prelude to Beauty and Spirituality, we will try to capture the “collective feeling” of the deep bond of Viterbo with its young Saint, taking to I loan the pages of poetry dedicated by Cesare Iacoponi to the girl Rosa.

Viterbo, in the circle of its walls and with its over one hundred crenellated towers “ferrigna corte di peperino which hosted 32 Popes and three Emperors”, must also represent today, recovering the urban decor that belongs to it, the “shell of art and d ‘love “that contains the pearl of great devotion to the” shining “Rosa: the heroic young girl, the seraphic flower who, thanks to her fragility, was able to face the” heroic daughter of the people “the tyrant Svevo and the road to exile, with the misunderstandings related to his dedication to the needy, without ever losing, indeed witnessing his Faith with greater vigor.

Finally tomorrow, September 3, the agile “shining spire ”brought by the Porters, Knights of Rose through the streets of the city, will come back to be “moment of joy ed‘apprehension” for the people of Viterbo and in “stranger” will arouse “wonder and emotion “.

In fact, the style conferred by Raffaele Ascenzi on “Gloria” recalls the spiritual contents and aesthetic lines of the Gothic style, arousing admiration for its verticalism, which with a skilful upward motion, stands out among the city towers, with its flexing forms, they curve through the arches, the cusps and the spiers that rise light as the angels depicted and sharp upwards, towards the statue of Rosa.

The wise placement of the living flames revives the elegant lines that recall the stone jets of the splendid Gothic cathedrals and the highly refined goldsmith works of the Monstrances and Reliquaries.

A particular thought can only turn back to the Porters of Santa Rosa, with the wish to always be “of a feeling” also for this renewed Transport of 2022 and to all those who contribute in various ways to the Event, however true and genuine will be able to offer anew, with the sincere testimony of the incomparable bond of Faith, of Fraternal Testimony and Art that binds them, and binds us, indissolubly to the young Rose.