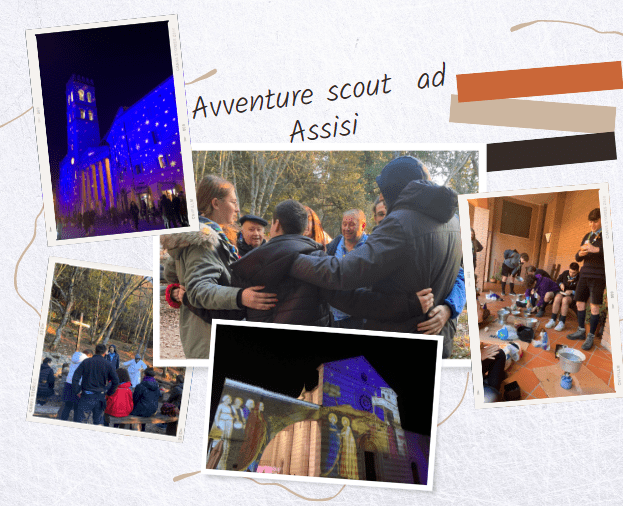 Franciscan and scout spirituality have always been in dialogue: for this reason, for some years now, the Franciscans of Assisi have been proposing retreats for leaders and boys of the various scout associations to live together with Franciscan friars and nuns. The meetings take place in Assisi, near the Basilica of Santa Maria degli Angeli and usually only occupy part of the day, so that each clan/fire/novitiate can organize their own activities.

Below is the experience recounted by the scouts of San Salvo.

From 27 to 29 December we of the Clan Talitakum of San Salvo went to Assisi to participate in the Christmas Francescout (Home – Francescout). The theme of life was at the center of our activities allowing us to deepen the “chapter” we are analyzing.

On the first day, as soon as we arrived, we met all the other groups present at the event. After a short break one of the organizers introduced the central theme and explained the various stages from conception to birth. In particular, he focused on abortion expressing his opinions supported by various statistics and scientific information. For us it was very interesting and we discovered things that we didn’t know about. In the afternoon of the first day we then went on a tour of the city following a defined itinerary, breathing in the Franciscan atmosphere that pervades the village. This has allowed us both to reflect on ourselves, on how we see ourselves and on our insecurities through moments of “desert”; and to visit the places that were very important in the life of St. Francis. It was a very stimulating activity which invited us to confront our fears and come to terms with who we really are by reflecting on our strengths and weaknesses. In the evening we then exposed our reflections in the circle, experiencing a moment of sharing.

On the second day, in the morning we listened to some Franciscan friars who told us about their experiences on their missions in various parts of the world. We then continued the discussion begun the previous day. In the afternoon we walked to the hermitage of San Francesco and once we arrived in this suggestive place we animated the vigil, whose theme was “the crib in our day” in which each patrol played a character of the crib of their choice using different methods . Once back we had a very interesting discussion with the friar who had spoken about abortion the previous day. The day ended with a vigil organized by the friars and nuns in the church of Santa Maria degli Angeli, and whoever wanted could take advantage of the indulgence under the conditions requested by the church. At the end of the vigil there was the signing of the clan card.

On the third and last day, in the morning we listened to some testimonies on the subject of abortion and immediately left again. This experience has been very useful because it has presented us with different points of view that perhaps we would never have considered and we have learned not to always take for granted what we are told. The community climate has allowed each of us to express their opinion freely and without feeling judged.

The Moroccan blue city of Chefchaouen is a daydream
Elections in Brazil: The return of Lula or the right to power
A history of family business spanning over a century: who are the masters of wood, the excellence of...
Tweet
Share
Share
Pin