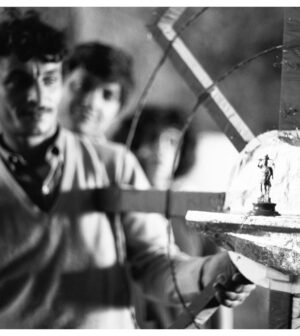 A place of high spirituality is the cave dedicated to the archangel in Olevano sul Tusciano, among the faithful in procession, brigands and Lucifer evicted with a kick

The Grotta di S. Michele Arcangelo, in Olevano sul Tusciano is a highly symbolic place, where ancient and contemporary paths cross which enrich its interest: from that of the waters that originated and modeled it to those of pilgrims, faithful in procession, brigands and hikers. The cavity opens on the left side of the Tusciano River valley, at 615 m above sea level, in the midst of high limestone walls. It is a large cavern originating from the water in Monte Raione (also called S. Elmo, corruption of Santo Eremo) which reaches the maximum width of 50 m and the maximum height of 40 m, and after about 200 m is interrupted by a ancient landslide. At about half of its extension it communicates, through a narrow passage, with the Grotta di Nardantuno, or Leonardo Antonio, a brigand who used to take refuge there with his band, taking advantage of some sheep tracks. The numerous prehistoric artifacts found show that in the distant past this cavity was easily accessible from the outside, while now it opens onto an isolated natural terrace overlooking the valley. The Grotta di San Michele, on the other hand, can be reached by leaving the car in Ariano, near the Enel hydroelectric plant, from which you proceed along the Tusciano river and then up the valley on a mule track along which, halfway up the coast, there is the Cell of S. Vincenzo, a small convent whose existence is attested starting from the 9th century. The dedication of the site testifies to a link with S. Vincenzo al Volturno. Nearby, on a rock located lower than the path, you can see the “ciampa del diavolo”, probably a natural round basin, formed by the corrosion of the limestone by the water acidified by carbon dioxide, the same phenomenon which, on a larger scale, determines the formation of caves. This curious detail of the landscape is linked, as the name suggests, to a legend that links the Grotta di San Michele to a cave with a large but not very extensive entrance, located opposite, at the Castrum Olibani or the ruins of the castle of Olevano . In fact, it is said that this was the first cave of the Archangel, while the current one, deeper and more majestic, belonged to Lucifer. The devil was finally evicted from San Michele with a powerful kick and, falling, impressed his goat footprint on that rock. The hollow is full of pebbles traditionally thrown by passers-by to ward off evil. The system consisting of the two cavities is of considerable palethnological, archaeological and historical interest. In the Grotta di S. Michele there are seven chapels, the most important of which has frescoes dating back to the VIII-XI centuries, in a style close to the Byzantine one, while the use of this rupestrian complex is attested starting from the century VII. The sequence of sacred buildings inside the cavity marks the ascensional path of the pilgrims who, following the morphology of the ground that seems to allude to a gradual spiritual elevation, when they reached the last chapel they left graffiti inscriptions in the plaster and laid stones as a penitential sign. Finally, they reached an artificial basin for the collection of dripping water, considered blessed and even miraculous. In 870 the monk Bernardo, who returned from the pilgrimage to the Holy Land and headed for Rome, stayed at the sanctuary. In his account he wrote of an uncomfortable itinerary through the forest that surrounds the cold and damp cavern, in which it is necessary to move with caution and make sure that the path on the slippery rocks is illuminated by a lantern: advice still valid today. But the most illustrious person who has reached the cave, appreciating the peace and beauty of the site, is San Gregorio VII. Tradition handed down the memory of it through the toponym “Pope’s garden”, attributed to a place adjacent to the entrance to the cave, where it is still possible to identify a kind of bench carved into the rock, the so-called “Pope’s seat”, which is believed was used by the pontiff who in 1084, freed and brought to Salerno by Roberto il Guiscardo to save him from the eventual arrival in Rome of the troops sent by the emperor Henry IV, tried to heal from his ailments in this healthy place relying on the hospitality of monks settled not far from the entrance of the cave, following the advice of the doctors of the Salernitana Medical School, but obtained only a temporary rest, since he died the following year, after returning to Salerno, where his remains are still kept. The site is still linked to the Michaelic cult: in spring the statue of the Archangel is carried in procession through the hamlets of Olevano. On the fourth Sunday of Lent the statue of the Archangel is taken from the cave and taken to Salitto, in the Church of the Madonna del Soccorso. On Monday in albis she is transferred to Ariano in the church of San Leone Magno. From here it passes to Monticelli, in the church dedicated to S. Marco, where it remains until the morning of May 8, when the most popular procession takes it back to the cave after having crossed the main hamlets again. In that of Cannabosto you stop to rest and, if necessary, refresh yourself, while mass is celebrated in a chapel. Then the last stage of the journey begins, which begins and ends accompanied by fireworks. On 29 September, the feast of St. Michael the Archangel, the patron saint is honored with a religious ceremony inside the cave consecrated to him. The musical aspect of the procession is very characteristic, which includes accompaniment to the sound of the fifes, a legacy of the ancient pastoral culture. It is no coincidence that the days dedicated to the saint coincide with the times of transhumance: the ascent to the mountain pastures in early spring and the return to the valley in early autumn.

San Michele: in the places and times of change | Chronicles Salerno