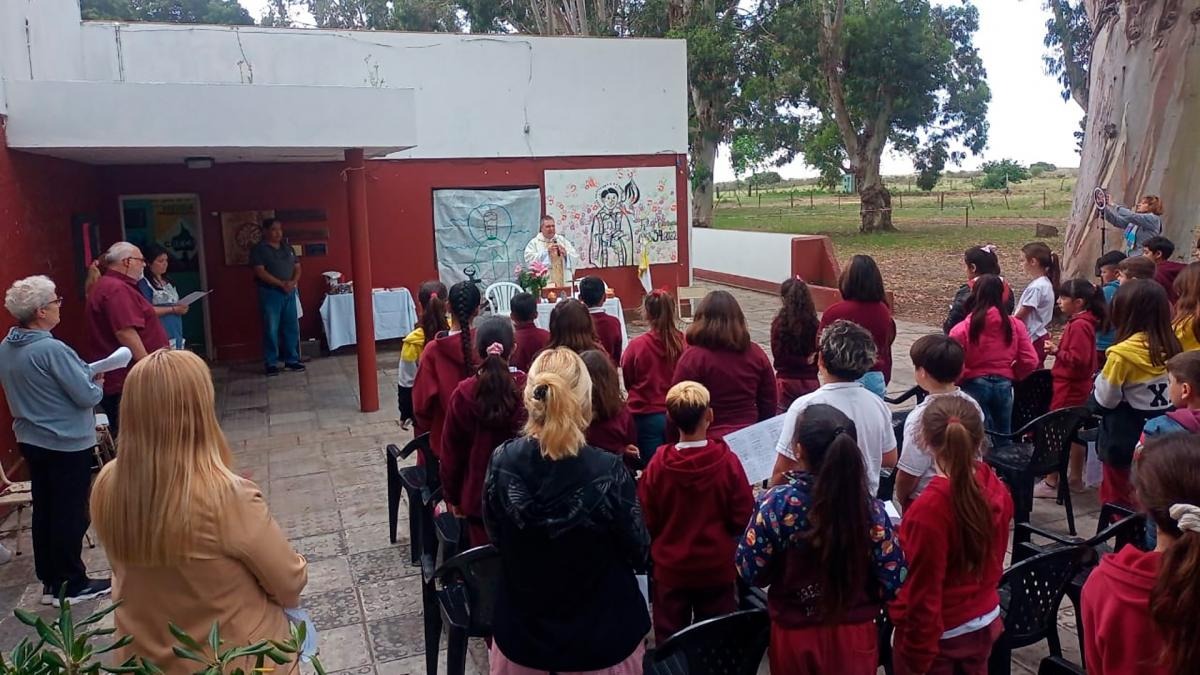 Mundo Marino is the emblem of San Clemente. For years more buses have arrived at the gates of the oceanarium, attached to the simple port of artisanal fishermen, than at the terminal of the first town on the Atlantic Coast. The attraction of the only captive orca in South America created the largest local business and power center in the area.

However, faith came first. His name proves it. San Clemente Romano, bishop of Rome and third successor of San Pedro, bears the name of the town with extensive beaches that join the fresh and brown waters of the Río de la Plata, with the wild waves of salt water.

Julio Aguiar, parish priest of the San Clemente Romano church, was appointed a couple of years ago in this town by Bishop Carlos Malfa. Since then he has put the church on the way out following the guidelines of Pope Francis’ magisterium that focuses the mission on the social and existential peripheries. For this reason, during the week of the Patronal Festival, masses were already held at the retirement center, as well as at the “Chichos” Canine Assistance Shelter, at the local hospital, at a solidarity cultural center, and adoration of the Blessed Sacrament with a concert by guitar in the parish

The most emotional moment was this Thursday the 17th, in the morning, in the periphery, and with the young people. In the area of ​​the Port and the “San Martín” neighborhood, in the northern part of the city where the workforce of the summer season lives; there, for 54 years, families have been able to send their children to the Ceferino Namuncura parochial school. Surrounded by large eucalyptus trees, a refuge for parrots, about fifty primary school boys participated in the mass celebrated by priest Aguiar. It was an interacted mass. One of the students answered a question with the keyword: “chapel”. Because the parish community accepted the initiative of the Franciscan Missionaries Movement, to build the house of God next to the school. “Just as you have classrooms to study and a house to live as a family. God wants a place to meet with you students, for the families of these neighborhoods and for all the visitors who pass through here (it is an area traveled by the path to the Ecological Reserve and the hot springs),” said the priest.

The mass ended with the boys walking with a banner of San Francisco de Asís and Santa Clara on one side, and Ceferino on the other, and with crosses in their hands (handcrafted by neighbors) going to the corner of the school grounds surrounded by scented eucalyptus. There the priest poured holy water, showed the blessed brick that will begin the construction of the house of God and an Our Father with a Hail Mary was prayed to make the dream of a chapel with open doors come true, which will bear the name of Ceferino Namuncura .

They did not take center stage but they are key in the process of the outgoing church. The militant couple, Ángel “Lito” Borello, a member of the Missionaries of Francisco, the group of lay people born in the heat of popular movements who feel in the Pope a spiritual-political guide, and Carina Maloberti, general secretary of ATE-SENASA. They did not choose the center. They went to the periphery where the artisanal fishermen live, who go out in pairs or three with small boats in search of exquisite and cheap mullets or black sea bass, which live among large plots of land where horses graze, which are helpful for family mobility and daily chores. . It was “Lito” and Carina who a year ago promoted “FOGATA-Cuidadores y Cuidadoras de la Casa Común” in a property facing the immense dunes of the Punta Rasa Reserve. There they have received Catholic high school students and members of the popular movements who around a campfire as a meeting place, listen and read the encyclical Laudato Si, and fly over the urgent agenda.

In San Clemente the abundance of creation springs from all sides. Also inequality in the distribution of goods. At the end of mass, at school, I hear a teacher say: “My students’ stomachs hurt. Not because they eat badly. But because they go days without eating.” The other teacher, with very slanted eyes and a light blue color, confessed that they have brought food to the homes of her students during the confinement of the pandemic. “We can’t sustain it with our salaries, what else can we do?” they told “Lito” and Carina. The other needs come from the school principal. Virginia told me that they have a half-finished classroom, since with the clubs and fairs they collect money to pay for the materials. In total more than 120 boys. They have only three classrooms. The older classes (4th, 5th and 6th) go in the morning and the 1st, 2nd and 3rd in the afternoon. Next door they have the kindergarten that is activated in the afternoon with 90 more children. The school is 100 percent subsidized and only 60 families can pay the fee. Some salaries of teachers (plastic and gymnastics) as well as the 13 assistants must cover it. Only God knows the economic ingenuity to run a school on the periphery of the Coast.

The first seaside resort on the Coast unites extremes. On the one hand, it honors the Roman saint and añ Tuyú, which is a word of Guarani origin, which means clay, mud, mud. This miscegenation continues in our times in San Clemente. The eagle shape as the city was built is a sign. God’s faithful people want to fly. From the mundane to the spiritual with more baptisms and communions without forgetting the cry of the poor and the cry of Mother Earth.

San Clemente: entrance to the Coast and to the popular faith