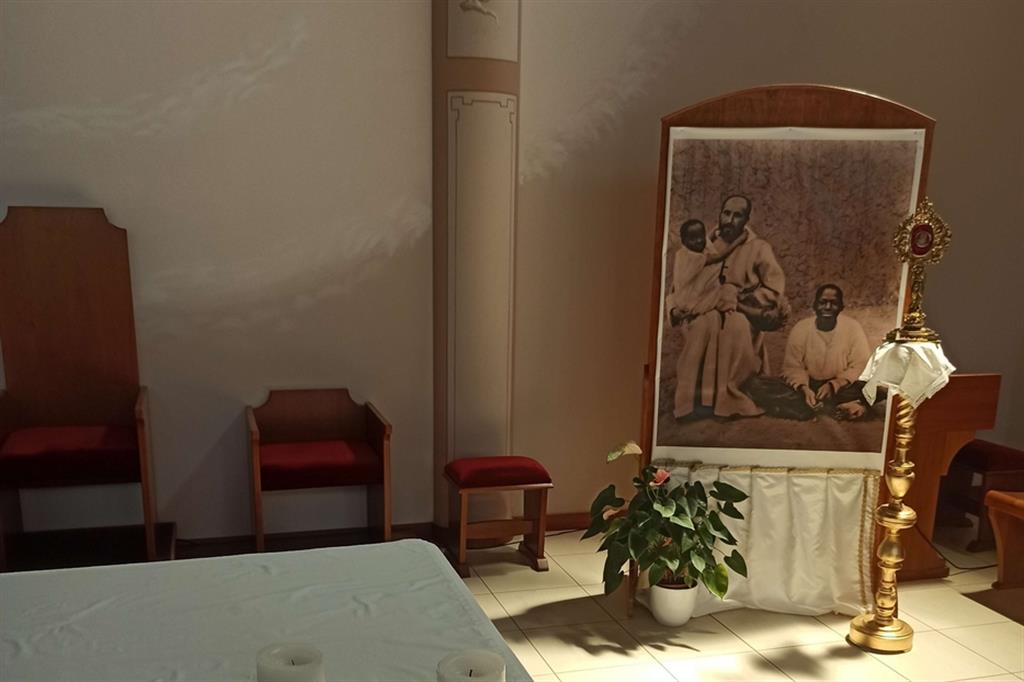 The image of St. Charles de Foucauld in the parish dedicated to him in Brindisi – Badaracchi

The first parish in Italy to be dedicated to San Carlo di Gesù (the name chosen by Charles de Foucauld after embarking on religious life), proclaimed a saint by Pope Francis on May 15, is located in the Rione Santa Chiara of Brindisi.

The canonical introduction of the parish priest Don Vito Paparella and the start of the parish took place on 1 July with a solemn Eucharistic celebration presided over by the archbishop of Brindisi-Ostuni, Domenico Caliandro, who on the day of the canonization of Charles de Foucauld had signed the canonical decree establishing the new parish.

In the text, the Archbishop of Brindisi recalled that “Brindisi, in the life of Saint Charles of Jesus, was an important step: from here, in February 1897, he embarked for Palestine where he lived in the hidden imitation of Jesus in Nazareth, realizing that love for Christ requires his radical imitation ».

Not only that: the prelate has identified a spiritual affinity between the saint and the venerable from Brindisi Matteo Farina, who died at the age of 18 in 2009 of a brain tumor. “Both had in mind the desire to cry out the Gospel with their lives – writes the archbishop of Brindisi-Ostuni -, wanting to be an evangelizing presence in contexts far from Christ and his Church: the Tuareg for Saint Charles of Jesus and peers for the venerable Matteo Farina ».

In the words pronounced at the end of Mass on 1 July in the new parish of Brindisi, Don Paparella recalled how the community is “also under the protection of our brother from Brindisi Matteo Farina who, with brother Carlo, shares the immeasurable love for Christ, the desire for universal brotherhood ”, emphasizing that“ dedicating a parish to a saint is not the same as giving a name to a street in the city ”.

When he was a layman in search, at the end of the 1980s, the then young Vito Paparella was introduced to the spirituality of the new saint thanks to his parish priest from Bari, Don Luigi Spaltra. Today, at the age of 54, he finds himself leading the community “on a journey that calls us to the commitment to be welcoming”.

The priest is already in contact with the Little Brothers of Jesus Caritas, the Disciples of the Gospel and the Little Sisters of Jesus for future testimonies on the living charism of St. Charles de Foucauld, universal brother in dialogue with everyone who illuminates the first steps of the parish, urged to confront in the territory with poverty and believers of other religions. In fact, the parish is set in the “Benedict XVI” pastoral center, which includes the diocesan Caritas and the voluntary association “Parrocchia solidali Brindisi” which run a canteen for the poor, as well as a meeting place (Seminario San Giuseppe) for young people in search of their own vocation. “If we do not live by the Gospel, Jesus does not live in us” wrote Brother Charles.

“He established a deep relationship with Christ and flourished, despite his death in the desert. But the power of prayer goes beyond all boundaries ”, highlights Don Paparella. And at the end of each Mass, the famous “Prayer of abandonment” of St. Charles de Foucauld resounds in the church: a program of life suggested to every faithful of the newly born community “who entrust himself to him to be open without” ifs “and without “but””.