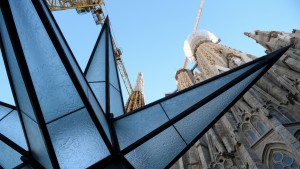 Touched by a Church undermined by scandals, in search of consolation, Tugdual Derville sees in the construction of the Sagrada Familia a model enterprise of repair marked by the madness of the Gospel. The vitality of this work of ecology of beauty is capable of restoring our inner flame.

One day, the young Francis of Assisi heard the Crucified whom he prayed to ask him to “rebuild his house in ruins”. It was in 1205 in the dilapidated Saint-Damien chapel. François then undertakes his restoration with his friends, thanks to the money from his father’s sheets. Much later, when death draws near, the one who has become Brother François composes his Song of the Creatures. He understood in the meantime that the Lord’s request was much more vast and universal: it was the Church of his time that threatened ruin and deserved reparation. François had contributed to it.

Today, the spirit of ruin lurks in the heart of the Church, especially in France. Ruin linked to abuses and their revelation, to the extinction of a good part of popular fervor, to the collapse of priestly vocations, but also to the explosion of many couples and families. The message of the Gospel is sometimes made inaudible because of those who are responsible for carrying it and the ravages of Modernity. The building is cracking. It is to be restored. Such an observation of course requires in-depth reflection and concrete actions in terms of governance in particular. But where to draw their inspiration?

In search of consolation, I am thinking a lot these days of an enterprise of reparation marked by the madness of the Gospel: the construction of an extraordinary basilica in Barcelona, ​​the Sagrada Familia, precisely called “Expiatory Temple of the Holy Family “. The already famous edifice, still unfinished, does not claim to respond to the scandals in which the Church seems entangled, nor to cleanse it of the accumulation of our sins. However, I see in it a refreshing icon of hope. The vitality of his story is capable of giving us back the inner flame that would be in danger of being extinguished if we only looked at the surrounding darkness.

The construction of Sagrada Familia is the archetype of a proliferation of human ecology. It unfolds in a specific historical and geographical context — the natural and cultural ecosystem of the Catalan capital on the shores of the Mediterranean — while having a universal symbolic and spiritual significance. The most visited monument in Spain, the Sagrada Familia is already listed as a World Heritage Site. The motive of its construction reflects the eminent position, at the heart of Creation to which it pays homage, of the human being: embellishment, seeker of meaning, embodied and spiritual being at the same time. For one hundred and forty years, the immense sanctuary, ready to welcome 14,000 faithful, has been built to the rhythm of the vicissitudes of human history: stopped by war, subject to the vagaries of the generosity of donors, a time slowed down by the pandemic, it was consecrated by Pope Benedict XVI in 2010 after it had been open for worship for some time.

This bewildering project was born in the heart of a man, the Catalan architect Antoni Gaudi, who is buried in his crypt. How does it come about that a brotherhood, the Association of the Devotees of Saint-Joseph, decided to build a church which risked being simply neo-Gothic in the hands of a first architect, trusted in the pharaonic project of this man of only 31? year ? Started in 1882, its Sagrada Familia is the heart of a district of the big city, adorned moreover with multiple buildings designed by this Catalan genius. It seems that the Catalan soul partly explains why such madness was possible. I suppose that if it had been considered on the side of France, many of us would have cried foul. Gaudi’s work is a snub to narrow conservatism. But it is no less rooted in the great tradition of cathedral builders. Like them, Gaudi inaugurated a process and then faded into death. Time is greater than space: at the time of “everything, immediately” the building will have taken a century and a half to be erected. What an “atonement” for our sins of impatience, precipitation, forced acceleration! And the realization of this project is more like the organic growth of a tree than the assembly of a machine.

When the last and tallest tower is completed—in a few years, God willing—it will nevertheless be the tallest church in the world. This is to say the ambition of its designer. He did not skimp on the means, opting for noble materials, while counting only on alms for financing, then by his visitors, the basilica being expiatory, like that of the Sacred Heart in Paris. Since the building is visited by millions of people every year, the work is progressing well. Gaudi had understood that, as in the time of our Gothic cathedrals, he would not see his work completed here below. He then organized the work – devoting himself to it full-time for the last twelve years of his life – in such a way that his future builders did not give up his ambition by limiting himself to one nave. The architect died at the age of 73, in 1926, knocked down by a tram. His successors have… succeeded each other, several generations continuing the work by adding their personal touch, especially since the designer’s plans and models were lost or damaged during the Spanish Civil War.

Close to his death, Gaudi, an ascetic and mystical man, whose process for beatification is ongoing, affirmed: “The man without religion is a spiritually handicapped, a mutilated man. »

Gaudi was single: what fertility! A seeker of God, his faith became more rooted as his basilica rose: he designed it as an open-air liturgical catechism with its twelve towers of the apostles, overhung by four towers of the evangelists. The tower of the Blessed Virgin, adorned with a luminous star – inaugurated in 2021 – will be overlooked by the tower of Jesus Christ and its large cross. But the height of the building: 172.5 meters, will remain one meter lower than that of Mount Montjuïc which dominates Barcelona. The Babel syndrome and its spirit of grandeur are exorcised: the work of man does not want to claim to surpass that of his Creator. Close to his death, Gaudi, an ascetic and mystical man, whose process for beatification is ongoing, affirmed: “The man without religion is a spiritually handicapped, a mutilated man. »

The ecology of beauty

A lover of Creation, without disdaining abstraction, he is not only inspired by holy texts and the liturgy, he associates them with the nearby sea, mountains, trees and animals which he incorporates into his work. “The universe unfolds in God, who fills it entirely. There is therefore a mysticism in a leaf, in a path, in the dew, in the face of the poor,” underlines Pope Francis (Laudato si’, 233). The experience of visiting the Sagrada Familia is capable of reconciling with many things: the architecture of the 19th and 20th centuries, the history of the Church, but also the audacity of men. And above all faith! The interior of the building offers an unforgettable aesthetic and mystical experience. It is spiritual fireworks. We enter a luminous forest populated by biblical characters, saints, animals, plants. The ecology of beauty, an ecology that is poetic, liturgical and spiritual at the same time, has nothing incompatible with its scientific counterpart. One needs the other so that they together deserve the qualifier of integral.

Between the small chapel of San Damiano restored in the 13th century and the tallest church in the world in the process of being completed, which everything seems to oppose, resounds the same salutary mystique, that of the song of songs “The great richness of Christian spirituality, generated by twenty centuries of personal and community experiences, offers a fine contribution to the attempt to renew humanity. […] It will not be possible, in fact, to engage in great things only with doctrines, without a mystique that animates us, without “the inner motives that drive, motivate, encourage and give meaning to personal and community action ”” (Laudato si’216).

Ruin or hope? May the Sagrada Familia inspire us!