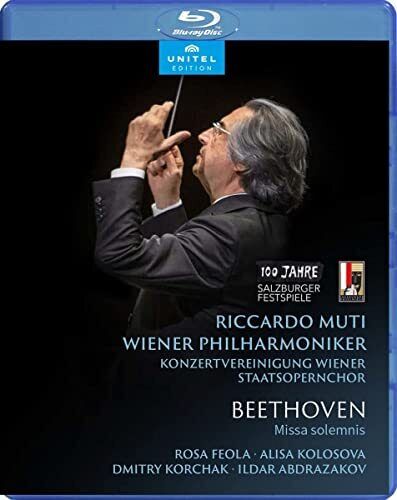 Recorded in 2021 on the occasion of the centenary of the Salzburg Festival, this missa solemnis by Beethoven conducted by Riccardo Mutiat the head of theVienna Philharmonic Orchestra bitterly disappoints despite the notoriety of the speakers.

How many superlatives have been used to qualify this extraordinary Mass, composed between 1818 and 1823, dedicated to his pupil the Archduke Rudolph, entirely elevated to the glory of music, man and God , all three brought together by the master of Bonn in the same incomparable masterpiece, gigantic both in its colossal dimensions and in its depth of inspiration. A work that combines theatricality and spirituality, constituting a real challenge for all the conductors who have confronted it to such an extent that Furtwängler studied it all his life but no longer dared to conduct it after 1930…

A difficult piece of work that requires complete commitment from the soloists, the choir… and the conductor! It is necessary to recognize that Riccardo Muti fails to rise to the level of the task, remaining without inspiration, nose in the score, lavishing an approximate direction, without any nuance which is reduced to a few wick effects! If the first measures of the Kyrie, purely instrumental seduce by their fervor as well as by the legato and the silkiness of the strings of the Wiener Philharmoniker (it will be the only time when we will have the joy of hearing them…) the enchantment quickly fades to give way to the greatest confusion and at the rat race as soon as the soloists and the choir enter: from then on the choir of the Vienna Opera, whose polyphony seems very opaque, varying the nuances from forte to fortissimo, escapes all control by carrying away everything in its path, drowning out the soloists who become perfectly inaudible despite painful efforts to force their voices out of the surrounding noise and fury, while the orchestra unfortunately points to absent subscribers, reduced to thin rhythmic support. In this cacophony, the poignant plea of ​​the Kyrie quickly turns into vociferation as the majesty of the Gloria is penalized by an overwhelming heaviness which completely erases the painful imploration of the Qui tollis peccata mundi. The Creed, alas, is no better off, lacking in color, strictly monochrome, without paroxysmal dazzling or mysterious internalization, each playing for himself in this sonic magma… So, do we wonder? Lack of balance in the sound recording or poor management of the balance between orchestra, choir and soloists, we can not say so much we remain amazed in front of this disconcerting calamitous interpretation which clearly signs a lack of preparation of the Italian conductor, yet rightly recognized as a great opera conductor!

You will have to wait for the sanctus and the Benedictus to regain a little footing, the only movement where the orchestra resurfaces a little (violas, flute and clarinet) from which emerges painfully the ethereal song of the solo violin and the interventions of the vocal quartet. L’Agnus deimore convincing, finally brings together the forces present (choir, soloists and orchestra) in a semblance of balance imbued with anguish, supplication then serenity where the fanfares and a high quality vocal quartet made up of the soprano clearly stand out Rosa Feolafrom the contralto Alisa Kolosovatenor Dmitry Korchak and bass Ildar Abdrazakov for whom it is very difficult given the circumstances to give any appreciation and who must bitterly regret having allowed themselves to embark on such a mess… Too bad!

Riccardo Muti in Beethoven’s Missa solemnis: The Sound and the Fury – ResMusica