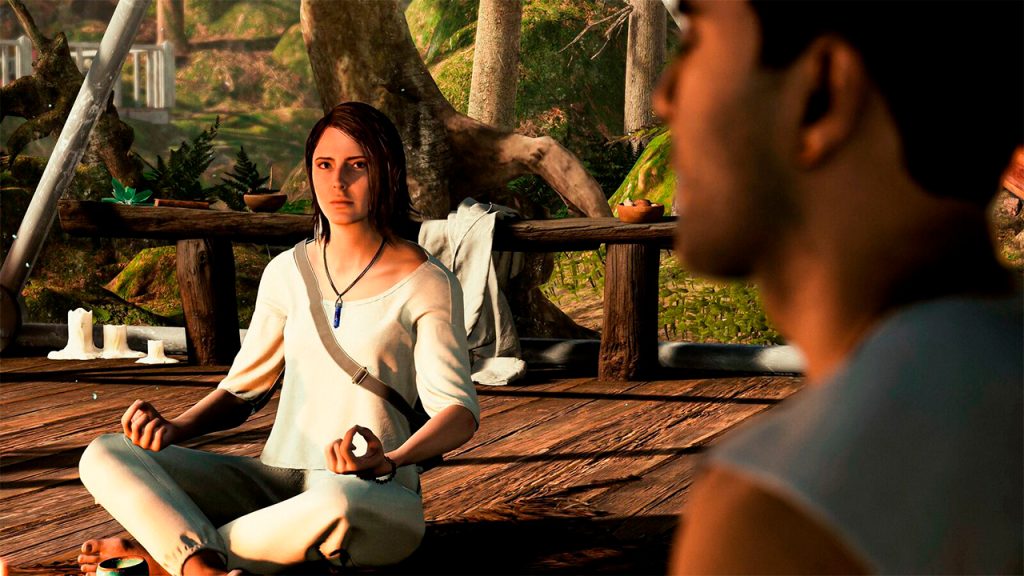 Last November 3 the video game arrived The Chant. A new survival horror experience that leads us to try to survive on a strange island. It should be noted that this is full of cosmic terrors that players will have to deal with cunningly.

Now that we’ve had a chance to play it, we’re sharing what we thought of this psychedelic horror odyssey. In case you had in mind to give a terrifying game outside of the classics a chance.

The story of The Chant is somewhat familiar

The Chant It begins with our protagonist Jessica, who decides to attend the island of Glory. Here is a spiritual retreat which she hopes will help her with the trauma of a tragedy from her past. However, once a ritual goes awry, the entire island seems to descend into a spectral environment.

Although the story falls into some clichés, it remains one of the strongest parts of the game. This is more for the characters that are with you on the island. You get to know the backgrounds of many of them and they become quite interesting. One even made us feel shocked, but at the same time aware that something like this could happen in real life.

The mystery at the bottom of The Chant it’s also something that keeps you somewhat hooked. Especially since there are a good amount of texts and films that give more context to this world. Which in turn invites you to explore the island for more information.

We should also applaud The Chant manages to separate itself from other horror stories thanks to its premise. Since his terror has more to do with the subject of prisms and homeopathy. But they manage to make such an insignificant subject something terrifying.

The gameplay of The Chant focuses on the survival horror aspect. Since here the players will have to be looking for resources to survive. These are very scarce and there are quite a few enemies. So sometimes you have to decide whether to run or fight with what you have.

The combat is simple and in order to defend yourself you must make different melee weapons. These in turn are divided into different types, which do different levels of damage to enemies. Some are more effective with ‘earthly’ enemies and others deal more damage to spiritual ones.. As you explore you can find pages of a bestiary that will give you instructions on how to defeat the different enemies.

In addition to melee weapons, you have oils and salts that have different effects. Salts can work to distract them momentarily. As for the oils, there are two types in The Chant: one that slows down enemies and one that sets them on fire. It is worth mentioning that both salts and oils can be spread on the ground to act as traps for enemies.

As the story progresses you also get prisms that can be used in combat. One of them spawns spikes around you, another knocks enemies back, and yet another slows them down. Using them will cause you to lower one of the three bars you should be paying attention to.

In The Chant You will have to pay attention to three different bars: the one of life, the one of mind and the one of spirituality. The health is decreased when you receive attacks from enemies, while the mind is decreased in stressful situations. If the mind reaches zero, then the protagonist goes into a panic attack and cannot defend herself for a while.

This is where spirituality comes in. You can sacrifice some of it by meditating to replenish your mind bar. Although the spirituality bar also serves to activate the prisms, so take some strategy dyes. Of course you can also replenish each of the three bars with medicinal plants. But these are quite rare.

You will also find some objects that will allow you to level up. This is with a skill tree where you can choose if you have more stamina or if plants make you recover more stuff. Although he does feel some progression, at no time does that feeling of feeling vulnerable disappear

The Chant It presents us with a rather gloomy atmosphere that reminded us a bit of titles like Silent Hill. It is really interesting to explore the island trying to solve the central mystery. Not to mention, there are some enemy spawns that are sure to take you by surprise.

Unfortunately we ran into some technical issues while playing. One of the most noticeable and frequent was the fact that the background music would stop abruptly. In addition, it did so with a sound that would indicate some type of error.

Also sometimes the character models come to look strange, which takes away from the fear factor. A scene that should be something shocking turns into something funny due to errors in the faces of the characters.

Despite its flaws on the technical side, it seemed to us that The Chant it’s a pretty solid experience. Although it is noted that its budget is not the largest, it is possible to glimpse the effort of its developers in other aspects.

Should you play The Chant?

It seems to us that The Chant is a game that could be very attractive for lovers of horror and survival horror. Its setting and story stand out because they don’t look that much like things we’ve seen before. Despite the fact that in the narrative aspect it touches some clichés.

Its gameplay is quite varied in a semi-open world, which helps keep you entertained until you reach its end. So surely you won’t regret giving it a try. If you dare to try it, do not forget to share with us what you think in our Discord.

We played The Chant on PlayStation 5 with a code provided by a Prime Matter representative in the region.