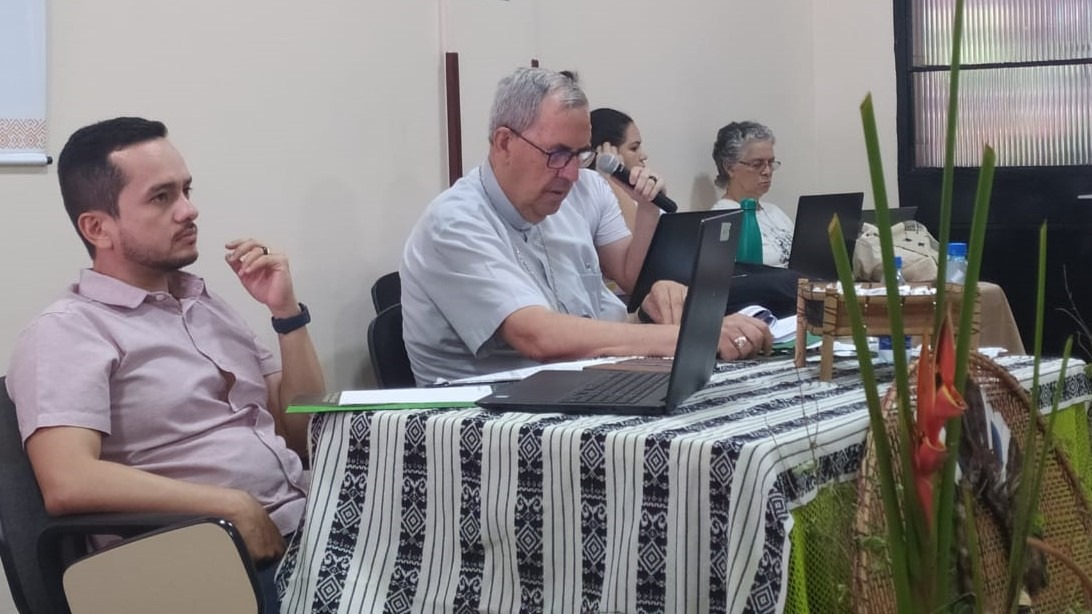 It is about “working in a network that day by day weaves the future of our land in different spaces and realities with common care through an integral ecology as the encyclical Laudato si, inspiration for our doing and living, asks us”

It is about “working in a network that day by day weaves the future of our land in different spaces and realities with common care through an integral ecology as the encyclical Laudato si, inspiration for our doing and living, asks us”

Discerning the mission of the Church in the Amazon, a joint effort between REPAM and CEAMA

The Pan-Amazonian Ecclesial Network wants to be a source of life in the Pan-Amazon region and for its sake seek new paths for the Church and for an integral ecologywords that its president recalled at the end of the Extended Committee that took place in Manaus on November 10 and 11, 2022.

At the service of the people of God in the Amazon

Taking into account the urgent challenge of protecting our common home, which includes the concern of uniting the human family in the search for sustainable and integral development, since we know that things can change, words present in the Encyclical Laudato Si, Mons. Rafael Cob stood out as a common ideal “service to the people of God in the Amazon”, which according to the bishop of the Vicariate of Puyo, “becomes a new shared and articulated space in a coordinated work to respond to the great challenges that our peoples and the territory where they live have”.

Is about “work in a network that day by day weaves the future of our land in different spaces and realities with common care through an integral ecology as the encyclical Laudato si asks of us, inspiration for our doing and living”, insisted Msgr. Cob, who, acknowledging the path traveled, saw how much remains to be done, since in a context of death we seek to respond to “an urgent need every stronger for all humanity.

The bishop sees mysticism and spirituality as necessary conditions for “sustain joint and network work”. An ecological spirituality, with “a permanent contemplative look to see the socio-environmental crisis situation on our planet”, called to make a stop in the destructive race of our environment, something that he considers obligatory in the face of irresponsible and voracious consumerism.

The president of REPAM sees reasons for hope in networking, in scientific research and in the dialogue of knowledge, in the paths of conversion that lead the human being to accept that he is not the lord and owner of creation, but rather the administrator and caretaker. of this common home whose life must be sustained and defended. An ecological mystique that “It must challenge us in the way we think and how we act, inspired by the paradigm of an integral ecology.”, he insisted. From there he put the spirituality of sacrifice and austerity as a path, together with “a Creator and Provident Father God who wants to walk with us.”

Walking with the universal Church

A REPAM that wants to walk with the universal Church, something that is evident in the fact of assuming the protection policy for children, adolescents and vulnerable adultsshowing the scope, implementation, approval, formation of the protection and training committee.

The same can be said in relation to the Synod on Synodality, where REPAM and CEAMA want to offer a joint reflection on what is understood by synodality from the pastoral practice of the Church in the Amazon. It seeks to show what this way of being the Church itself has been in these three years, making visible new subjects and learning. Starting from the innovative practices, having the Final Document and Querida Amazonía as references, as well as the Working Document for the continental stage and its process of listening, dialogue and discernment. Something that will be carried out differently in each of the continents and that in Latin America and the Caribbean will take place in 4 assemblies, insisting on the importance of the contribution of the Amazon.

From there we will walk next year having emergencies related to Human Rights and Socio-environmental Justiceas a strategy the presence in the territory, as protagonists women and young people, seeking to discern the mission of the Church in the Amazon, a joint work between REPAM and CEAMA, counting as priority services training, communication, networks and political advocacy.

REPAM: continue the common ideal of service to the people of God in the Amazon