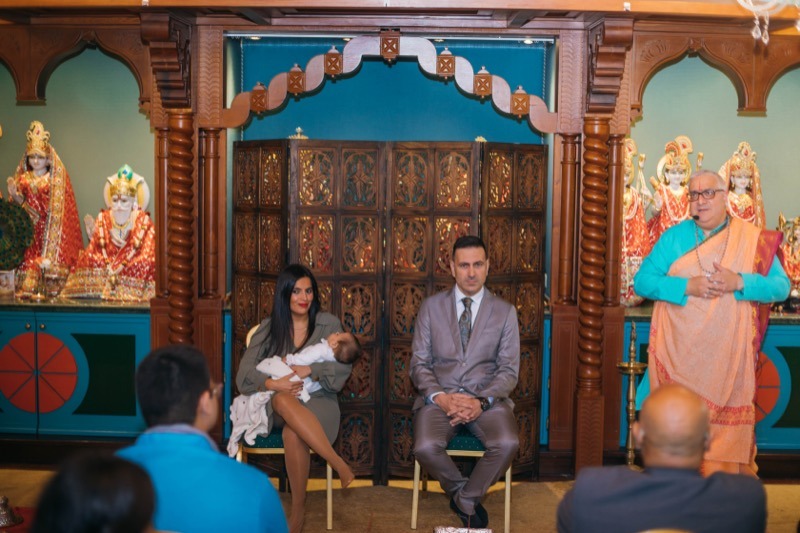 On Saturday, November 19, the Hindu priest from Ceuta Juan Carlos Ramchandani (Pandit Krishna Kripa Dasa) officiated the ceremony of nama karana samskara or sacrament of the naming ceremony. One of the main rites of passage in Hinduism, where the boy or girl is named. The purohite (Hindu priest) elaborates the janam-patri or birth chart of the newborn, and according to the constellation that governs at the time of birth, a certain letter appears with which the name must begin.

This ceremony is usually held 11, 21 or 31 days after birth, but sometimes for reasons of force majeure it can be performed at a later date. The ceremony was held at the hindu temple of our city and it was for the son of the interreligious couple formed by Raúl Chenard Palomino and Guita Badammal Sunderdas. They were accompanied by her parents: Dayal Badammal and Minu Sunderdas and his brothers: Anselmo and Guadalupe Chenard Palomino who acted as parents as they were already deceased. Family members and friends of both families also attended, who did not want to miss such an auspicious ceremony.

The ceremony began with a brief explanation by the puróhita, then the father pronounced the name three times in the child’s right ear and then announced it to those present. The name chosen by the parents has been Krishna Kumar. Krishna Kumar is a Sanskrit name made up of two words: Krishna which is a name of God and means “the supremely attractive one” and Kumar which is a suffix or title (used in ancient times by Hindu royalty) Kumar also means child.

Then he nanaji (maternal grandfather in Hindi) put some honey on little Krishna Kumar’s tongue. Grandma, great-grandma and godparents splashed with grass kusha and holy water to the child. Both rites are to bring sweetness and protection in the life of the child. 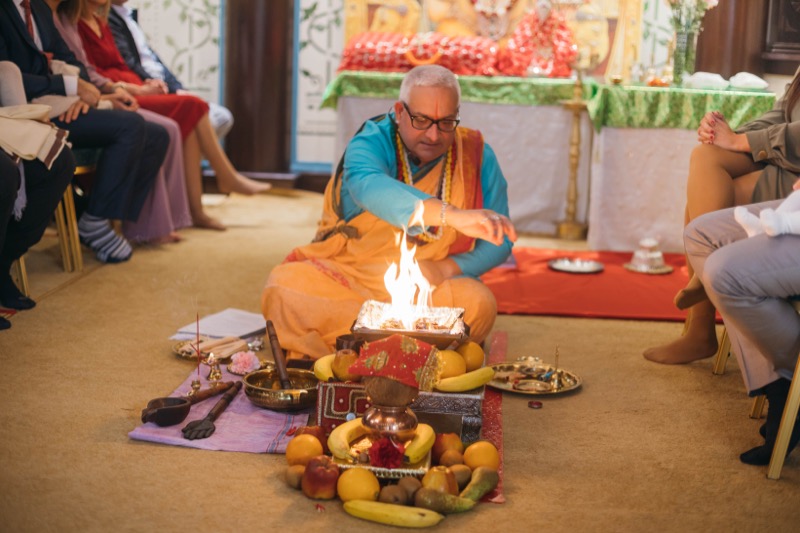 As Krishna Kumar has completed six months he also made the samskara by anna-prashana or ceremony where the child is given the first semi-solid foods and cereals. This honor was in charge of the parents, grandparents and great-grandmother.

Then the Pandit officiated the Homa or fire ceremony, where offerings are made to the fire of ghee (clarified butter), rice grains and aromatic herbs. Ramchandani recite in Sanskrit mantras (sacred words) for the blessing and protection of Krishna Kumar. Before the final offering, all attendees participated in the recitation of the maha mantra. Little Krishna Kumar and all present were yoked with the tilak or sacred mark made with the ashes of the ceremony.

The final part of the ceremony was to check the future qualities of Krishna Kumar. Three objects are placed on a cloth: a sacred book, a plate with rice and another with coins. If the boy takes the book it is said that he will be a great scholar, if he takes the rice he will have very good health and if he takes the money he will be a good merchant. Krishna Kumar touched a little of the three with which we wish him health, prosperity and fulfill his religious duties. Krishna Kumar’s cousin also participated in this ceremony: Tarun, son of Piku and Vero, who went straight for the coins and then the holy book. Causing laughter and good comments from the attendees.

The act ended with a family photo and the distribution of prashad (blessed food).

Ramchandani told us: “The Nama-karana ceremony is one of the main samskaras or sacraments of Hinduism, because through the name, the child or an adult is given an “official” welcome in Hindu spirituality. It is always pleasant to officiate ceremonies, but those that I do for people I have known for many years, such as Dayal and Minu’s family, are very special. My blessings to Krishna Kumar have been krishne matir astu” which means that you always remember God and “ayushmam bhava” which means may you always be in good health.