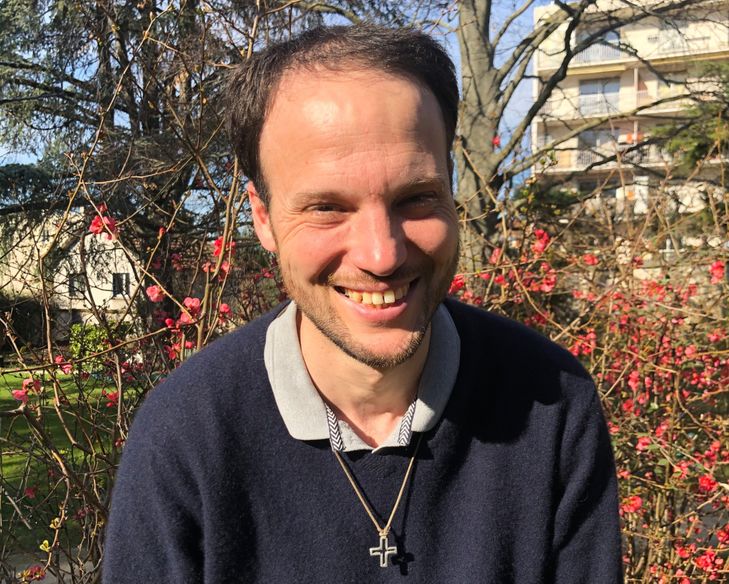 Xavier de Bénazé, Jesuit: “I have been sent to explore the links between Ignatian spirituality and integral ecology in the Jesuit spiritual center of Le Châtelard, near Lyon. The field to explore is immense! / Source: X. de Bénazé

The Jesuit Xavier de Benaze is delegated Laudato si’ of the Provincial of the French-speaking Western Europe region (EOF). Its mission is to coordinate the efforts of Jesuits and their networks (schools, spiritual centers, coworking Magis etc.) around ecological conversion.

Drought, fires, hail and devastating storms… In France, the summer of 2022 will have made an impression on environmental issues. 1er September, Pope Francis calls for a worldwide day of prayer for the care of Creation. How can prayer help in this context?

Praying for our relationship to ourselves, to others and to Creation, in the form of praise or intercession, causes us to readjust fundamentally to our relationship to God and, from there, to the other three relationships. More concretely, praying for those who will have difficulty paying their heating bills next winter, or for those displaced because their land is on fire or drowning under water, or for the ecosystems which die in the heat wave can lead us to question our behavior and decide to act. The hands of God in this world are us today!

But is it worth praying for an earth whose lifespan may be limited? What does Creation represent in God’s plan of salvation?

X. of B.: God’s plan of salvation encompasses all of Creation. If men and women are to be saved body and soul, spirit and matter, if we want to use a language derived from Greek philosophy, we do not see why God’s plan of salvation would set them apart from the rest of the body. and matter of Creation. Saint Paul thus speaks in Romans, chapter 8, of the groans of Creation and of humans who together hope for Salvation. What Tradition, following Gregory of Nyssa, retained under the name ofapocatastasis and which comes up today in discussions between eco-theologians to talk about the salvation of all creatures.

You were talking about prayer of praise or intercession. What form can it take?

X. of B. I find that the covenant prayer that Saint Ignatius of Loyola invites us to practice every day is very suitable for the prayer for Creation. It is structured around three simple words: thank you, forgiveness, please, which come in three forms of prayer: praise (thank you), recognition of one’s faults before the mercy of God (pardon) and prayer of request ( please).

The first step is praise which expresses gratitude. Above all, it allows us to taste the fundamental goodness of God and of the life that he freely gives us. A welcome anchor to face the harshness of events. We can thus give thanks daily for the gift of God which is Creation at the foot of a tree in a park, by observing the birds, by working in the garden, by spending time with the family…

By educating us to receive Creation as a divine and marvelous gift, the prayer of praise leads us to reconsider our place and our behavior within Creation, which is not an inert matter that can be manipulated as we please. To love and respect “Sister our mother the earth”, as Saint Francis of Assisi said: a creature like us, but also a mother, the ecosystem that gives us life and in which we are part.

And the second step?

X. of B.: It is the request for forgiveness, which consists first of all in recognizing one’s personal situation and responsibility, as well as the unjust collective choices in which one is caught and which provoke ” the clamor of the earth and the clamor of the poor » (Laudato si’ n°49). To do this, doing your carbon footprint (1) can be a great help. In what areas do we tend to overconsume? Heating, food, low-carbon travel (car, plane), time spent in front of screens or futile shopping?

Assessing your carbon footprint at your level and deciding to do without your car can also help raise awareness of broader injustices, such as the fact that kerosene is not taxed when it is the richest who take the plane. And to engage then, why not, in a broader social combat than our only private sphere. Because after awareness, it is good to get closer to others to act with them (2).

What does the prayer of petition bring in the third stage?

X. of B.: After gratitude and asking for forgiveness, comes the time for the future. We can find a source of joy in the crisis, if it reconnects us to a greater attention to Creation, if it allows us to regain access to God’s forgiveness by modifying our ways of living with others… In prayer, we can ask God for his help in deciding to live with less heating, less meat on the table, more ties to people in the neighborhood, to creatures in our territory… These are choices that we can ask to live as acts of justice and love for others and for our world, rather than bullying. We ask for a grace for tomorrow.

As for intercessory prayer, which is a prayer of petition for others and for the world, it is an act of faith in a God who became man, a God who does not dwell in his bubble, a God who has the heart of a Father touched by the cry of prayer. It nourishes our relationship with God.

Is this attention to Creation in the Church as recent as it seems?

X. of B.: In reality, it has been expressed for a long time, in different ways. We have mentioned Saint Paul or the Greek Fathers. One thinks of course of Saint Francis of Assisi. But another great figure, Saint Hildegard of Bingen, inspires many people, even in non-Catholic circles.

In its tradition, the Church also keeps a treasure of liturgical prayers, for the rain or for the harvests for example. Note also that when we celebrate the Eucharist together, at the offertory, it is all of Creation that is brought to the altar, with the fruits of the earth, of the vine, of the work of men and women. … And every other Sunday and on feast days, during lauds (morning prayer), the liturgy of the hours invites Christians to pray with the canticle “of the three children” (cf. Daniel 3). Like the Canticle of the Creatures by Saint Francis of Assisi, that of the “three children” incorporates us into the orchestra of the voices of Creation, praying not for it, but with it…

In certain monasteries, in Pierre-qui-Vire, in Taulignan, in Boulaur, it is in the ways of life that a real ecological concern manifests itself. Many monasteries in France are refocusing on the monastic motto ora and labora, “pray and work”. Monks and nuns take a vow of stability, they take root in their territory, work in agriculture or crafts, live in great sobriety… Lay communities are also being created in the same spirit. They are places where Christians can go to find resources and inspiration (3).

What hope can Christianity offer in these times of crisis?

X. of B.: I take part in many conferences or debates in Christian circles, and I often have the impression that hope is for some a kind of magic wand: it would be enough to say that “we have hope” for everything to go well. good. Like the prophet Jeremiah who, at the time of the second exile, promises that a small remnant of Israel will return. He will come back, yes, but eighty years later! In the meantime, for Jerusalem falling to ruins and for all those who have just left, how does this end? We have to stop paying for words. On the other hand, we can say that any act of love, and therefore of justice, made today, has the value of eternity.

This act of believing can help a Christian weather the storm, and others with him. It arises from the fundamentals of Christian faith and hope which are the Passion, Death and Resurrection of Christ. How do we know how to give an account of this hope to our contemporaries? In our daily life, personal or social, what would we call death and resurrection, even if they are only images or analogies? The Christian hope is that we will return forever, and Creation with us, to what founds us: the love of God to which we are called. Love that we are invited to embody in acts of justice and love, for others and for Creation, now and here below.

EDITORIAL.
→ Enter into resonance with all of Creation
→ Watch over all the living
→ Sister water, useful and precious

VIDEO. Did God miss his creation?