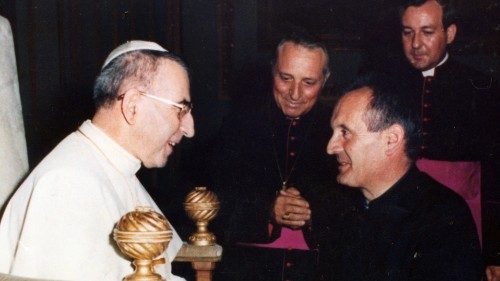 A family memory of John Paul I, ahead of the beatification ceremony scheduled for next September 4: the testimony of the daughter of the brother of the Venetian Pontiff, Amalia Luciani, who recalls some personal anecdotes

“With his nieces and nephews he was a special uncle, one of those that everyone would like to have.” This is what Amalia Luciani affirms, who, recalling some personal memories, speaks of John Paul I’s family appearance. “When he returned home – to Canale d’Agordo – he never reproached anyone for anything, to the limit he had a serious and worried face, but then he always smiled back”, adds the daughter of Edoardo Luciani, brother of the Venetian Pope.

It was the summer of 1978 when he met his uncle for the last time before his departure for the Conclave. He took her in his car from Canale d’Agordo to Belluno, where he worked and lived. On the way, the then Patriarch of Venice asked her if she could come and bless her house. But, for reasons of time, he replied that it would be better to do it at another time. “There may not be a next time,” the future Pontiff replied almost prophetically. “He asked me -he continues- if he had hung a crucifix at home and, to my affirmative answer, he added that then it was as if he had already come to bless her”.

Before the imminence of the beatification, we publish the words pronounced on June 29, 1968 by the then Bishop of Vittorio Veneto, on the occasion of the ordination of Father …

Amalia gets emotional thinking about the photograph of John Paul I that is still hanging in her house today. And she remembers, in particular, the times that she slept on the couch during some crisis moments in her marriage: “I always looked at that picture, saying: ‘keep blessing my house'”.

The testimony of Pope Luciani’s niece will be broadcast during the “Juan Pablo I Beato” program, which will be broadcast on Telepace starting at 8:30 p.m. on Thursday, September 1, on the eve of the press conference to present the beatification of the Pope John Paul I, which will take place on the morning of Friday, September 2, at the Vatican Press Office. The evening, hosted by the journalist Giacomo Biancardi, will take place in the presence of various guests and with various contributions recorded on video, including the interview with Amalia.

A story, that of Amalia Luciani, which also dwells on the stories of her father Edoardo, five years younger than the Pontiff. “The two of them,” she says, “were on the same page, almost like two friends who want to get up to mischief together.” One wonders if Albino Luciani, already as a child, showed premonitory signs of his future. “Not at all,” answers Mrs. Luciani, smiling, as she recounts how the two brothers used to play with the other Canale children and, in particular, the episode of the treasure hunt that ended with a raffle. “You took out a piece of paper and won a toy made with a pineapple or a pencil, but there were girls who had their father in the United States who sent them chocolate.

When it was time to take out the prize, the young Albino made a sign to his brother -who still couldn’t read- to take out a particular piece of paper, and he did the same. So they both won two pieces of chocolate. “My father,” he continued, “asked him how he had done it. And he revealed the trick: “He had found a way to write the award out of the piece of paper.” According to Amalia Luciani, in the end, this anecdote testifies that “everyone The world can become holy: you just have to want it and commit yourself”. A horizon that concerns the life of each baptized person and that could receive a particular boost by rediscovering and studying the biography and spirituality of the Venetian Pontiff.